The location of the Auckland Volunteer Reserve Division HMNZS Ngapona at St Mary’s Bay is due to the efforts of one man, Charles Palmer, the father of the Naval Volunteer Reserves in New Zealand. On 17 November 1924 Commander Middleton was appointed as Commander of the RNVR [NZ] base in Auckland. 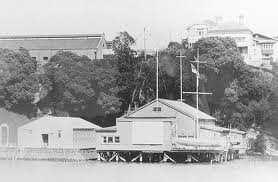 The location of the Auckland Volunteer Reserve Division HMNZS Ngapona at St Mary’s Bay is due to the efforts of one man, Charles Palmer, the father of the Naval Volunteer Reserves in New Zealand. On 17 November 1924 Commander Middleton was appointed as Commander of the RNVR [NZ] base in Auckland. In February 1925 additional officers were appointed and recruitment begun for ratings using the Royal New Zealand Yacht Squadron headquarters. Many of the first recruits were members of the RNZYS or other Auckland boating/sailing clubs.[1] Recruitment for the NZ Division of the Royal Navy based at the Naval Base at Devonport was a struggle contrasted with the rapid growth of the Auckland Reserve Division.[2]

In May 1925 the first parade for the Royal Navy Volunteer Reserve [New Zealand] was held in Shed 14 [the potato storage shed] on the Central Wharf [now the Captain Cook wharf]. The first official duty was to form part of the Honour Guard for the Untied States Navy Battle Squadron that was due to visit Auckland in August 1925. The Devonport Naval Base provided two cutters for boat drill. The sailing and pulling training was carried out from the Admiralty Steps in downtown Auckland while the general seamanship training was carried out in the wharf building.[3]

In 1926 the now gazetted Lieutenant-Commander Charles Palmer[4] secured the Navy League’s headquarters in Simich’s Building [what is now the Downtown carpark] as a base for the newly formed unit parades. Due to the size, the 120 men of the unit were split into two 60-men parades held on separate nights during the week.[5] This set up would continue until the new headquarters building was opened at St Mary’s Bay. Annual parades would be held over at the Devonport Naval Base.[6]

In November 1927 it was decided to form RNVR divisions in the other main centres. At this time the Auckland Division consisted of 36 officers and 175 ratings.[7] Acting Lieutenant Commander Palmer was Second in Command of the Auckland Division. In May 1927, he took a leave of absence and visited Britain. He volunteered at his own expense to visit the RNVR headquarters and training establishments to investigate methods of training and administration of volunteer reserves. This offer was accepted by the Navy Board.

When he returned to New Zealand he produced a report for the Navy Board which advocated a training establishment on the waterfront.[8] He was also horrified to discover that a new inappropriate headquarters located at the Engineering Shop of A & Price Ltd was being considered. Palmer insisted that he be appointed as second-in-command of the Auckland Division and a new headquarter be built over the sea. The Commodore of the NZ Division of the Royal Navy advised Palmer that if he could obtain a supplementary grant from the government for a new building, he would authorise the construction and manning of a headquarters. Palmer would also be made second in command if he could bring this off.[9]

The Auckland Harbour Board offered what was an ideal site for the new headquarters at St Mary’s Bay. Palmer with assistance from the local Navy League hosted Prime Minister J.G. Coates and the Defence Minister at the proposed site when they visited Auckland. Palmer’s persistence and persuasion paid off and he was given a grant of £4,000 to build the headquarters.[10] The building was based on plans from the RNVR Division Headquarters at Hove which Palmer had inspected during his visit to Britain. He conferred with the Public Works Department who would carry out the construction and in this he was assisted by regular officers and senior rates from the NZ Division at Devonport.[11] Construction was begun in 1928 below the ‘Jacob’s Ladder’ and completed in 1929. During this time the name of the Division was changed from RNR [D] to the Auckland Division of the RNVR [NZ Division].

On Saturday 1 June 1929 the new headquarters was opened by the Governor-General Sir Charles Fergusson and the men of the Auckland Division RNVR [NZ Division] marched in and paraded.  By the 1930’s the base was a centre of a thriving social and sporting life for the reservists and home to varied training activities. It also served as an HQ in 1932 when reservists were sued to police the riots in Auckland.[12]

The immediate priority after the Second World War was the need to refit the buildings from their wartime use a classes for naval training. In 1947 launches termed Harbour Defence Motor Launches (HDML) were supplied by the War Asset Realisation Board for training purposes. [13] The government of the day saw training and strategic possibilities of these vessels in use by the Naval Reserve. The RNZN requested that the HDML be armed with two .50cal machineguns, one 20mm Oerlikon, and depth charges. The HDML was commissioned as the Ngapona in October 1950. The vessels were duly equipped but the armament was removed in 1955.[14] This can cause some confusion between the shore establishment and the HDML sharing the same name. It was not until 1967 that the vessel in service was re-named HMNZS Tanmure.[15]

In 1948 there was a major policy change instigated by the Government. The RNZNVR was created with four divisions based in Auckland, Wellington, Christchurch, and Dunedin. With the passing of the Military Training Act in 1949, they took responsibility for men who chose to do their CMT in the Navy. 1992 men went through this process until 1957.[16]

Origin of the name:

In 1951 the four divisions were given the following names:

In November 1950, a plaque was unveiled to commemorate the 44 RNVR [NZD] men who lost their lives during the Second World War.[19] This was a time of growth and development as men passed through for their CMT and the base was operating with satisfactory numbers of volunteers. Due to the influx of CMT personnel who chose to serve with the Navy it became urgent to extend the buildings to cope with the training requirements.  There was speculation that the base would be moved in 1950 but rather training was spread over three days per week to accommodate the personnel.[20]

In October 1951 a further £6,000 was authorised by the Government to extend facilities fro training including engineering and electrical workshops. In October 1952 a prefab building arrived from the UK for construction at the base and opened in 1953. This new building consisted of engineering, electrical workshops, sickbay, seamanship, TAS, supply & secretariat classrooms and a theatre. The main building was used for communications and gunnery training.[21]  In July 1954 personnel were issued with cap tallies with the legend HMNZS Ngapona.[22] By 1958 the expansion of Auckland city and development of the North Shore would have a direct impact on the base. Images of the base before the roadworks show the sea reaching to the dock located in front of the main building. This is where the northern motorway is located now.

The old wardroom and gun battery were lost the construction. One consequence was that the whole building had to be moved back several feet. The technical training building was moved behind the HQ building and connected by a covered walkway. In a deal between the RNZNVR and the MOW carparks and a parade ground were created during the building of the motorway for the base. In addition volunteers in working bees prepared carparks and access road to the base from bluff.[23]

By 1960 the buildings were refurbished as part of the move with the motorway. In 1960 a new flagpole was raised on the grass plot. At this time there was lots of effort put in by the personnel to return Ngapona to a Naval Establishment.[24] In April 1961, during the visit of Governor General Viscount Cobham, after the boisterous dinner in the mess, officers decided to fire a 21 gun salute in the early morning at 0245 hours. This naturally upset the civilian neighbours in the bluff above the base and they complained most vigorously.[25]

In 1963 a new pontoon wharf was towed over to St Mary’s Bay from the Birkenhead Wharf for use by the NR so that personnel could work on the ML without having to go to Philomel. It lasted into the 1980s when it was disposed of.[26] In 1966, the bridge was in the process of being extended. A suggestion was made that Ngapona move. Over the next 24 years the suggestion was made but the building and operation left where it was. In 1967, an effort in voluntary work by the reservists upgraded the building including a new canteen, new sick bay and upgrading of the pontoon. Also a large amount of obsolete equipment was removed and disposed of.[27]

This was a hard time for the RNZNVR as numbers fell off but the base was kept in operation despite changes in Governments and major political policy change in the 1980s when New Zealand introduced anti-nuclear legislation. The propeller mounted in front of the building is from the WW2 minesweeper HMNZS Hinau recovered by reservists in 1987 to be used as a memorial to the minesweeper and men of the reserve.[28] Into the 1990s Ngapona was still used but the RNZN was aware that it had a limited time to relocate the Auckland Division. On October 8-9 2005 Ngapona celebrated its 80th anniversary in an event indented to promote the existence of the Naval Reserve in Auckland and ultimately assist in Volunteer reserve recruiting.[29] In 2007 the RNZN ordered that the St Mary’s Bay site be closed down and Ngapona was relocated to HMNZS Philomel to a building named for Charles Palmer.