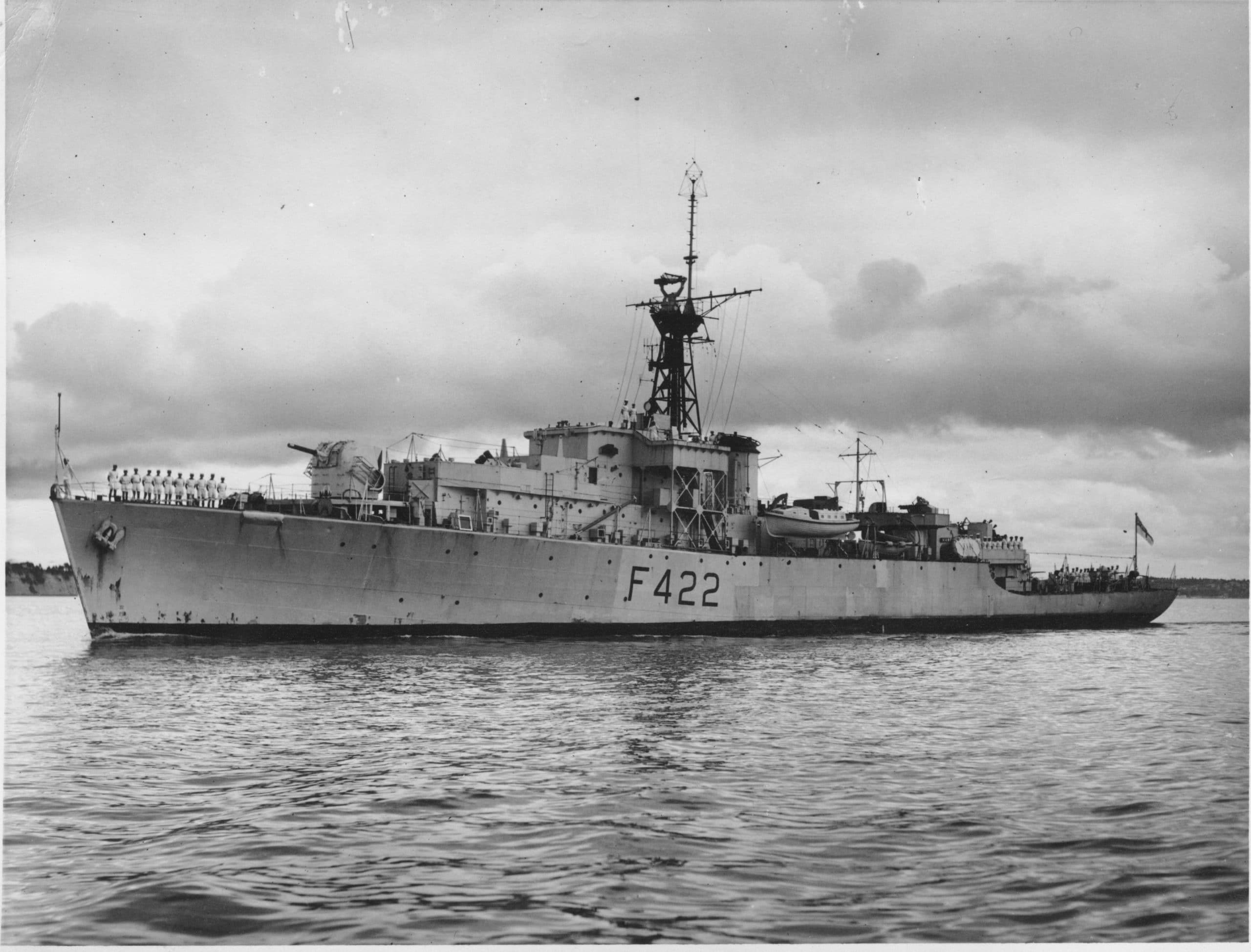 HMNZS Hawea was the fourth of six Loch-class frigates formerly known as HMS Loch Eck that was sold to the New Zealand government. She was commissioned for service with the RNZN on 1 October 1948. Hawea was the first RNZN vessel to fire shots in anger during the Korean War.

This badge was designed for HMNZS Hawea in 1948. It features a uniquely Maori weapon the kotiate reflecting the history of Lake Hawea where tribes had successively overcome and driven out their predecessors.  The badge was approved in 1951. The name and badge were also given to a Lake-class patrol craft that entered service in 1975, and the Lake-class Inshore Patrol Vessel that entered service with the RNZN in 2009.  In 1948 the RNZN chose the name Moana but this was changed to Hawea.

This was a simple and rugged wartime design for an anti-submarine escort ship for operations with convoys. The design reflected the developments in anti-submarine warfare up to 1944. The class was named after Scottish lochs. They were assigned to the RN Home Fleet and were part of the escort groups taking convoys to Murmansk. After completion in late 1944 HMS Loch Eck entered service with the RN. In February 1945 she took part in the sinking of two U-boats off the Shetland Islands. After the end of the war in Europe, Loch Eck was transferred to the Far East and took the Japanese surrender at Bali in August 1945. After the end of the war she was paid off into reserve.

In 1947, Rear-Admiral G.W.G Simpson advocated a six-frigate concept to protect New Zealand from the potential submarine threat. Therefore the government in 1948 purchased six Loch-class frigates from the Royal Navy at a cost of £1,500,000. This class of vessel was a wartime design that was to be used for anti-submarine warfare, escort, and convoy duties. They proved their worth in latter period of the Second World War. These ships had an excellent cruising range and good sea keeping qualities and in hindsight proved a bargain for the RNZN. HMNZS Hawea was the fourth of six Loch-class frigates formerly known as HMS Loch Eck that was sold to the New Zealand government. She was commissioned for service with the RNZN on 1 October 1948.

Lock Eck when commissioned as HMNZS Hawea was sent for a refit at the RN Dockyard at Devonport UK. She was partly modernised, some armament modified and prepared for service with the RNZN according to its requirements. Initially, the RNZN personnel who brought back HMNZS Arabis & Arbutus were used to man Hawea but there were also RN personnel who were recruited for RNZN service. Along with HMNZS Taupo, Pukaki, and Kaniere, Hawea formed the 11th Frigate Squadron in August 1948 with the senior officer in Taupo.

By 1 October, the first four frigates had been formally handed over and after a workup left Portland on 15 October 1948 for New Zealand via Suez and Fremantle. All four arrived in Auckland on 5 January 1949.  When the ships arrived in Auckland, the New Zealand Squadron was reactivated and the Senior Officer was in the cruiser HMNZS Bellona.

In February 1949, she undertook a ‘showing the flag’ cruise in the Pacific. She visited Western Samoa and then returned to New Zealand. She then undertook a voyage around New Zealand ports in company with Pukaki & Kaniere. Again in May she undertook another Pacific voyage visiting the Cook Islands and American Samoa. Joined by Taupo & Pukaki she visited Fiji in June-July 1949 then returned to Western Samoa. In August 1949 she took stores to Raoul Island. On 16 September 1949 she was paid off and was fully modernised and was recommissioned 6 March 1950.

IN 1950 the RNZN made arrangements with the Admiralty to conduct a six-month exchange of frigates. Taupo & Hawea were selected to operate with the Mediterranean Fleet. Their place was taken by HMS St Austell Bay & Veryan Bay, both Bay-class frigates. Hawea departed in company with Taupo on 3 April 1950 arriving in the Mediterranean in May 1950. While there both ships took part in fleet exercises and patrol duties. She operated from Malta and visited Greece, Libya, Cyprus, and Italy. On 30 September 1950 Hawea’s whaler won the Hamilton Cup, a first as she was the first frigate to have won the cup in the event’s history. In October 1950 the exchange period came to an end and Hawea began the return to New Zealand arriving via Singapore on 26 November 1950.

In February 1951 she took passage to Hobart and exercised with RAN vessels and Bellona & Taupo. With the outbreak of the Korean War in June 1950, the New Zealand government committed two of the Loch-class frigates to the UN naval forces to remain on station off Korea. Staying in Australia, Hawea began the voyage north to the war zone. On 15 April 1951 she conducted an anti-piracy patrol in the vicinity of British North Borneo. Arriving in Hong Kong on 19 April, the ship was brought to full war complement and provisioned with stores and ammunition. At the end of April she was in Japan and took part in daily anti-submarine exercises with HMNZS Tutira & Rotoiti.

On 5 May 1951 she arrived at the Japanese port of Sasebo, which was the operating base for the RNZN frigates. She was now on station in a theatre of war. From May 1951 to February 1952 she undertook patrols of the west coast of Korea along side RN, USN, RCN and RAN vessels. Hawea was the first RNZN vessel to fire shots in anger during the Korean War. In September 1951 she was deployed up the Han River to provide fire support for land forces. She lost a motorboat while navigating the many swift tidal channels of the river to reach her bombardment position. She arrived back in Auckland on 8 March 1952. She went into a refit and was recommissioned 8 July 1952. In August she went to Australia to undertake exercises with the RAN at Jervis Bay. She again took passage from Australia for a second deployment off Korea. She arrived at Sasebo on 1 October 1952 and returned to patrolling the west coast of Korea. This was mundane duty, but vital in keeping the seas secure around the Korean peninsula and assist the land operations. She also provided naval gunfire support to operations against North Korea.

When the truce was signed ending the war in July 1953, Hawea was still on patrol. She was deployed to evacuate South Korean partisans from outlying islands above the 38th parallel which was proposed to be the armistice line for the UN and the North Korean/Chinese forces. Both Kaniere and Hawea were involved in heavy bombardments of enemy guns positions, bunkers and defensive positions right up to the ceasefire. She took passage back to Auckland and arrived on 29 August 1953. She went into refit until January 1954. After a workup and exercises in Australia, she undertook under Pacific cruise. During this cruise she encountered the HM Queen Elizabeth II aboard SS Gothic. The ship’s company manned the ship’s side and gave three cheers. She returned to Auckland on 23 March 1954.

Her next deployment was in New Zealand waters. Her home port was Dunedin so she was sent there. Firstly, she took out a gunnery class from HMNZS Tamaki for three days training. She then went to Dunedin and took aboard 21 RNZNVR ratings from HMNZS Toroa for training. This period lasted approximately a month. On return to Dunedin, she embarked 40 sea cadets and students. She then took on Sea Scouts for a day sail and another 20 sea cadets. She returned to Auckland in July 1954.

She then took part in Exercise KOWHAI from 25-30 July 1954 then took passage to Fiji. She returned to Auckland on 18 August.  She then went down to Wellington and took on thirteen RNZNVR ratings from HMNZS Olphert and the CNS and went to the Marlborough Sounds in company with HMNZS Tui. This was the beginning of a three year period as a training frigate. She then undertook a visit of South Island ports with CNS on board until she reached Bluff where he disembarked. In November 1954 she took on two officers and twenty RNZNVR ratings from HMNZS Pegasus for training. She also took part in exercises with HMNZS Black Prince. Also in November she visited the Chatham Islands for two days then returned to Auckland via Lyttleton. In December, she embarked sixteen RNZNVR ratings from HMNZS Ngapona and took them for training in the Bay of Islands.

In January 1955 she departed Auckland and visited Tauranga, Napier and Dunedin before crossing the Tasman to Hobart. In February she undertook exercises and training with the RAN in Jervis Bay she returned to Auckland on 11 March 1955 and went into refit. On 2 August 1955 she departed for Fiji and remained in the area until returning to Auckland on 28 August. In October she returned to Australia and Jervis Bay, she returned home to Auckland via Nelson. On 22 October, three ratings were slightly injured when a shell fired from the 40mm Bofors prematurely detonated during a demonstration shoot off Nelson. In November she departed Auckland and once again visited Fiji arriving back on 22 November 1955.

Her first duty in 1956 was to be present at the Waitangi Day celebrations. In May she took stores and personnel to Raoul Island. In July she departed for Fiji for exercises. From 14 to 21 July she undertook daily exercises with the RN submarine HMS Telemachus. When she left Fiji she embarked 21 ratings from HMS Viti for training. She arrived back in Auckland on 10 August.  In December she took passage to Lyttleton in company with Pukaki. While there she sailed in company with Pukaki and HMY Britannia. She detached and visited the Chatham Islands then went to Raoul Island and returned to New Zealand. On the way Scott Island was visited, an extremely rare event for RNZN vessels. In December 1956, she in company with Pukaki escorted HMNZS Endeavour I to the edge of the pack ice during its first voyage south. On this trip Sir Edmund Hilary was aboard. He was participating in the crossing of Antarctica. There were also supplies aboard to begin construction of the New Zealand base on Antarctica, later named Scott Base.

She arrived in Auckland on 7 January 1957. On 17 February she was placed in reserve. From March 1957 to November 1965 she remained in reserve at Auckland. She as decommissioned from RNZN service and sold to the Hong Kong Rolling Mills for scrapping in September 1965. She was taken under tow along with Pukaki by the tug Atlas which left Auckland on 15 November 1965, arriving in Hong Kong in Janaury 1966. 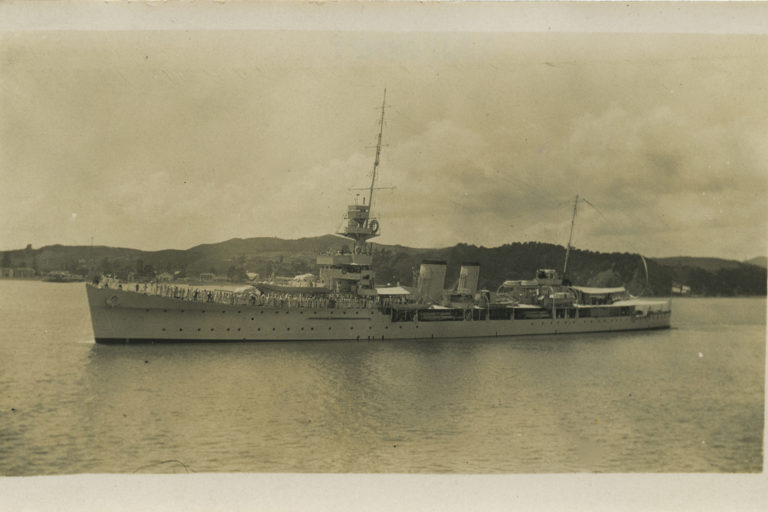 HMS Dunedin was a Cruiser that served as flagship. 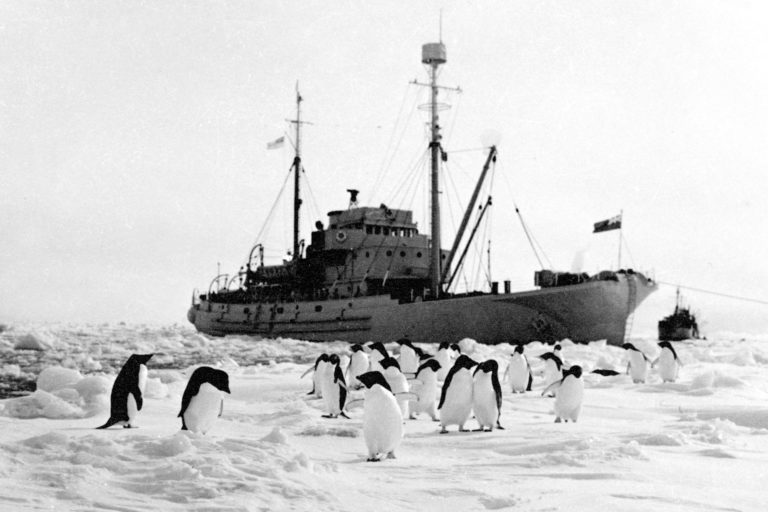 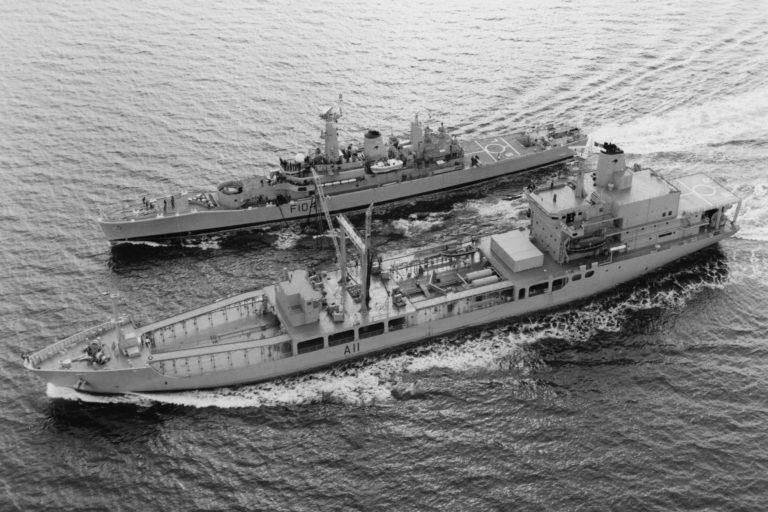 As the Royal New Zealand Navy’s (RNZN) purpose-built fleet replenishment tanker, HMNZS Endeavour carried supplies and fuel for RNZN, Commonwealth and Allied surface units. She could resupply ships at sea, or in overseas ports from the 7,381 tons (7,500 tonnes) of fuel in her eight tanks, or the supplies held in the four containers on… 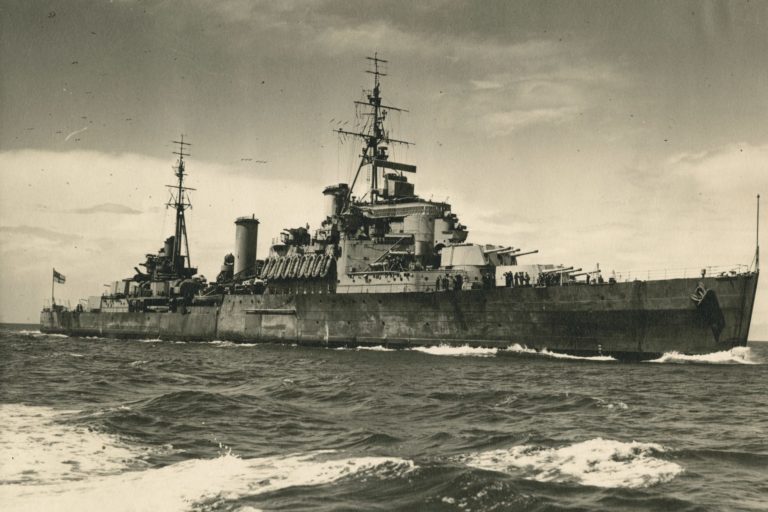 HMNZS Gambia saw service in WW2 in the Pacific. 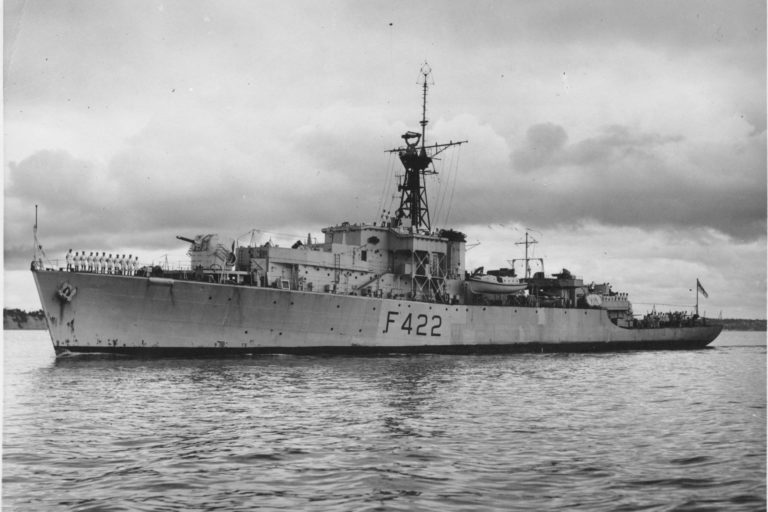 HMNZS Hawea was the fourth of six Loch-class frigates formerly known as HMS Loch Eck that was sold to the New Zealand government. She was commissioned for service with the RNZN on 1 October 1948. Hawea was the first RNZN vessel to fire shots in anger during the Korean War. Ship Details: Type: Loch-class anti-submarine frigate… 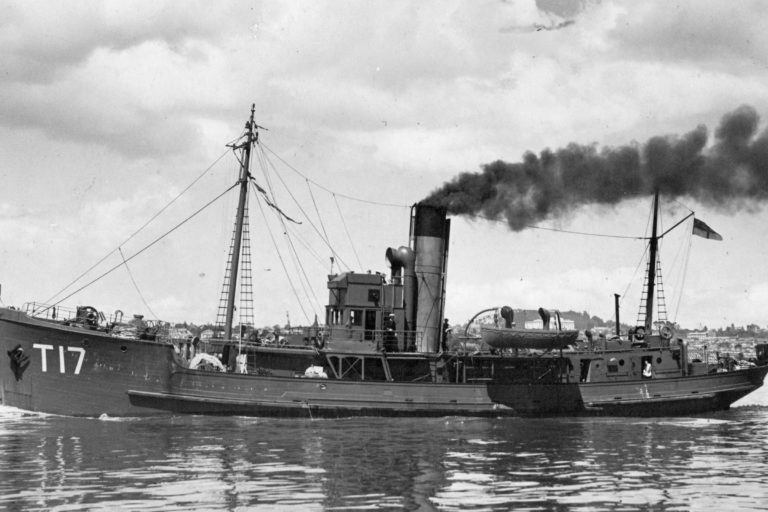 She was a Castle-class minesweeper built in Auckland WW2.