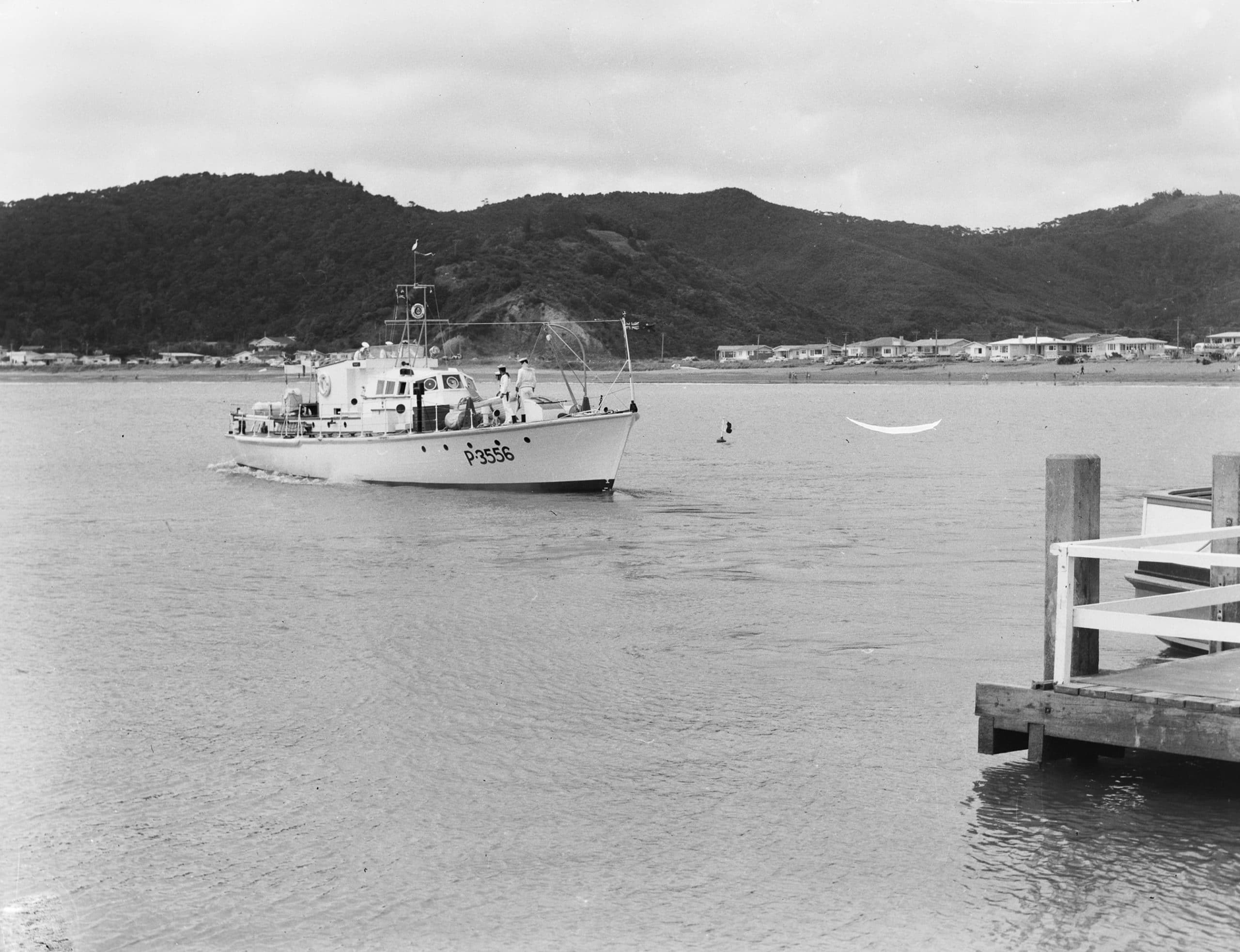 Ship details as above

Colour Schemes – in wartime service the HDMLs had a mixture of dark and light grey overall. Post 1945 this was changed to a light grey. The Survey Motor Launches [SML] were given an all white scheme as was standard for survey vessels in this period as per the images above. 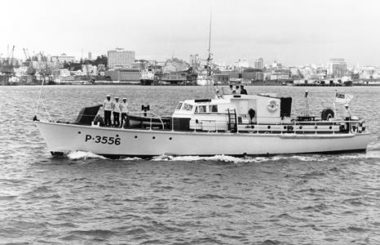 This type of vessel was designed in 1939 by the Admiralty for harbour patrol and anti-submarine duties. It was designed for construction in civilian boatbuilding companies. Between 1940 and 1945 over 500 were built. They were considered very robust and seaworthy craft with good sea-keeping qualities. In January 1942 the Admiralty agreed to allocate HDMLs to New Zealand and ordered 24 from the United States under the Lead-Lease arrangements. Twelve vessels were ordered in May 1942 from the United States to be built in boatyards on the West Coast and East Coast.  The final vessel varied between each boatyard as to fit out and appearance. The USN supervised the construction and then took charge of the finished HDML for allocation to the Allied navy. Both Q1187 & Q1188 were shipped as deck cargo from Vancouver aboard SS Kootenay Park and arrived at Wellington on 30 April 1943. There they were unloaded by floating crane and underwent full commissioning trials.

It was intended that they would be used for anti-submarine patrols in the port approaches. They would replace the NAPS launches. Q1187 after commissioning joined the 124th Motor Launch Flotilla in Auckland. Q1188 joined the 125th Motor Launch Flotilla based in Wellington. They then carried out routine patrols in their respective areas through to 1945. As the war came to an end in 1945 the launches were concentrated at Auckland to pay off. Q1187 arrived on 30 June 1945 followed by Q1188 on 11 July. After paying off they were laid up at Pine Island. In July 1946 ownership passed to the Marine Department who was selling off war surplus. Once the Lend-Lease agreements were concluded the government put them up for sale. However, during the sale process the government realised the value and in February 1947 Q1188 was withdrawn from sale.

In 1949 the RNZN purchased the frigate Lachlan for use as the first survey vessel in RNZN commission. It was decided that two smaller vessels would be needed to assist her in the survey task which HDMLs would be suitable. Q1188 had been cannibalised for parts to keep the other HDMLs that were in service so she had to be rebuilt. This was completed in February 1950 and she was commissioned as SML 1188 and was sent to Wellington in March. After arriving in Wellington, she began a survey of Cook Strait. In April she was given the pennant number P3556.  A second launch was required for survey duty so that Auckland Coastguard’s Cutter No. 1, formerly Q1187 reverted to the RNZN on 29 May 1950 and was given the pennant number P3566 in October 1950. She was converted to SML in March 1951 and commissioned as a survey vessel on 21 March 1951. In April she proceeded to Wellington to carry out surveys of the Cook Strait. From then until 1979 both vessels carried out surveys right across the New Zealand coastline mostly by themselves or as a pair. They would also work with HMNZS Lachlan & Monowai.

In 1948 the Admiralty reclassed HDMLs as Seaward Defence Motor Launches [SDMLs]. The RNZN changed the classification in August 1949. By March 1950 orders were issued to change the pennant numbers. Q1187 was assigned the number P3566 and Q1188 assigned P3556. This caused some confusion in signalling and the keeping of records. There is still today some uncertainty about which vessel is being referred to due to errors in recording the correct number. To try ad solve the problem for the signallers from May 1951 P3556 had [A] added and P3566 [B]. These were added to the hulls in 1953. On 28 October 1954 P3556A chased a stolen yacht off Whangaparaoa. 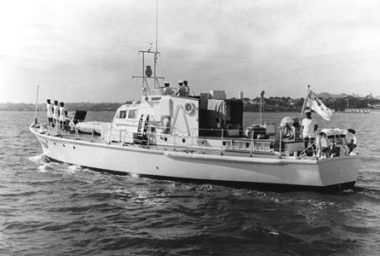 The next change was to assign names to the SDMLs that were in service with the RNZN. Those SDMLs that were assigned to fisheries protection were assigned Maori names for fish while other vessels were given Maori names for sea-birds. On 21 July 1955 P3556A was renamed Philomel, P3566B was renamed Maori from the shore establishments. As per NO 14/56 of 19 January 1956 Philomel was renamed Takapu [Gannet] from October 1955. Maori was renamed Tarapunga [Black-backed Gull] also from October 1955. They would serve as survey vessels under these names until they were released from survey duty in 1979.

Other SDMLs were used as survey vessels. Between 1955 and 1957 P3562 [HMNZS Olphert then Parore] surveyed Ketu Bay and the outer Pelorus Sound. In February 1975 HMNZS Paea [P3552, then Philomel then Paea] assisted Takapu & Tarapunga after Lachlan was withdrawn from service. This deployment carried on through to March 1977 when the arrival of the new survey ship HMNZS Monowai was approaching. For this duty, Paea was repainted white after the first survey season. In late 1977 she was transferred back to RNZNVR duties and repainted back to the standard scheme. In March-April 1978 Paea surveyed the Tory Channel

At the end of the 1978-1979 survey season Tarapunga was withdrawn from service and paid off in June 1979.  In November 1979 Takapu arrived at Auckland for paying off and was decommissioned in December. At this time the IPC vessels marked for survey duty were under construction at Whangarei and had been assigned the names Takapu & Tarapunga. Both SDMLs were repainted to the standard colour scheme and refitted for use by the RNZNVR. Takapu was renamed Kahawai II and was sent to HMNZS Toroa in August 1980. Tarapunga was renamed Mako II and sent to HMNZS Olphert in November 1980. In August 1982 Kahawai II left Otago and was dismantled for disposal. Mako II left Wellington in August 1983 for dismantling. Both vessels were sold by the RNZN in 1984 ending some 40 years of service with the RNZN which was well beyond their expected life in 1943.

Both ships were decommissioned in 2000 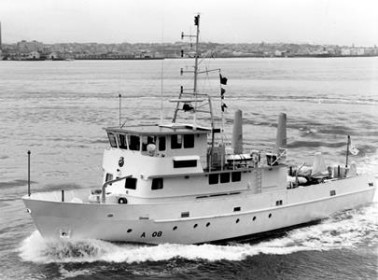 These two vessels were built to replace the SDMLs that carried the same name. They had the same hull design as Manawanui II built by WECO but the superstructure and appearance was designed for hydrographic duties. The four RNZNVR Inshore Patrol Craft that followed these two vessels were of the same design after these two vessels proved their worth in service with the RNZN. They took the names of the two SDMLs that had been returned to RNZNVR service and renamed. During their service history they operated with HMNZS Monowai & Resolution which were the RNZN’s hydrographic vessel. Tarapunga & Takapu could access parts of the coast and harbours that a larger vessel could not survey such as Monowai or Resolution. They could also be used for search and rescue missions, coastal fisheries patrols and sea training.  Considering their size these vessels had a high standard of living compared to other vessels. Force ventilated through with electric heaters. Commanding Officer, Senior Rates and Junior Rates had their own messes and bathrooms. A central galley provided the meals to the ship’s company.

Tarapunga arrived for service with the RNZN on 30 March 1980 from Whangarei. Takapu arrived on 2 July 1980. In August she returned to Whangarei for adjustments. They could work together on surveys or alone. They could also work in company with either Monowai or Resolution. The first major task was carried out from 1981 to 1984 when they carried out a survey of Foveaux Strait and Bluff Harbour. This was updating a survey last carried out by HMNZS Lachlan as reported by the Ministry of Defence in 1984. 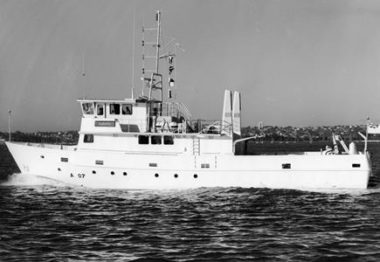 Following her annual refit Monowai participated with other RNZN ships in the annual SQUADEX exercise in January 1984 and then carried out a resurvey of Bluff Harbour in conjunction with the inshore survey craft HMNZS Tarapunga and Takapu in preparation for the publication of a new edition of the chart of the Bluff Harbour. In late February Monowai returned to Wellington to resume the re-survey of Cook Strait.[2]

Both ships were also deployed for exercises with the inshore patrol craft. In November 1985 both ships were returned to Whanganui for engineroom modification to cut down on engine noise. On 4 November 1980 Tarapunga was holed in two places when she struck a spar in the remains of the sailing ship Northumberland[3] in Bay View Beach Westshore, Napier. She made to the Napier port and then returned to Auckland escorted by Takapu.