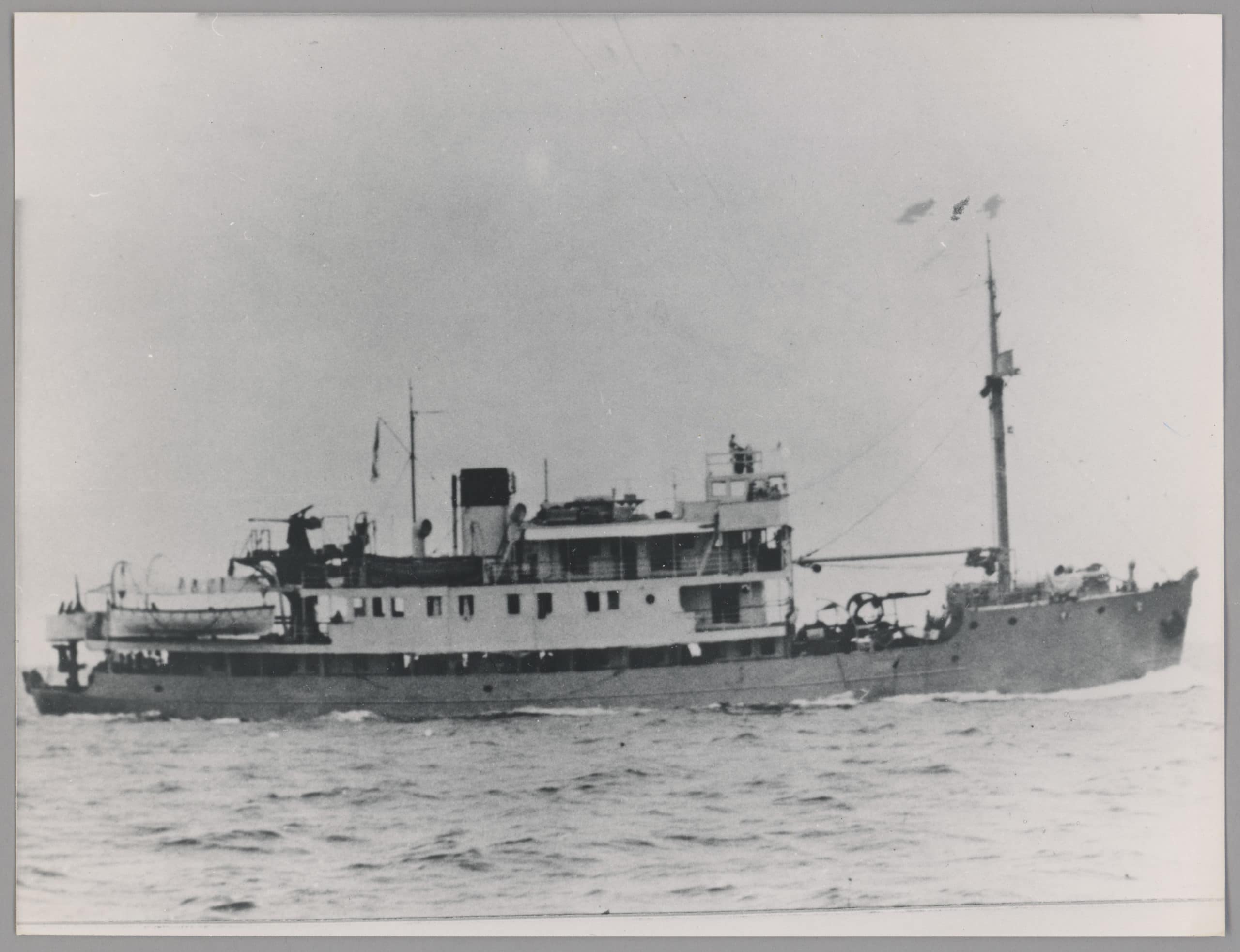 RCS (Royal Colonial Ship) Viti was built and launched at Hong Kong in late 1939 and was fitted out as a ‘minor combatant ship.  HMFS Viti spent her war service in Fijian waters and would return annually to New Zealand for refitting. On her first refit visit in December 1941, she was equipped with ASDIC.

Pre-war use: passenger/cargo and supply ship

RCS (Royal Colonial Ship) Viti was built and launched at Hong Kong in late 1939 and was fitted out as a ‘minor combatant ship. However she was not fitted with any weapons and was used for administrative duties in the Western Pacific including Fiji. Viti first arrived in Auckland in January 1941. She was to be equipped to train Fiji’s volunteer naval forces in minesweeping. This was a common practice during the war. Most Volunteer Reserve personnel were given training in minesweeping and posted to minesweepers or other small vessels rather than major warships.

To formalise the command structure, Viti was commissioned on 17 April 1941 as His Majesty’s Fijian Ship (HMFS) Viti under Fijian control. In November 1941 the New Zealand Government advised the Secretary of State for Colonial Affairs that New Zealand could not be responsible for the defence of Fiji unless the Viti was placed under the control of the New Zealand Naval Board for ‘uninterrupted employment in Fijian waters.’ In December 1941 she was placed under Admiralty control and it appears at this time she changed her prefix to HMS. From 16 December the New Zealand Naval Board was given operational control of the vessel. HMFS/HMS Viti spent her war service in Fijian waters and would return annually to New Zealand for refitting. On her first refit visit in December 1941, she was equipped with ASDIC. All refits were undertaken during the New Zealand winter at Lyttleton between 1943 and 1945.

She was tasked with carrying out patrol, escort and minesweeping work. With the American entry into the Second World War there were changes to the defence responsibilities in the Pacific. From late 1942, the American Navy took over the defence of Fiji. Fiji was a target of the Japanese forces in early 1942 until the tactical draw at the Battle of the Coral Sea in May 1942 followed by the decisive American victory at Midway in June 1942. Operation control of Viti was passed to COMSOPAC. For five months in 1942 she was in constant operation with aircraft of the RNZAF maintaining anti-submarine patrols and ‘close anti-submarine escort for the increasing number of troop transports and supply ships arriving and sailing from Suva. This monotonous round of duty was scarcely relieved by infrequent and unverified reports of submarines.’ In late 1943 she was escorting vessels to the Solomons and Tarawa Atoll where she lost her ASDIC dome in early 1944.

In the 1944 refit she was partly disarmed, had the minesweeping gear removed and converted back to a supply vessel for the Western Pacific under the control of the High Commissioner Western Pacific (HCWP) based at Suva. She served with the Hawera, Kapuni and the ex-USN Awahou which had been approved for service with the HCWP by the War Cabinet of the New Zealand Government. Until her decommissioning in November 1945, she carried supplies around the Western Pacific for the HCWP and well as passengers and troops. In September 1945 she towed the broken down Hawera from Espiritu Santo to Suva for repairs which was a trip of 700 miles (1127km). She also escorted the RNZN HDML 1184 from Auckland to Suva in November 1944 and after the decommissioning ceremony on 7 November 1945, her last official duty was to escort the HDML 1348 from Suva to Auckland arriving on 18 November 1945. At this time she ended her naval service and returned to the ownership of the Fiji government. She undertook several passenger and cargo voyages between Auckland and the Pacific Islands but put up for sale in late 1946. In 1948 she was sold to the Tasman Steam Ship Co. in Auckland and was to be used for the coastal and trans-Tasman trade. She was laid up in 1961 and then sold again.

In 1955 one of the RNZN’s SDMLs P3555 was made available to the Fiji Royal Naval Volunteer Reserve (FRNVR) and was renamed HMFS Viti until 1959 when the Reserve went into recess. During her passage to and from Fiji she was accompanied by one of the Loch-class frigates.