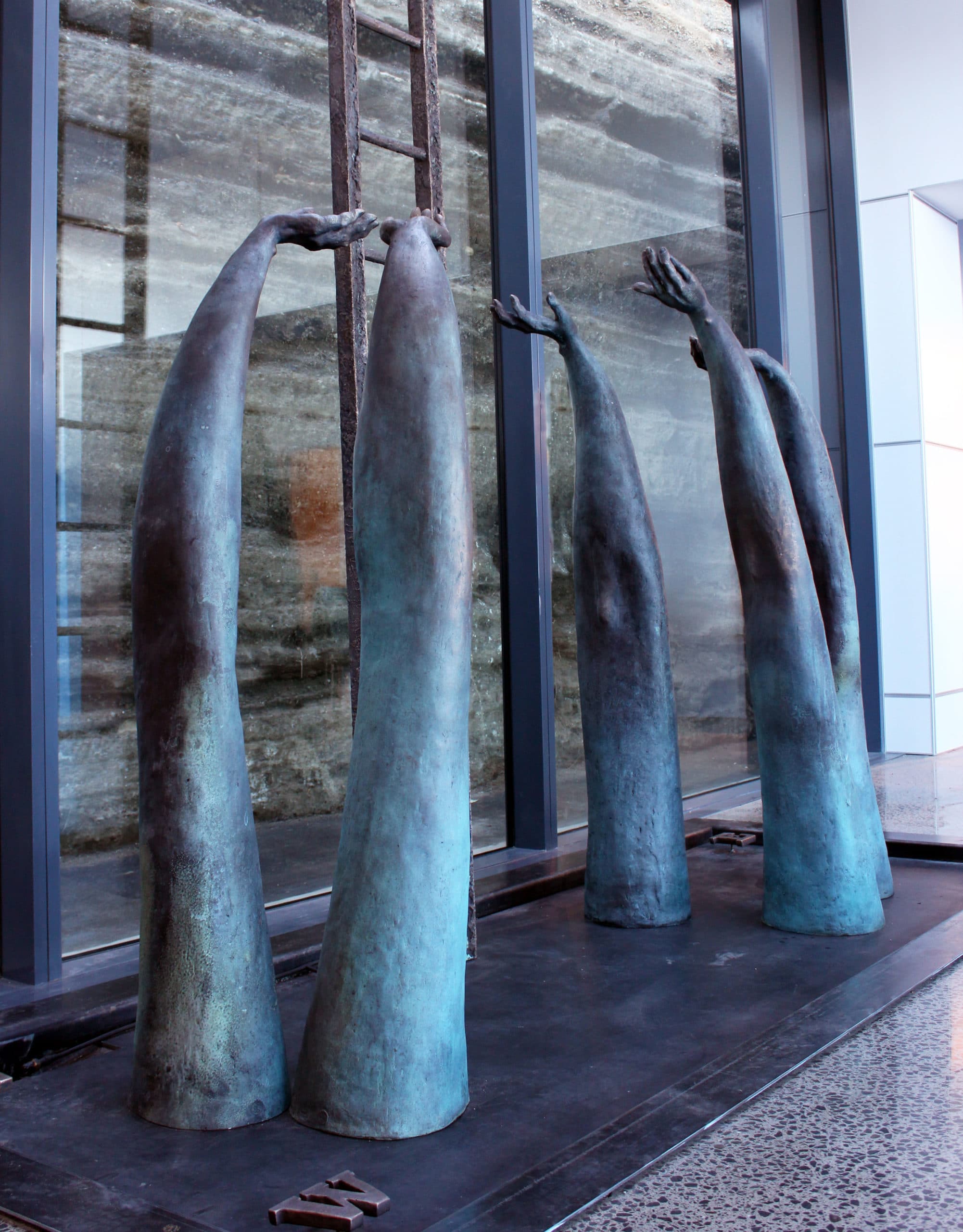 As Above, So Below

The story behind the Sculpture

Helen Pollock’s sculpture – As Above So Below, honours and commemorates the struggle and sacrifice of the New Zealanders who served at sea during World War One.

The intention is to evoke the nobility of their endeavours, their commitment and courage – as well as, at times, the appalling situations they had to endure.

As Above, So Below is an ancient phrase used to explain how the world works.

Everything, no matter how big or small, is interconnected. Whatever happens on any level, emotional, physical or spiritual, affects everything else.

In this context it references the camaraderie and the interdependence of sailors at sea, and elements around them.

The sculpture is anchored by its central feature, a Jacobs Ladder, echoing the staircase to heaven that the biblical patriarch Jacob dreams about.

It is a biblical and universal symbol of personal transformation. The ladder has the rusted and weathered appearance of a well worn ship’s ladder, one that must have had another ‘life’ prior to this.

The rungs have sagged with use, they area worn but enduring. By association, the ladder represents the journey through life, and beyond.

The ladder in As Above So Below therefore signifies the ‘bridge’ between heaven and our earthly realm.

On a ship, sailors climb the Jacob’s Ladder to reach the highest point of the upper mast. Climbing it requires daring and fortitude.

The ladder implies a challenging journey, it suggests aspiration, reaching upwards from the deck to the highest point of the vessel – and equally reaching downwards into the
depths of experience. As Above, So Below.

The ladder weeps silently. A trickle of tears runs down its face into the reflective pool. Collectively the tears create the pool which appears incalculably deep, a well of remembrance.

The ladder and the arms stretching upwards are reflected downwards into the pool seemingly infinite.

The arms represent the physical life force. They are larger than life they make an exultant and expressive gesture of nobility, courage and comradeship.

With their wrists exposed in an open gesture of offering, they are strong and powerful, committed to experiencing life courageously and whole-heartedly.

The five arms are representative of an untold number, but hold a specific significance representing sacrifice over the five years of the World War One.

The letters N, E, S and W, reference the points on a compass; markers that act as a guide and set the course of destiny.

As Above, So Below is lit by a shaft of light shining down from the hatch.

The light is visible from a distance, creating a unique and striking signal.

It acts as a searchlight as well as a beacon that serves as a symbol for the struggle and sacrifice of the New Zealanders who served at sea during World War One.