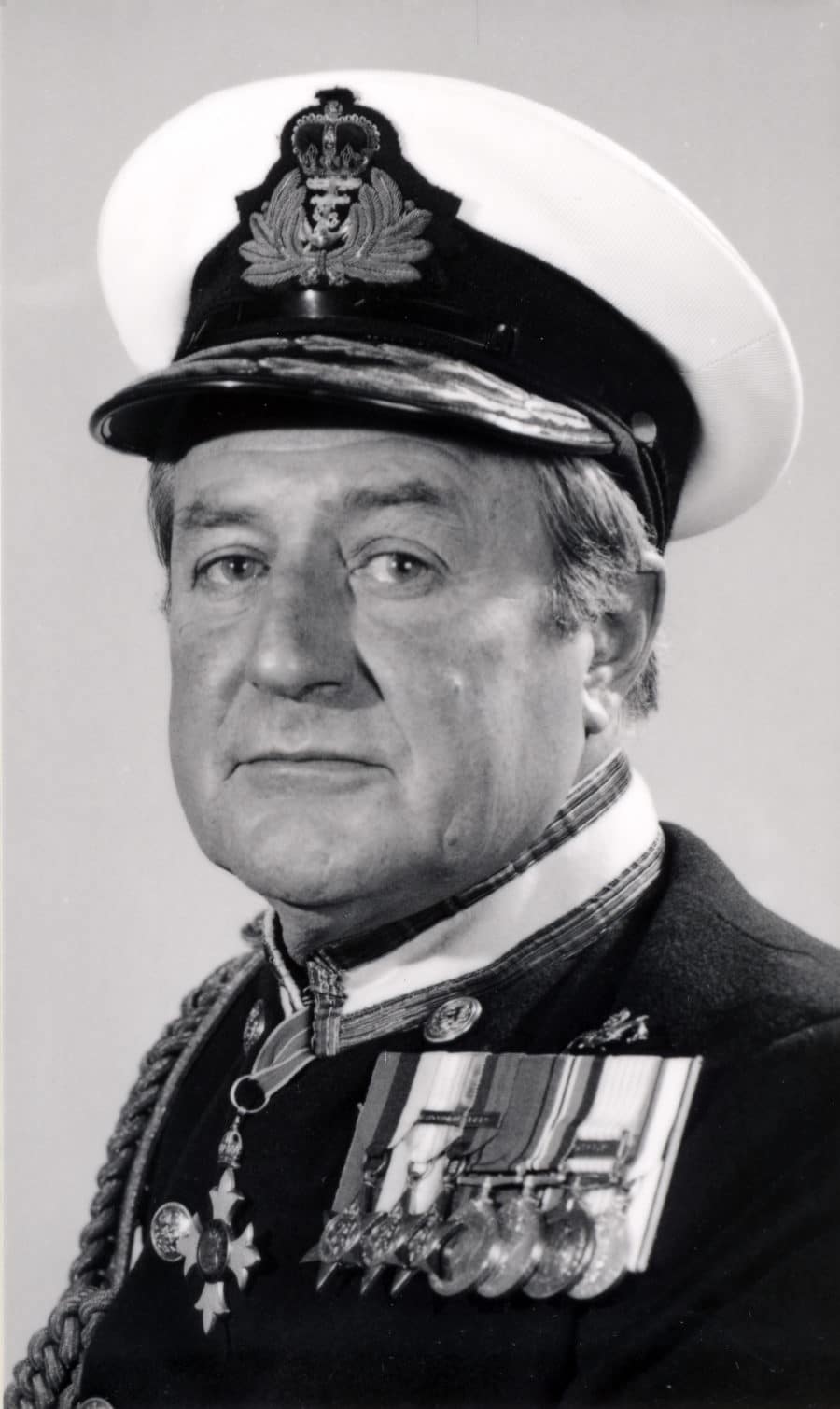 McKenzies’ naval career spanned the transition of the New Zealand Naval Forces from a small component of the empire’s Navy to the distinctive national navy that the RNZN became in the post-war years. As an ASW specialist he was well fitted for command of our (then) new Type 12 frigates; with his experience in Singapore and the UK he was well prepared for the development of the 1972 Defence White Paper.

John Foster McKenzie was born on 24 June 1923 in Waiuku,. He was educated at Timaru Boys High School and St. Andrews College in Christchurch. He joined the Royal Navy as a special entry cadet in 1941 aged 17.

Special Entry Cadets were established by the Royal Navy in 1914, to supplement the Dartmouth officer entry. Special Entry Cadets were open to the Dominions and between 1914 and end of the Second World War 23 cadets entered the Royal Navy from New Zealand, after selection by a board that included the Officer Commanding the New Zealand Squadron and often had the Governor-General as President. Following selection successful candidates would travel at their own expense to Britain. By the late 1930s training was undertaken in older warships moored at Portsmouth. But with the outbreak of the war Special Entry training moved to Dartmouth.

At that time a young man with professional ambition as a naval officer was more likely to see a full career in the RN, than in the New Zealand Naval Forces [which up until the Second World War had been in essence a cadre navy, focussed on ratings’ training]. John McKenzie recorded later that he really felt that he had served his ties with New Zealand and did not expect to have the chance to return for a very long time, if ever. He had joined to be an Engineer, however on arrival in Britain in 1942 he found that the Royal Navy had no record of this and entered him into the Executive Branch.

After training Midshipman McKenzie was sent to East Africa to join the cruiser HMS Devonshire[1]; to join her he took passage in the flagship, the battleship HMS Warspite, and learning among other things to make naval Kye. He then served in the cruiser HMS Hawkins and in 1943 joined HMS Quadrant[2] for his destroyer time. In Quadrant he took part in a U-boat hunt off Aden, and another off Zanzibar. He returned to Hawkins which in February 1944 was escorting a convoy including the troop ship Khedive Ismail. The Japanese submarine attacked and sank Khedive Ismail, with heavy loss of life including a large number of Wrens who were being sent to Ceylon.  Two escorting destroyers detected and sank the I-27.

In mid-1944 John underwent his Sub-Lieutenant’s Courses back in England. At the end of those, he volunteered for submarines, but with time to spare had three weeks at sea in Fairmile D MTBs in the Channel. Their primary role then was to use their high speed to create waves that would be directed over minefields where German ‘oyster’ mines [pressure mines] were laid; the boats would turn away at the last minute and the wave would roll ahead and cause the mines to detonate.  After submarine training he joined HMS Vitality, which was a training boat for convoy Escort Groups. After VE Day he helped receive some 120 surrendered U-boats, before being posted to the still-building T-class submarine, HMS Token. With the end of the war in the Pacific work on the submarine slowed, but in 1946 Token was operational and sailed to Canada to work with the Royal Canadian Navy. However in 1947 the British government announced heavy defence cuts and Token went into reserve. The RNZN, however, was keen to recruit personnel and New Zealanders in the RN were an obvious target. The famous submariner Captain ‘Shrimp’ Simpson had just been appointed as CNS of the RNZN; John talked with him and decided to transfer to the RNZN.

He joined the RNZN as a Lieutenant on 21 July 1947. As a young officer his sea-going ships in the RNZN included HMNZ Ships Arbutus, Hawea, Echuca and Bellona. He was First Lieutenant in Arbutus 4 October 1947 – 17 August 1948. He was then sent to Britain to commission the Loch-class frigate HMS Lock Eck as HMNZS Hawea 18 August 1948 – 31 January 1949. He then brought back Hawea to New Zealand 1 February 1949 – 20 September 1949. On 17 November 1949 he was posted to HMNZS Maori in London. He undertook the RN’s Long Torpedo and Anti-Submarine Course in Britain from November 1949 to August 1951, this included sea time in the destroyer HMS Crispin. Given contemporary pronouncements from the USSR about massive Russian submarine building programmes, the RNZN—with six Loch-class frigates—placed a high priority on ASW.

On 19 September 1951 he was posted to the cruiser HMNZS Bellona as the TASO through to 22 January 1952 and he took eight months leave. on 6 September 1952 he was posted back to Bellona and served in her until 21 March 1953. On 22 March 1953 he was appointed the Commanding Officer of the Bathurst-class corvette HMNZS Echuca this was for a very brief period. He was then promoted to Lieutenant Commander and on 19 August 1953 he joined HMNZS Pukaki as First Lieutenant; he joined the ship in Singapore and served in Korea on patrols just south of the truce line, from 25 November 1953 to mid-February 1954. On 19 August 1953 he was posted to the Loch-class frigate HMNZS Pukaki as First Lieutenant [Executive Officer]. From 21 September 1953 to 28 September 1954 Pukaki was deployed in Southeast Asia during the Malayan Emergency for anti-submarine & anti-raider convoy escort if a serious war broke out as part of the ANZAM agreement. He was posted off the frigate on 31 January 1954 and returned to Philomel.

He qualified for the UN (Korea) medal for this service. He was then posted to Fiji as Director of Naval Operations with No. 5 Squadron RNZAF (Sunderland flying boats) based at Lauthala Bay. His job was to teach the RNZAF contemporary ASW tactics and procedures with the then new NATO-standard allied signal books. One of his tasks in this period was as the Liaison Officer to the conventionally powered aircraft carrier USS Tarawa [CV-40] and destroyer USS O’Bannon [DD-450] during their high-profile visit to Wellington to commemorate the Battle of the Coral Sea.

Subsequently he took command of HMNZS Tui on 1 March 1955, then HMNZS Stawell on 27 June 1955 (both Tui & Stawell were dedicated to the training of Compulsory Naval Reserves—the Navy’s version of CMT). Posted to Navy Office as Director of Under Surface Warfare in March 1956, he had a key priority of establishing the requirements for the new generations of frigates, which were ordered the next year as HMNZ Ships Otago (F111) and Taranaki (F148). While in that post, he was appointed as an Honorary ADC to the Governor-General, July 1956 to June 1957. Promoted to Commander on 10 February 1959, he served for three years as the NZ Military Liaison Officer in Singapore. This was the final years of the Malayan Emergency, and Singapore was looking to independence, while tensions with Indonesia (and its Soviet-equipped armed forces) were growing. This period would have given him a clear understanding of the security issues across South East Asia at the time.

For any Executive-branch officer, a major sea command is always a goal; on 9 February 1962 he took command of HMNZS Otago, the new frigate’s second Commanding Officer. He took part in JET62, a major naval exercise in the South China Sea before Otago became the Royal Guard ship for HMY Britannia during the 1962/63 Royal Tour. Otago steamed 4,000 miles from Lautoka to Port Chalmers. He recalled his pride on being presented to Her Majesty the Queen, while Britannia was in Picton. However the Royal Yacht began to get underway while he was still on board; he then had a hasty motorboat trip to rejoin Otago even as his frigate was already weighing anchor to catch up with the rapidly departing Royal Yacht! Subsequently Otago sailed for Singapore via Pearl Harbor, where they undertook the RNZN’s first frigate workup with the USN. He then relinquished command to return to the Navy Office.

On 30 November 1964, he was promoted and appointed Captain of HMNZS Philomel, the RNZN’s shore establishment in Devonport, Auckland. On 1 January 1966, he was posted as Deputy Head of the New Zealand Defence Liaison Staff in London, and was subsequently appointed Head. This was an important posting as John had to oversee the tendering process for a new frigate (HMNZS Canterbury F421) and the loan of HMS Blackpool. His previous time in the RN and on his TAS course ensured he had a wide professional network. He the spent 1969 studying at the Imperial Defence College in London (today known as RCDS) and returned to New Zealand in December 1969 to be the first Assistant Chief of Defence Staff (Policy) under the new (joint) Defence Headquarters reorganisation. He was promoted to Commodore on 1 January 1970.

As ACDS (Pol) he had to lead the background work for the 1972 Defence White Paper. That paper was important because New Zealand, along with the other allies, had pulled out of the Vietnam War while the British, after ‘Confrontation’, had withdrawn from Southeast Asia, leaving the new framework of the Five Power Defence Arrangements as our principal defence link with Malaysia and Singapore. The 1972 White Paper had to address the underlying reasons for New Zealand’s professional peace-time armed forces and it was intended to explain New Zealand’s defence policy and structure to the wider population. In 1972, he was appointed Deputy Chief of Naval Staff then after a year moved to Auckland as the Commodore Auckland (COMAUCK—today that role is filled by the MCC at HQ JFNZ). As COMAUCK he oversaw the despatch of the frigates on the protests against French atmospheric nuclear weapons testing at Mururoa Atoll.

On 13 December 1975 [the anniversary of the Battle of the River Plate] he was promoted to Rear Admiral and became Chief of Naval Staff; he relieved Rear Admiral Edward Thorne. As CNS he had to grapple with significant personnel and pay issues, at a time when oil prices were rising and inflation was crippling the defence budget. He also initiated studies into what became the frigate replacement project; his immediate concern was to counter suggestions that all New Zealand needed was a Coastguard.

During 1976 he was in the chain of command for the Kin Nan incident, when the IPC HMNZS Taupo was attempting to stop the Taiwanese fishing vessel. it was CNS who alerted the Air Force, while briefing the CDS to consult the Government. Ultimately Skyhawk cannon fire stopped the fleeing vessel. “Perhaps the best thing to come out of it was in fact that it demonstrated our willingness to act over foreign fishing infringements,” he said in a subsequent interview. After two years in the post, the ‘standard’ posting in that role, he was relieved by Rear Admiral Neil Anderson and retired from the RNZN on 13 December 1977.

His naval career spanned the transition of the New Zealand Naval Forces from a small component of the empire’s Navy to the distinctive national navy that the RNZN became in the post-war years. As an ASW specialist he was well fitted for command of our (then) new Type 12 frigates; with his experience in Singapore and the UK he was well prepared for the development of the 1972 Defence White Paper. By the time he was promoted as CNS he had an extensive and well-rounded career, in which he had contributed extensively to the capabilities and standards of the RNZN. He died aged 89 in Auckland on 28 March 2013.

The OBE [Queen’s Birthday Honours, 1962] as a Commander

[1] It is believed these ships were deployed to the Indian Ocean and ‘the Eastern Fleet’.

[2] It is believed this ship was deployed to the Indian Ocean and ‘the Eastern Fleet’.