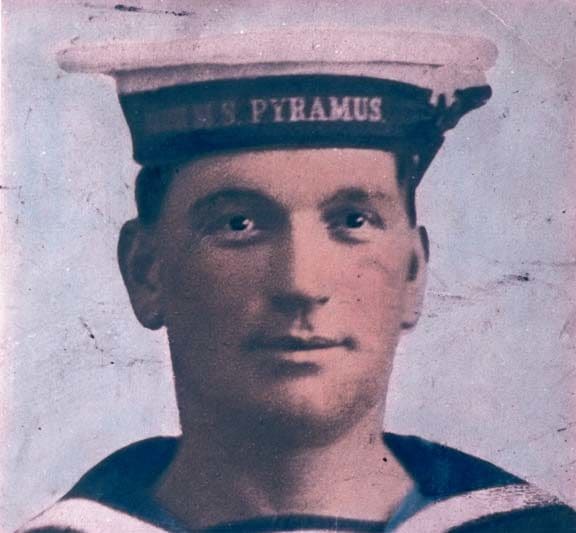 Able Seaman William Knowles was a member of the Royal Naval Reserve (New Zealand) serving on board the New Zealand cruiser HMS Philomel in 1915. He was one of the landing party from the ship which went ashore near Alexandretta (now Iskenderun) on 8 February and ran into a Turkish ambush. Seriously wounded in the fighting, he died early the next day and was buried at sea. He has the dubious distinction of being the first member of the New Zealand Naval Forces to be killed as a result of enemy action.

In 1902 William commenced an association with the Antarctic, when he joined the Morning which transported supplies to Scott’s first polar expedition.

William Edward Knowles was born in Liverpool in 1877 and later emigrated to New Zealand, settling in Lyttelton. He went to sea as a young man and joined the Royal Naval Reserve (New Zealand) after that force was established in 1904, completing periods of training in HM ShipsPioneer and Pyramus. In 1902 William commenced an association with the Antarctic, when he joined the Morning which transported supplies to Scott’s first polar expedition. This was continued in 1910 when he joined Scott’s ill-fated 1910-13 expedition as an Able Seaman on the Terra Nova. Also joining the Terra Nova for this expedition was another seaman from Lyttelton, Charles Williams. William was awarded the Polar Medal in bronze for this expedition. At the outbreak of war William was mobilised and joined HMS Philomel. Philomel formed part of the escort for the occupation of German Samoa in August 1914 and was then part of the escort for the ships carrying the main body of the New Zealand Expeditionary Force, as far as Fremantle. From there Philomel proceeded to the Middle East, via Singapore and after a refit in Malta in January 1915, was deployed to patrol the coasts of Syria and southern Turkey.

he general aim of operations in this part of the Mediterranean was the possibility of effecting a landing, with the object of cutting the Baghdad railway, thereby effectively dividing the Turkish Empire in two. This was an option to the Dardanelles campaign, or at least an alternative should the defences there prove to be too strong.

From 6 February it was noted that there were regular mule convoys in the vicinity of the port of Alexandretta (now Iskenderun) and at 10.50 am on the 8th a Flag of Truce was hoisted and a notice was sent ashore informing the Governor, the Kaimakam, that the road must be closed for pack animals at night and that any such animals would be considered as military in origin and fired upon.

Having done this the ship patrolled along the coast, observing a large and unusual number of pack animals on the road, in bunches of 10 to 20 mules. Captain Hall-Thompson considered it necessary to ascertain whether or not these were military stores and at 4.00 pm sent an armed party ashore to find out, peacefully if possible, what the packs contained.

When well away from the shore the party was attacked on three sides by Turkish troops in what was a well laid ambush.

The landing party of 2 officers and 15 men, under the command of Lieutenant Fitzadam Millar RN, proceeded inshore in the ship’s cutter, which was armed with a Maxim gun. A dry river bed about 4 miles from Alexandretta, was chosen as the landing place and was swept with a few rounds of shrapnel, as a few trenches were known to exist in the vicinity. The land beyond the landing place was hilly and thickly wooded. Once ashore the landing party moved inland towards the road. When well away from the shore the party was attacked on three sides by Turkish troops in what was a well laid ambush. A retreat was made down the dry river bed, but the enemy fire was such that they could not make the beach. Able Seaman Stanbury was killed and five others wounded, including William Knowles and another man from Christchurch, John Moreton.

All partys, including the wounded were eventually recovered to the ship after dark, but William died early the next morning and Moreton the following day. Both were buried at sea.

Able Seaman William Knowles has the dubious distinction of being the first member of the New Zealand Naval Forces to die as a result of enemy action. When the news of his death was published in the New Zealand newspapers, many of the businesses in Lyttelton flew their flags at half-mast as a mark of respect for him. William had married in 1904 and was survived by his wife and two children.