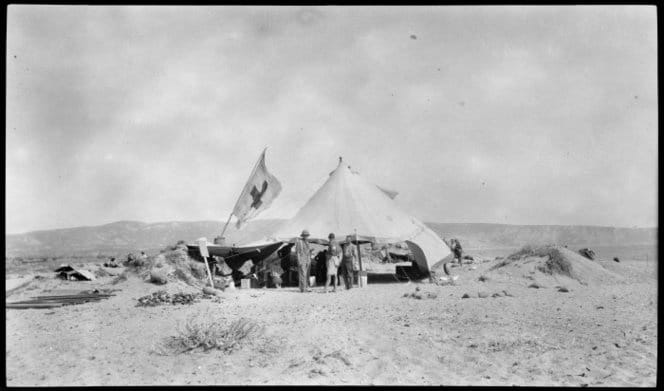 The Royal Naval Division was a naval unit that fought on land as infantry. It participated in the Gallipoli campaign and then in France on the Western Front.

A number of New Zealanders served in the Division including Bernard Freyberg who won the Victoria Cross.

The genesis of the Royal Naval Division was developed some years prior to the war. Initially the concept was for a brigade of Marines the aim of which was to seize an advance base or protect any temporary naval base.

All the necessary arrangements for this force were in place before 1914.

Shortly before the war consideration had also been given to the anticipated 20,000 to 30,000 reservists who could be mobilised in the event of war, but for whom there were no billets at sea.

It was therefore decided that some of these men could be formed into two further brigades, to supplement the Royal Marine Brigade.

The RNR men were seasoned mariners and those of the RFR, mainly stokers, had discipline and experience of the Navy.

With the outbreak of war the Marine Brigade was duly formed and ready for service. On 16 and 17 August Winston Churchill, First Lord of the Admiralty, issued two minutes which outlined the composition of the two naval brigades.

Each battalion was to comprise a mix of RFR, RNR and RNVR. He further detailed the arrangements of officers and petty officers with their envisaged source.

Within two weeks the Naval Brigades were being concentrated at Walmer and Betteshanger and with petty officers the strength of each battalion was 937.

The battalions were given naval names, rather than the basic numbers used by the Army:

This however, was just the basis of a division. To this needed to be added amongst other supporting arms, medical officers, engineers, administrative staff, signals, artillery and a supply train.

Provision of these elements was hampered by the unit being under an Admiralty committee and on 1 October responsibility for the division was rightly transferred to the Marine Office.

Meanwhile the situation on the Continent was becoming critical and on 26 August the Marine Brigade was despatched to Ostend to assist in the garrison of that port.

No attack eventuated and the brigade returned to England on 1 September where further training was undertaken and older men were replaced by new recruits.

Recruiting and training for the naval brigades continued with a complex variety of personnel. Generally well educated men from the pre-war RNVR were supplemented by a large number of men surplus to Army requirements, largely miners from the northern counties.

The RNR men were seasoned mariners and those of the RFR, mainly stokers, had discipline and experience of the Navy. Although seemingly quite disparate the stokers and the north-country miners were all hard men and formed the back-bone of the division.

Amongst the officers who joined at this time were the New Zealanders Bernard Freyberg, later win the Victoria Cross and his brother Oscar, Arthur Asquith, son of the British Prime Minister, another New Zealander, Clyde Evans and the poet Rupert Brooke.

During September the threat to the Channel ports was apparent and with it the realisation that the loss of these ports would mean that the BEF could not be supported.

Both sides then began what is often referred to as ‘the race to the coast’. With the bulk of the British Army already committed further south there was a need to form a new force to defend these ports.

The Royal Marine brigade was one obvious unit and Winston Churchill then offered the two new Naval Brigades, albeit they were still being formed.

The Royal Marines arrived at Dunkirk on 21 September where it was joined by a force of Royal Naval Air Service armoured cars.

Within days it was appreciated that the main threat was to Antwerp and this became the focus of attention. In the early hours of 6 October the two Naval Brigades arrived at Antwerp, less than six weeks after their inception.

The Antwerp enterprise was essentially a delaying operation and by 10 October it was all over.

However, as a result of difficulties and misunderstanding in communication, in the ensuing withdrawal the headquarters and three battalions (Collingwood, Benbow and Hawke) of the 1st Brigade marched over the border into neutral Holland, to be interned for the duration of the war.

Back in England the Division reformed. A new camp was being built at Blandford and a proper training regime instituted. New recruits replaced the lost battalions and the missing divisional elements were established.

Part of this was the divisional supply train which was commanded by Lieutenant Colonel Edward Chaytor (later Major General Sir Edward) on loan from the New Zealand Expeditionary Force.

By the end of January 1915 most of the new camp was completed and with the exception of three battalions, still undergoing basic training, the Division was now concentrated there.

However, on 1 February two of the Marine battalions embarked for an unknown destination and less the three absent battalions, the remainder of the Division also embarked for places unknown on 1 March.

The destination was Gallipoli. Two days before the landing Rupert Brooke died and was buried by his fellow officers, including Arthur Asquith and Bernard Freyberg, ashore that evening.

During the fighting at Gallipoli the Division was fully concentrated for the first time when the missing three battalions arrived at the end of May, just in time for the June battles.

The losses in these battles were heavy and as a consequence Collingwood and Benbow battalions were disbanded and their survivors posted to the other battalions.

Compounding the losses in action was the withdrawal of the 300 RFR stokers, for sea postings.

On completion of the withdrawal from Gallipoli, the Division remained in the Eastern Mediterranean while its future was determined.

In May 1916 the Division arrived in France, but there were insufficient men to form the 12 battalions required and thus four Army battalions joined the Division to make-up one brigade.

At the same time the Division came under the control of the War Office and its title was altered to 63 (RN) Division. The two naval brigades were the 188th (1st and 2nd Marines, Anson and Howe) and the 189th (Hood, Drake, Nelson, Hawke), while the Army battalions formed the 190th Brigade.

Supporting the infantry were all the other elements of a division, from transport to machine guns, to artillery and engineers.

The Division fought with distinction in France, during which five VCs were awarded to members of the Division. A final re-organisation of the Division occurred in January 1918 when the strength of infantry brigades was reduced to three battalions.

As a result, Howe and Nelson battalions were disbanded and one of the Army battalions was transferred.

On the night of 10 November 1918 the Division prepared to make an attack the next day on a two brigade front on Givry, which duly took place and so when the armistice came into effect at 11.00am, the two naval brigades were side by side in the front line.

Shortly afterwards, but not as quickly as it was formed, the Royal Naval Division passed into history.