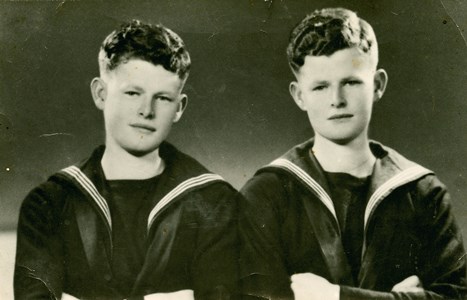 Twin brothers Bruce and William Anderson were members of the RNVR (NZ) at the start of the Second World War.

Born in 1921 they grew up in St Heliers, Auckland. In 1940, they joined the New Zealand Division of the Royal Navy as ordinary seamen.

Bruce and William arrived at Philomel on 15 April 1940. Because they already had a period of training behind them, they were posted to the RNVR Headquarters in Auckland for ‘special instruction.’

In May 1940, they along with other young New Zealanders were sent to Britain as part of a programme known as Scheme B.

They were two of only 157 men who were considered eligible to be sent overseas. The 157 men were sent in five drafts between August 1940 and January 1941.

Under the Admiralty’s Scheme B the plan was to facilitate:

The enrolment of potential candidates for commissions as ordinary seamen with a view to their promotion to commissioned rank after a period of service.[2]

Upon arrival in England, the men were given training as ordinary seamen at a Royal Navy shore establishment (such as HMS Ganges) and drafted to sea for three months.

At the conclusion of their training a selection board would consider the candidate for further training as an officer.

Bruce and William Anderson arrived in England and were trained at the shore establishment HMS Ganges. They were both promoted to the rate of Able Seaman on 7 August 1940.

Unfortunately, we don’t know a lot about what they did while serving in the Royal Navy.[3]

The Leander-class cruiser HMS Neptune was a sister ship to the Achilles and Leander, then serving with the Royal New Zealand Navy.

It had been planned that Neptune would replace Leander on the New Zealand Station, but she was diverted to the Mediterranean.

In July 1941, Neptune was deployed into the eastern Mediterranean for operations between Malta and Egypt and off the North African coast.

On 17 August 1941, William and Bruce were posted to Neptune.[5] This is unusual in that it was normally the practice within the Royal Navy not to post brothers to the same ship.

The decision may have been influenced by the fact that in 1941, 148 New Zealanders were also serving with the ship.

In December 1941, HMS Neptune was leader of Force K under the Command of Captain Rory O’Connor.

On the evening of 18 December, Neptune sailed from Malta at high speed with six destroyers to seek out the Italian Battleship Force, which had been sighted by aerial reconnaissance about half way between Malta and Benghazi.

At about 0100 on the morning of 19 December 1941, the force was about twenty miles from Tripoli sailing in single line ahead on a course of approximately south by west.

At 0106 Neptune whilst leading the group struck and exploded a mine on one of her paravanes, now going full astern she hit another mine, which wrecked her propellers and steering gear thus bringing the ship to a standstill.

A minute or so later she exploded a third mine and took a heavy list to port.  Efforts were made to rescue the Neptune’s crew in the rough seas, but when at about 0400 the Neptune set off a fourth mine, she unfortunately quickly rolled over and sank[6]

When the ship hit the fourth mine the order was given to abandon ship.

A heavy sea was running and the men had to go overboard, death came quickly to many of her company. Many perished as they tried to swim to the destroyer HMS Kandahar. Both Bruce and William were killed and went down with the ship.

Only sixteen men survived the sinking and were left afloat on a raft. They included Captain O’Connor and two other officers and one New Zealand rating, Able Seaman J.B. Quinn of Kaiwarra, Wellington who died on 20 December.

All but one succumbed to thirst and exhaustion during the next six days, until the sole survivor, an English rating, Leading Seaman Norman Walton, was rescued by an Italian ship. He was later interned as a prisoner of war.

Over 750 men including 150 New Zealanders died in Neptune.

The names of two officers and 148 ratings including Bruce and William Anderson are remembered at the Navy Museum.

The sinking of HMS Neptune and the loss of 150 New Zealanders is the worst naval disaster, to date, in the history of the Royal New Zealand Navy.

HMS Neptune’s loss on 19 December, 1941 brought grief to many homes in every city and major town in the Dominion, as well as in country villages from Auckland to Southland.[7]

Bruce and William Anderson are also remembered along with their crew mates from Neptune at the Memorial Wall within the Devonport Naval Base.

They were just twenty years old when they perished.