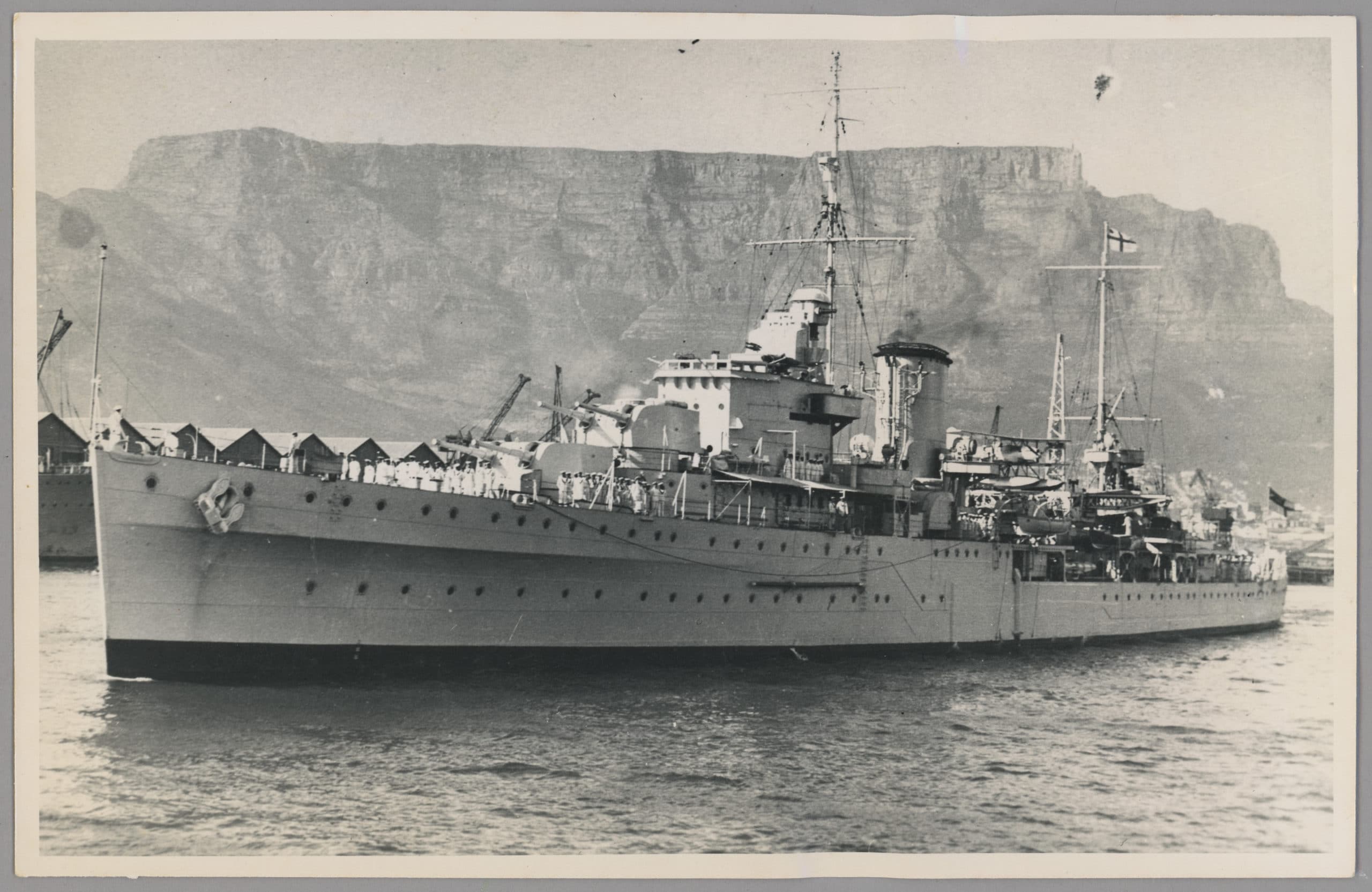 A Royal Navy cruiser, HMS Neptune struck four enemy mines and sank off Libya early on the morning of 19 December, 1941. Seven hundred and sixty four men lost their lives. Among them were 150 New Zealanders.

In early 1941, the New Zealand Government had answered British Admiralty’s call for more sailors to man the increasing number of warships being brought into service. The intention was for New Zealand to provide a crew for an additional Leander-Class light cruiser to serve alongside its existing ships, HMS Achilles and Leander. HMS Neptune was approved for this purpose.

Neptune had been expected to leave Britain for New Zealand in May 1941, but because of the heavy loss of cruisers during the Crete Campaign, it was instead attached to the 7th Cruiser Squadron in the Mediterranean. Neptune joined Admiral Cunningham’s Malta based Force K. On 17 December, every available ship was deployed to protect the oiler HMS Breconshire on its passage to Malta. At the same time, the Italians were sending an important supply convoy to Tripoli, Libya.

Force K sailed on the 18th December to intercept the Italian convoy. There was a strong South-Westerly wind and a heavy sea. At 1am the ships were 30km from Tripoli when they sailed into an uncharted deep-water minefield. Neptune triggered a mine with one of its protective paravanes (towed, winged, underwater object used as an anti-submarine weapon), while astern, the cruiser HMS Aurora also detonated a mine.

Reversing to get clear, Neptune exploded two more mines, damaging its propellers and steering gear. Over the following three hours other ships made several attempts to assist. But when the destroyer, HMS Kandahar also hit a mine, Neptune’s Captain, Rory O’Conor flashed a warning to other ships to ‘keep away’.

Just after 4am HMS Neptune struck a fourth mine and sank within minutes. Only 16 men managed to reach a life raft. Over the next five days they died one after the other. Able Seaman Norman Walton was the sole survivor. He was rescued by the Italians on Christmas Eve and became a Prisoner of War. Aged just 20, he spent 15 months as a POW before being released in 1943. He died aged 84, in April 2005.

Amongst the 150 New Zealanders (148 ratings and two officers), there were two sets of brothers including twins Bruce and William Anderson from Auckland. Neptune was not a New Zealand ship, unlike her sister ships HMS Achilles & Leander, but her loss brought grief to many homes throughout the Dominion and cities and towns across New Zealand. The names of the New Zealanders who were lost aboard Neptune are recorded on the Memorial Wall at the Devonport Naval Base in Auckland.