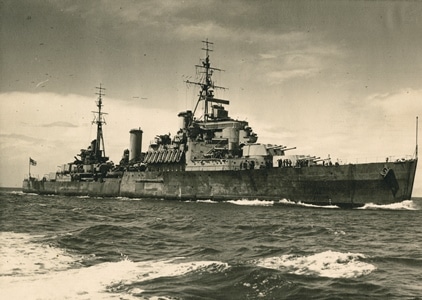 In February 1945 Davis-Goff joined the cruiser HMNZS Gambia , which was operating as a unit of the Fourth Cruiser Squadron of the British Pacific fleet. Gambia was off Japan at the cessation of hostilities in August 1945, and he was in command of its landing party, which took the surrender of the Japanese naval base at Yokosuka. 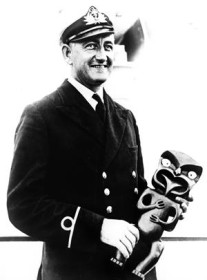 George Raymond Davis-Goff was born on 24 September 1905 at Renwicktown (Renwick), Marlborough, the son of William Francis Davis-Goff, a labourer, and his wife, family Asterson (Assesen), who was of Swedish descent. By 1915 the family had moved to Masterton and George went to Lansdowne School, later attending Masterton District High School from 1917 to 1919.  He left school to work for a printer, before joining the New Zealand Naval Forces on 9 August 1921 as a seaman boy.

After initial training on the depot ship HMS Philomel, Davis-Goff joined the cruiser HMS Chatham on 5 May 1922 as Boy First Class. A year later, by then an Able Seaman, he travelled to the United Kingdom where he underwent training at the shore establishment HMS Vernon , qualifying in torpedoes. To advance in the navy he needed formal educational qualifications, which he attained despite the difficulties of having to study out of work-time in crowded and noisy conditions aboard ship. In 1925 he joined the D-class cruiser HMS Diomede , on its first New Zealand commission. Promoted to Acting Leading Seaman in 1927, he was involved in operations ashore against the Mau in Samoa in 1928.

That same year he returned to England for further specialist courses, on completion of which he rejoined Diomede, there for a refit. He became a Petty Officer in 1931 and returned to the United Kingdom in 1932 to undergo the specialist courses for promotion to Warrant Officer. Following this he was promoted to torpedo gunner, the first New Zealand entry to achieve warrant rank. Successive appointments followed to Diomede and the cruiser HMS Achilles; the former involved taking part in operations with the Royal Navy during the Abyssinian crisis in 1935–36. However, Davis-Goff was unhappy and tried to resign from the navy, but this was not permitted by the New Zealand Naval Board. He felt the board had treated him unfairly on several issues, and he had, at this time, the responsibility of providing for his mother and one of his sisters.

When the Second World War broke out in 1939, Davis-Goff was serving in Achilles and was on its upper deck in charge of the torpedo tubes during the Battle of the River Plate on 13 December 1939. One of his tasks was to make the depth charges safe, a hazardous role with danger not only from enemy fire, but also from the blast of the ship’s own six-inch guns. For this he subsequently received a Mention-in-Dispatches. In 1941 Davis-Goff underwent further courses for promotion in the United Kingdom and was promoted to Acting Lieutenant in May, being confirmed in the rank eight months later. As with his earlier warrant, he was the first New Zealander to reach a commissioned rank from the lower deck. After service with the Royal Navy, during which he escorted a convoy to Russia, Lieutenant Davis-Goff joined the cruiser HMNZS Leander in June 1942. He was present when she was badly damaged during the Battle of Kolombangara in the Solomon Islands. He stayed with Leander for much of the ship’s refit in the United States, being promoted to Lieutenant Commander in August 1944. In February 1945 Davis-Goff joined the cruiser HMNZS Gambia , which was operating as a unit of the Fourth Cruiser Squadron of the British Pacific fleet. Gambia was off Japan at the cessation of hostilities in August 1945, and he was in command of its landing party, which took the surrender of the Japanese naval base at Yokosuka. For his actions in the latter part of the war he was awarded the DSC.

After the war George Davis-Goff was promoted to the rank of acting commander in 1946 and served ashore in Auckland. Confirmed in that rank in 1947, he was posted to England for staff courses and a period of exchange service in 1950–51. On his return to New Zealand he was appointed executive officer of the Improved Dido-class cruiser HMNZS Bellona for slightly over a year. He then became senior officer of the New Zealand frigates in Korea and in command of the Loch-class frigate HMNZS Hawea. The ship’s two deployments to the Korean War were notable for the frequent provision of naval gunfire support to forces ashore. Davis-Goff was promoted to the rank of Captain and awarded a Bar to his DSC. After Hawea’s return to New Zealand, Davis-Goff was appointed head of the New Zealand Joint Services Liaison Staff in Melbourne in November 1953, a post he held for nearly three years. He was then appointed Naval Officer in Charge, Auckland, and received the rank of Commodore in 1957. In recognition of his work Davis-Goff was made a CBE in 1958.

On 13 November that year, having served in the New Zealand navy for over 37 years, Commodore Davis-Goff successfully applied to be placed on the retired list, and he retired on 13 May 1959. Davis-Goff’s career was remarkable in many ways, but most significant was his progress, by his own efforts, from the lowest rank in the navy to commodore, one of the highest ranks in the service.

George Davis-Goff married Mabel Catherine Slaweski (née Kenny), a divorcee from Melbourne with a young daughter, in Auckland on 1 June 1939. With the outbreak of war shortly afterwards, the couple spent most of the next five years apart, with Mabel living mainly in Melbourne. She fell seriously ill in October 1947, but had improved by the end of the year. George went to London in February 1948 and Mabel returned to Melbourne to be with her daughter, who was now a medical student at the University of Melbourne. In July 1948 Mabel died in Melbourne. Davis-Goff’s second marriage was to Ailsa Ellen Blair (née O’Donnell) in Auckland, on 4 May 1951. She also had a daughter from a previous marriage.     In retirement the Davis-Goffs lived in Melbourne and later Onehunga, Auckland. On the evening of 30 May 1987 George suffered an accident at home and died in Green Lane Hospital. His wife, Ailsa, survived him.