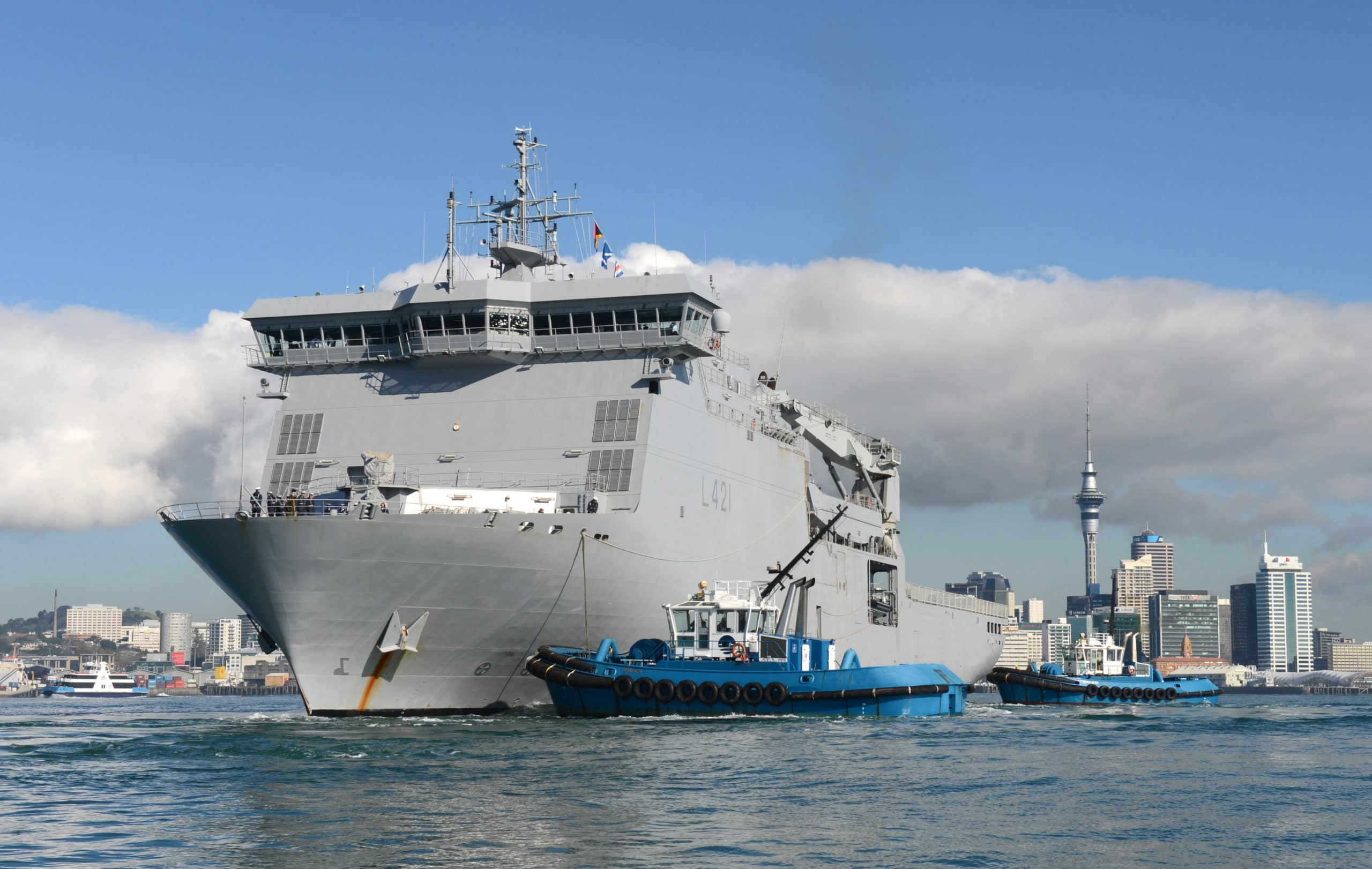 As part of the Project Protector plan the RNZN introduced a multi-role vessel HMNZS Canterbury, that could support disaster relief, humanitarian operations, amphibious operations, and logistical support operations. The design was based on a Dutch RORO [roll on-roll off] vessel that did not have a well deck but could embark directly from the stern ramp.

Complement:  360 troops or personnel plus equipment

As part of the Project Protector plan the RNZN would reequip with a multi-role vessel that could support disaster relief, humanitarian operations, amphibious operations, and logistical support operations. The design was based on a Dutch RORO [roll on-roll off] vessel that did not have a well deck but could embark directly from the stern ramp or through the fitted LCMs. To facilitate ease of landing for vehicles and cargo the LCM were fitted with a built in stable lock system on the forward ramp. The shop has been ice-strengthened for operations in the Ross Sea. The ship is designed to carry 360 troops with their personal equipment including a company-sized landing group [250]. It can carry five helicopters including the new NH90 light helicopters[1] or the Seasprite naval helicopters. Up to sixteen light armoured vehicles [the LAVs], fourteen light operations vehicles [jeeps, light trucks], 24 cars, and up to 33 standard shipping containers. As part of her role she has been fitted with a large distiller and can produce up to 100 tons of fresh water per day. Initial construction was undertaken at Merwede Shipyard in Rotterdam and was then towed to Tenix defence yards for fitout and completion.

The previous HMNZS Canterbury carried the battle honours of the RN vessels that had had used the name. In early 2007 Chief of Navy made the decision that the battle honours would not be transferred as it was inappropriate for the new ship. However the ship’s badge would be retained as above.

During her commission the vessel has proved its worth as a MRV and fulfilled its purpose under Project Protector.

Able Seaman Byron Solomon was killed during a training exercise with the RHIB.

The two LCMs had to be replaced because of design flaws which make the bow ramps prone to cracking. There are also problems loading cargo at sea, and stability issues. These were some of the problems to affect the fleet of seven ships bought by the Government for $500 million. Australian builders BAE Systems [formerly Tenix] will pay $85 million, some of which will go towards designing and building two new LCMs.[2]

Canterbury is deployed to the south Pacific to visit various island groups to supply equipment such as water pumps and diesel engines. During the 2013 PACIFIC PARTNERS 163 helo sorties from Canterbury [138 by the French Puma and 25 by the Seasprite SH-2G] carried 8,525kg – cooperation with SALT [ship’s amphibious leading team Army personnel][3]

[1] These replaced the Iroquois.