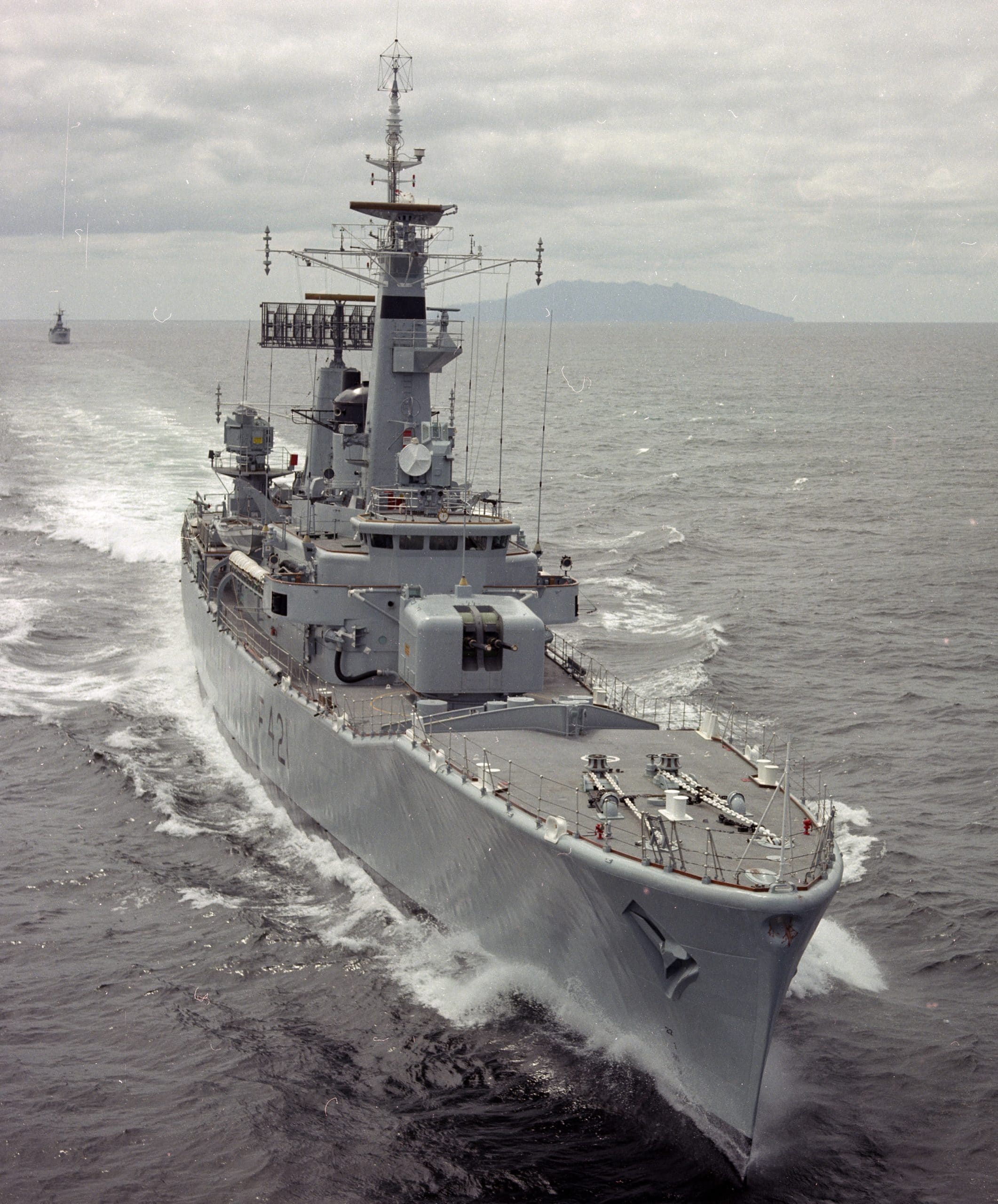 Canterbury was one of two New Zealand frigates that provided operational support to the Royal Navy in 1982 and 1983. When the Falklands War broke out in April 1982, New Zealand offered to relieve a Royal Navy ship on operational duties in the Indian Ocean, so that one of its ships could be available for operations in the South Atlantic.

Canterbury was laid down in Yarrow Shipbuilders’ yard at Scotstoun, Glasgow, on 12 April 1969. It was the fourth and last ship in the frigate replacement programme of the 1960s. The first two ships to replace the six wartime Loch-class frigates had been ordered in 1957. However, financial constraints meant that only a single ship was ordered in 1963 rather than two. To meet the shortfall in numbers required to discharge New Zealand’s naval commitments, HMS Blackpool was hired from the Royal Navy in 1966. This was pending approval to build a fourth frigate, which was finally given in 1968.

Canterbury was one of the last Leander-class frigates to be built. The last one of the Royal Navy’s ships was also built by Yarrow. On 6 May 1970, Her Royal Highness Princess Anne broke a bottle of champagne on the bow of the hull and Canterbury slid down the slipway into the waters of the River Clyde. Seventeen months later, on 22 October 1971, a day after the anniversary of the Battle of Trafalgar, the ship was commissioned into the Royal New Zealand Navy by Captain K. Michael Saull. Canterbury was the second vessel after Waikato to carry a helicopter.

Canterbury was named in keeping with the policy of ship names instituted with the first of the new frigates. The ship was named after a South Island province of New Zealand. Over the years, Canterbury has provided literally thousands of men and women for the navy and the province took the ship to its heart, donating thousands of dollars’ worth of equipment and items. One of the very modern pieces of equipment given to the ship by the province in 1970 was a closed-circuit TV system. It was cutting-edge technology at the time. This provided not just an in-house entertainment system, but a means whereby information could be given without the need to gather everyone together on the upper deck or repeat it several times to different audiences. A Mini Moke was also given to the ship. The vehicle served the ship well for many years.[1]

Nearly eight months of trials and working-up followed before Canterbury sailed from Portsmouth for New Zealand via the United States and the Panama Canal. Shortly after arriving in Auckland on 24 July 1972, the ship made quick visits to Lyttelton and Timaru, before getting into the normal peacetime routine of an operational frigate.

A year after arriving in New Zealand, Canterbury was the second of two frigates to be dispatched by the government to protest against French nuclear testing at Mururoa Atoll, some 3,600 nautical miles (6,667 km) to the north-east of New Zealand. She relieved Otago off the atoll at the end of July. She remained on station, supported by the Australian tanker HMAS Supply, until the middle of August. Then, after the last test of the season, Canterbury returned to Auckland.

Besides maintaining a relationship with Princess Anne, Canterbury had other links to the Royal Family. The ship was an escort of the Royal Yacht Britannia during the royal tours of 1974 and 1977. In 1977, Canterbury deployed with a Task Group of the Royal Australian Navy, led by the aircraft carrier HMAS Melbourne, to Britain. There the ship represented the Royal New Zealand Navy at the Queen’s Silver Jubilee at Spithead in September.

Canterbury was one of two New Zealand frigates that provided operational support to the Royal Navy in 1982 and 1983. When the Falklands War broke out in April 1982, New Zealand offered to relieve a Royal Navy ship on operational duties in the Indian Ocean, so that one of its ships could be available for operations in the South Atlantic. Armilla Patrol was the name given by the Royal Navy to its operations in the Indian Ocean and during its first deployment Canterbury was the senior ship and thus in charge of the whole operation. After being relieved by HMNZS Waikato, Canterbury was deployed again to the Indian Ocean later in 1982 and continued into 1983. These deployments were hard on the crews, mainly because of the monotonous nature of the patrols, and the heat, but also because of the sandstorms and the few port visits. Those ports that the ships were able to visit lacked the facilities available in many parts of the world. Canterbury and HMS Galatea were jointly awarded the Wilkinson Sword of Peace for their operations in the Indian Ocean.

Canterbury’s experiences in 1984 and 1985 illustrate the impact of the decision to break from the ANZUS Pact in 1985. In 1984, Canterbury freely exercised with the United States Navy. But by January 1985, the CO referred to the ‘unsettling NZ political climate’ in his reports and speculated that this was affecting morale of the ship’s company. Later that year, Canterbury arrived in San Diego. No official calls were made to or received from United States Navy personnel. After taking part in exercises with the Royal Canadian Navy, Canterbury was forced to detach from further participation due to the imposed ANZUS restrictions. The ship returned home.

Peacekeeping operations of various sorts became regular features of naval operations during the 1990s, and Canterbury took part in several. The first was joining the Multinational Interception Force in the Arabian Gulf, enforcing a United Nations embargo on Iraq in 1996. In the Gulf, the ship undertook boarding operations, inspecting shipping for contraband cargoes headed for Iraq, and prohibited exports of oil from that country.

By 1996, after various attempts to negotiate peace between the Papua New Guinea Government and Bougainville rebels, the New Zealand Government hosted a series of talks by the warring parties. In 1997, a truce was negotiated with an unarmed New Zealand-led multi-national Truce Monitoring Group inserted into the island of Bougainville. RNZN personnel were assigned to the TMG, and Canterbury, Endeavour and Manawanui were deployed to assist the insertion of the group. Canterbury’s ship’s company provided much of the workforce needed to quickly set up the TMG, open roads and assist with initial administration. One aspect of this operation was the painting of the ship’s Wasp helicopter bright orange, the colour of the peacekeeping units. This signified its neutrality.

Despite being officially relegated to a training role, in 1999 the ship took part in operations surrounding the independence of East Timor. Four operational patrols were undertaken during which the ship experienced close encounters with a submarine and Indonesian aircraft. Once the situation stabilised, the ship’s company was able to assist in the rebuilding efforts ashore. Canterbury covered the arrival and landing of the New Zealand battalion at Suai, during October 1999.

Other peacetime operations included providing civil aid to the Pacific Islands and assisting in disaster relief, such as that in the wake of Cyclone Val in Western Samoa in December 1991. The ship’s personnel also built ‘Canterbury’ hut for use by the Department of Conservation and the Meteorological Service on Campbell Island in 1993.

The sea can be a very dangerous place, which regularly results in the necessity to mount Search and Rescue operations. Canterbury took part in many over the years. These included the search for the yacht Starlight Express in 1979 and the fishing vessel Kai Ona in 1997.

Over the years, Canterbury undertook numerous routine deployments to the Far East and to the western seaboard of North America. These deployments provided a mix of operational training in the form of exercises with other navies and furthering New Zealand’s interests by port visits. During such visits the ship frequently hosted functions to showcase New Zealand products. A major naval effort in which Canterbury and three other frigates participated was in providing support to the New Zealand exhibit at Expo 88 in Brisbane. Not only was personnel support given, but members of the ships’ companies were actively involved in some of the performances, and the Maori Cultural Groups combined to provide a unique dimension to the New Zealand exhibit.

Two significant deployments were the first deployment to the United States and Canada following the ANZUS rift with the United States in 1985 and the first visit by the Royal New Zealand Navy to China in 1987. Other notable deployments were to Crete in 1991 for the commemorations of the 50th anniversary of the Battle of Crete, and to Britain in 1993 for the 50th anniversary of the Battle of the Atlantic.

As Canterbury approached 30 years of service in the late 1990s, the ship began to show its age, but it was decided that the ship would keep operating until 2005 when it was envisaged that its replacement would be in service. In her nearly 34 years of service the ship was fortunate that the reason for its existence – to fight a war – did not eventuate. Instead, Canterbury was actively involved in maintaining an effective naval force, helped bring about peace in various countries and assisted people in rebuilding their lives after disasters. Canterbury represented New Zealand overseas in all the various capacities required by the government.

The frigate was sunk as an artificial reef in 2007. The RNZN has a new multi-role vessel in service from 2007 that carries on the name of Canterbury.

When it was decided that the second New Zealand Leander-class frigate was to be named Canterbury, the Royal Navy was approached for the transfer of the name and associated Battle Honours. This was duly sanctioned. In a break from past precedent, however, it was decided that although previous Royal Navy ships had borne the name and there was an approved badge in existence, HMNZS Canterbury would have a distinctively New Zealand badge. The Battle Honours of the Royal Navy ships were, however, accepted.

In keeping with recent practice, a competition was announced for secondary schools in the Canterbury Province for the design of a suitable badge. This competition was held during 1969 and the winning design was submitted by 14-year-old lain Cameron of Papanui High School in Christchurch. His proposal included crossed shepherd’s crooks and a sheaf of wheat. These represented the two main industries of the province. Before the badge was approved the crossed shepherds’ crooks were changed to bishops’ croziers (staffs) to represent the status of Christchurch as a cathedral city. One significant departure from the standard New Zealand Navy ship’s badge is that the ship’s name is shown in black letters on a red ground (Canterbury provincial rugby colours) rather than black letters on a white ground. This departure was queried by the Captain Superintendent HMNZ Dockyard when the ship’s badge was being made. Although obviously confirmed, the reasoning was not documented. The final design was approved by the Naval Board in January 1970.

Although the Royal Navy ship used the motto Urbis fama fania navis (The fame of the city is the fame of the ship), this is not used by the New Zealand Canterbury.

CANTERBURY: A province in the central South Island of New Zealand, which takes its name from the city in England.

1969 – under construction at the Yarrow Shipbuilders in Scotstoun, Glasgow

1971 – commissioned into the RNZN 22 October at Scotstoun, Glasgow

1973 – present for second nuclear test in July at Mururoa

[1] There is an example of this vehicle in the museum’s exhibition.

[2] These are not used by the present Canterbury as per the direction of the Chief of Navy when the MRV was commissioned in 2007.