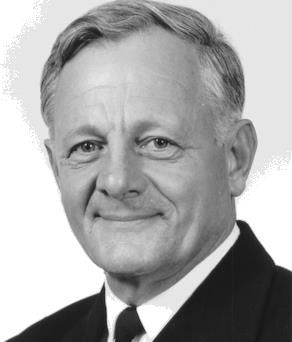 Rear Admiral Keith Saull was RNZN Chief of Naval Staff from 1 April 1980 to 31 March 1983. In 1951 he found himself as the Gunnery Officer of the Loch-class frigate HMNZS Taupo heading to the Korean War.  Taupo was to be involved in action in the Han River and at Yang do Island in 1952.

Keith Saull joined the Royal Navy as a Midshipman RNR on graduating from HMS Conway, a Merchant Navy training school, in 1945.  He was immediately posted to the British Pacific Fleet and joined the battleship HMS Duke Of York.

Early tasks included assisting in the re-occupation of Hong Kong, attending Japanese war trials and patrolling the waters of the Dutch East Indies whilst serving in the frigate HMS Black Swan.  Rather than being demobbed he joined an Extended Service Commission scheme and was posted to Palestine where he commanded the motor launch HMS Moreta intercepting illegal Jewish immigrants.  He was Mentioned in Despatches for his service in Palestine.

He transferred to the Royal New Zealand Navy in 1951 and within a few days of arrival in New Zealand found himself as the Gunnery Officer of the Loch-class frigate HMNZS Taupo heading to the Korean War.  Taupo was to be involved in action in the Han River and at Yang do Island in 1952.

Staff appointments included the Commanding Officer of the training establishment HMNZS Tamaki then at Narrowneck and postings to HMNZS Wakefield [HQ Wellington] and command of the frigate HMNZS Taranaki lead to 1971 when Admiral Saull was promoted to Captain and was posted to command the new Leander-class frigate HMNZS Canterbury.

In 1973 Admiral Saull proceeded to Washington as Naval Attache.  Prior to returning to New Zealand as The Commodore, Auckland [COMAUCK] he spent a year at the Royal College of Defence Studies.  He was promoted to Rear Admiral in 1980 and served until 1983 as the Chief of Naval Staff [CNS]. He retired from the RNZN at the conclusion of his term as CNS on 6 April 1983 and was placed on the RNZN List of Retired Officers on 17 April 1983.