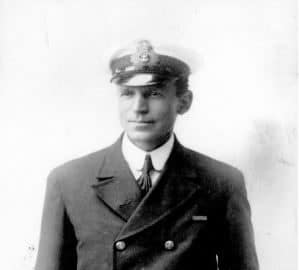 Lieutenant Commander Frank Arthur Worsley was an accomplished navigator and mariner as well as an Antarctic and Arctic adventurer. He had an eventful war from sinking submarines to fighting the Bolsheviks in Russia.

Frank Arthur Worsley was born at Akaroa, on 22 February 1872, the son of Vincent Georgiana Priscilla Fulton and her husband, Henry Theophilus Worsley, a labourer.

After attending Fendalton School he joined the New Zealand Shipping Company in 1887, serving on sailing ships between New Zealand and England for about a decade and qualifying for his Foreign Trade Master’s Certificate in 1900.

In 1901 Frank achieved his first command, that of the Government schooner the Countess of Ranfurly, which operated between New Zealand and the islands of the Pacific and he also saw service in other Government ships such as the Hinemoa and the Tutanekai.

He joined the Royal Naval Reserve (RNR) in 1902, being granted the rank of Sub Lieutenant and was able to undergo some training for short period in ships of the Australasian Squadron.

When the Government acquired HMS Sparrow to be utilised as a training ship, Frank was the first officer on the delivery voyage from Sydney and was in charge for the next year while the ship was at anchor in Wellington.

Following this Frank took leave from the New Zealand Government and when to Britain where he held sea-going positions with the Clan Line and the Allen Line before joining Sir Ernest Shackleton’s trans-Antarctic expedition, as Master of the Endurance.

The ship had to be abandoned in pack ice on the Weddell Sea in October 1915 and the party eventually reaching uninhabited Elephant Island.

From there a small group under the command of Shackleton set out in an open 22-foot boat, the James Caird, to reach South Georgia and arrange the rescue of the remainder of the party.

Frank’s navigation under the most difficult circumstances was the single overriding factor in the success of this 800-nautical-mile voyage and the subsequent rescue of the expedition and it is significant that the James Caird had been built to his specifications.

Subsequently, in 1920, Frank was made an Officer of the Order of the British Empire (OBE), civil division, for his navigation skills.

Back in England Frank was appointed to command HMS PC 61. This was a class of vessels built to resemble small merchant ships and operated as decoy ships to attract and sink submarines.

His First Lieutenant was Joseph Stenhouse, who had been First Officer in the Aurora, the support ship for the Shackleton expedition.

On 26 September 1917 PC 61 was at sea when a nearby merchant ship was torpedoed. Frank was able to manoeuvre his ship to where he expected the submarine to be and when it was sighted, rammed and sank UC 33.

For this action he was made a member of the Distinguished Service Order (DSO).

Shortly afterwards Frank was appointed to the armed yacht HMS Idaho a vessel of the Auxiliary Patrol, of which he was in command for nearly a year.

In September 1918 he was appointed to another Q-ship, HMS Pangloss, but that appointment was shortly cancelled and he was seconded to the War Office instead.

The reason for this was the increasing British involvement in the campaign against the Bolsheviks in north Russia.

Although he was officially Transport and Equipment Officer, he served briefly in command of HMS Cricket on operations. In August 1919, Frank was part of a large patrol behind enemy lines and assisted to bridge an unfordable river.

For his great leadership he was awarded a bar to his DSO.

After the war Frank joined another Shackleton expedition, which was completed in Shackleton’s honour following his death and was subsequently co-leader of a British Arctic expedition.

Although aged 67 at the outbreak of WWII Frank became actively involved and was still serving at the time of his death in 1943.