( Find out more about Photographs )

Tudor Collins (1898-1970) is recognised as New Zealand’s pre-eminent photographer of the Kauri Industry, his images of the last years of milling held in repositories around the country. Lesser known is his coverage of the Royal New Zealand Navy between the 1940’s – 1960’s, a body of work that places his achievement among the finest documentary photography of the era.

The scale of the collection
The Tudor Collins collection is vast; approximately 10,000 negatives and 3000 prints of naval content separated from a wider collection of around 45,000 images.

To deal with this volume, a joint team of photographic archivists, curators and collection assistants assessed the collection box by box to gain an overview. As the glass and celluloid based negatives and paper prints arrived in branded boxes that once held the unexposed materials, these boxes became the unit of assessment. The handwriting on the box ends, plus the description, condition, and content of the enclosure were noted. With a number allocated and the findings entered onto the searchable TC Inventory, the box was photographed.

The storage of this entirely monochrome collection was not to archival standards, so the material had suffered some damage expected with temperature fluctuations, oxidation, acidic storage boxes and being housed in their original glassine sleeves. Along with surface dust and dirt, most negatives showed oxidative silvering, mould and some delamination.

Remarkably, many of these negatives will deliver excellent pictures of substantial scale via digital imaging. The original Kodak and Ilford film offer fine grain and modulated grey-scale tones. On printing, sizeable enlargements of clarity, contrast and subtly are possible.

The collection had been rummaged, and only casually reinstated. A sequence of negatives in one box may stop and then reappear in another. Some notes on box ends may bear no resemblance to the content. These notes may be overwritten, crossed out, or have additional labels. The looping, faded handwriting often needs deciphering.

This muddle is mitigated by Collins’ practice of putting many negatives in glassine sleeves, both in clusters and singularly, and noting titles in a clear hand. These sleeve titles correlate with the enclosed scene, providing reliable references throughout the collection. Also, vessels can often be identified from the large negatives by serial numbers showing on their hulls. Likewise, locations can be confirmed by seeing known landmarks, coastlines, and the built environment.

The camera Collins used is not identified, though some inferences are possible. It probably had a waist-level viewfinder, allowing him to engage with subjects while monitoring the scene. And an interchangeable glass or celluloid film system, with a normal lens. This professional, medium-format model was outmoded even then, superseded by smaller, roll film cameras. He knew this camera intuitively however; it delivered excellent results in his hands. Such fluency allowed full attention to picture making.

When he began documenting the Navy during WWII, Collins was already an accomplished photographer and casual contributor of news and pictorial images to the NZ Herald and the Auckland Weekly News. His picture-taking of the service at this stage was informal, as a Petty Officer on a patrol launch who was good with a camera. This duality continued; the collection includes shots suitable for news outlets, for the Navy and their defence of the Hauraki Gulf, and pictures were taken while enjoying his personal outdoor pursuits.

The negatives show a mobile photographer at work, rapidly shifting level and viewpoint, interacting, shooting often. The image-making was essentially complete when the exposed film left the camera; the 8 x 10-inch prints show minimal darkroom intervention. As his shooting style used much film, he possibly had access to a plentiful, though unwanted, glass negative stock unaffected and exempt from the restrictions and scarcity of wartime.

Content of the collection
Tudor Collins’ prolific output during this period was various and multi-layered, its facets intersecting and occurring in parallel. Several broad strands are apparent:

Scenes of peace
He took numerous seascapes as the Navy launches of the Northern Flotilla traversed the Hauraki Gulf. These feature bays and inlets, rocky headlands, locals waving from rural wharves. Some have pristine clarity throughout deep scenes of calm. For others he trekked inland and uphill, yielding overviews of tranquil anchorages below. These serene images of natural New Zealand would have suited the pages of the pictorial Weekly News. The motif of photographing naval vessels in deep coastal waters was to recur.

Acts of war
The liner Niagara struck a German mine off Northland’s Bream Head, June 1940. Collin’s arrived in the first rescue craft, photographing at wave level among the wreckage, lifeboats and struggling passengers. His shot of the ship’s hull pitched skyward, moments before plunging from sight, is definitive.
HMNZS Leander was hit by a Japanese torpedo in the Solomon Islands, July 1943, killing 27 men and wounding 15. With makeshift repairs, the stricken ship limped back to Devonport Naval Base. In the Calliope drydock, Collins photographed the damage in forensic detail. His images are a sombre abstraction of mangled pipes and rent steel. Large numbers are chalked on metal plates, coding the destruction. The magnitude of the massive blast is seen in images of men dwarfed against the gaping hole. This austere series stands as a silent memorial to the sailors who lost their lives. He later photographed the wooden commemorative panel that records the human cost.

Visiting dignitaries
Royalty and military commanders held sway in the New Zealand psyche. Field Marshal Montgomery of Alamein, who New Zealand soldiers served within North Africa, was given a tumultuous ticker-tape welcome, which Collins covered from a parapet. General Freyberg, Commander of the 2nd New Zealand Expeditionary Force, was photographed addressing large military parades. Queen Elizabeth and Prince Philip are seen at Waitangi Day celebrations; the visit of Earl and Lady Mountbatten is recorded, along with Vice Regal entourages both in New Zealand and the Pacific Islands.

There is a letter to Collins, signed by Louis Mountbatten, via NZ Internal Affairs, among ephemera with the collection. It is a friendly thank you note to the photographer asking for further prints.

The Navy at attention
Collins photographed formations of men falling into line, assembled on deck, at attention, marching. These range from the mustering of crews on wharves and decks, to presentation of arms as officers and VIP visitors are piped aboard. He rendered these events with poise and precision; as he draws back and up during a Naval base parade, the rows realign in an angular interplay of light and shadow, reminiscent of modernist European photography. Elsewhere, at a Waitangi commemoration on a glorious day, the Navy parades on the Treaty House grounds, while bunting flutters on their ship in the bay.

The Navy at ease
The Navy held receptions and hosted dinners, which Collins photographed, along with weddings, family groups, and parties. The pictures show halls filled with people in evening dress; partygoers loosening up amid drinking, laughter, cigarettes, and acting-out to the camera. Naval weddings show bridal groups arrayed in garden settings; the grown daughters of a naval commander are photographed in a modern home. Another commander is seen on a family bush picnic. These photos are rich with socialising and celebration, clothing, interiors, and cars.

Days at sea
Collins photographed much at sea, whether in coastal waters or during offshore voyaging. The northern flotilla of launches is seen sweeping the sea lane, line astern. Floating mines are exploded by rifle fire. Depth charges ignite, huge columns of water cascading. Elsewhere, gun crews drill, lacing the sky with anti-aircraft fire. In foul weather off Northland, Collins snapped the patrol boat following closely behind. The bow is poised before pounding down. The launches are punching along in heavy seas and high winds, hugging the coast. A large jagged rock juts from the swell nearby. Overhead, a wild sky is smeared with clouds and rain.

Common Navy practices abound: navigating by sextant shots; semaphore with hand-held flags; sailors rowing a cutter in choppy seas; officers with telescopes underarm; a diver with full head helmet. And men waiting for a daily rum tot. Shipboard dentistry. A sailor writing a letter. The tedium and boredom of voyaging are also apparent in frames of wheeling seabirds, clouds, the ensign flying aft above foaming wake.

Pacific deployment
Naval visits to the Pacific Islands were anticipated months in advance. Landfall was greeted with generous and heartfelt welcome. The images are exuberant; dancers crowd the foredeck, grinning sailors in baggy shorts are festooned with tropical fruit. In one shot, the naval party saunters along a sandy track, with locals running alongside. There is a pram, dogs, and children, with palms framing the jubilation. There are scenes of mass singing and dancing, speeches, feasting, celebration, and sport.

Portraiture
Tudor Collins manner put people at ease, and it shows in his portraits. The expressions are relaxed and attentive. Many photos of uniformed men aboard ships are informal three-quarter shots, with a quality beyond mere likeness. Some people are named, many are not. He excelled with groups of every persuasion. The strongest image was usually reached in a few frames; with deft changes made to sightlines, levels, and body language. Among outstanding group portraits are photographs of ranking officers, an island government, and workers on the precarious Raoul Island wharf. This classic composition centres on a flattop truck, the men standing, lounging, perched on rocks behind. Collins handled candid portraits with equal skill; among them, women waving as a crew leaves for Korea.

South
During the 1950s, HMNZS Bellona entered the southernmost sounds of New Zealand, via their trip to Macquarie Island. The images show a pristine, eerie world of deep shadow and calm reflection as the ship moves forward. When he drops to water level and pulls away, the shots render the frigate minimal before a massive granite face rising sheer from the depths. Amid majestic glaciers, waterfalls, and mountain peaks, the ship manoeuvres quietly, a stark intruder in a setting of epic scale and solitude.

In conclusion
Tudor Collins embraced naval life and recorded it generously in photographs that frame the camaraderie, the traditions, the lethal hardware, the courage of the everyday. His restless energy, visual sensibility, and consummate skill move across the images, revealing a young service in the crucible of world events. As an archive of New Zealand’s recent past, it is of national importance, an unprecedented glimpse into the nation’s soul. That this remarkable collection has returned to the Navy in time for the 75th commemoration is a fitting homecoming. 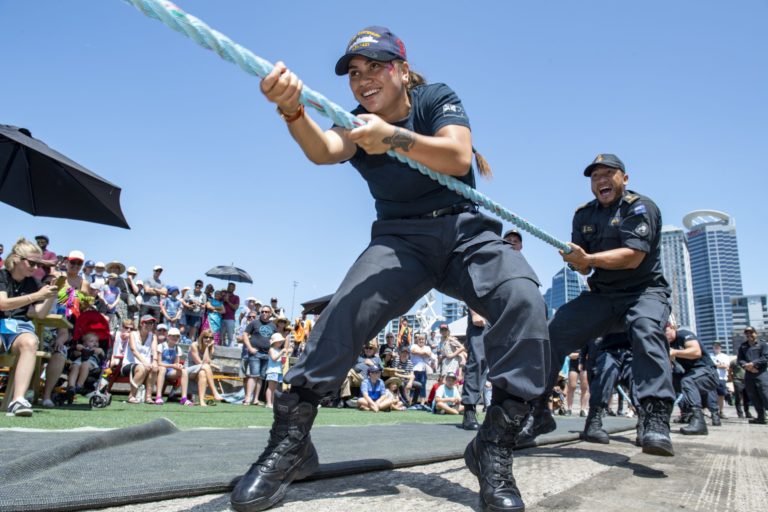 Standing Apart, Together As One – Exhibition 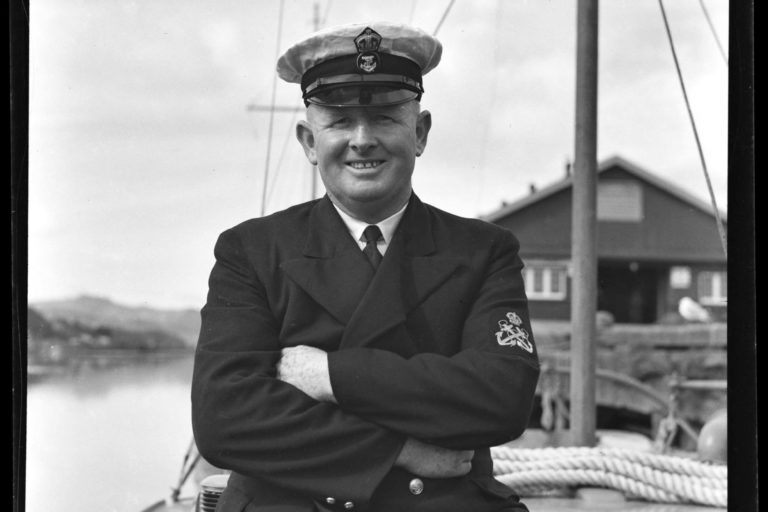 Tudor Collins served in New Zealand Navy and was a revered photographer. 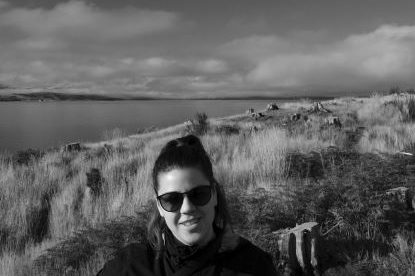 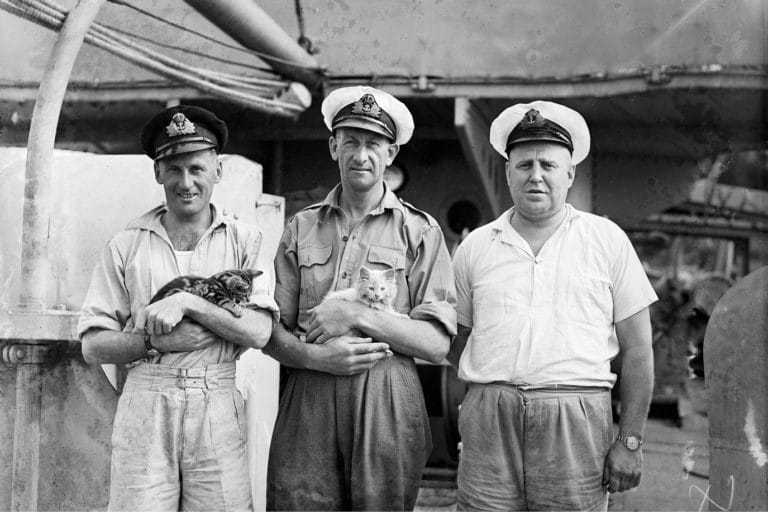 Courage of the everyday 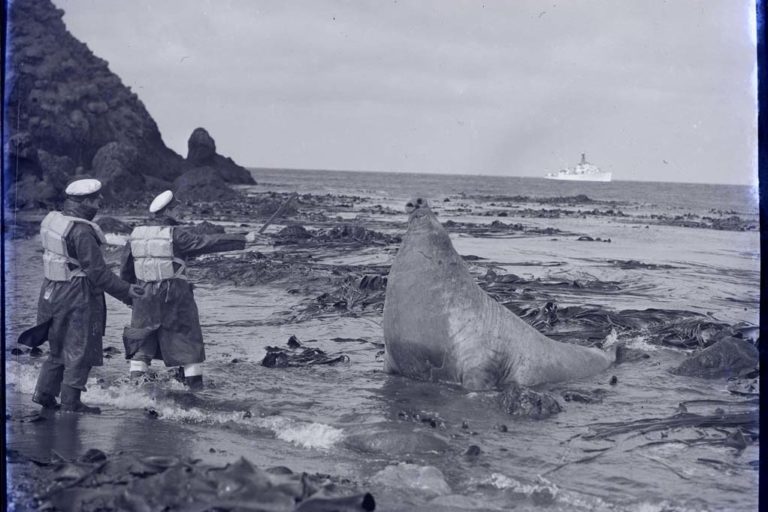 A collection of images at Macquarie Island taken by Tudor Collins. 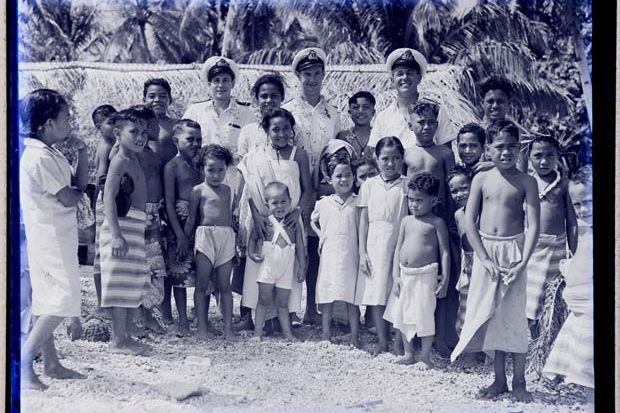 Tudor Collins in the Pacific

Photographer Tudor Collins photographed personnel and ships in the Pacific.