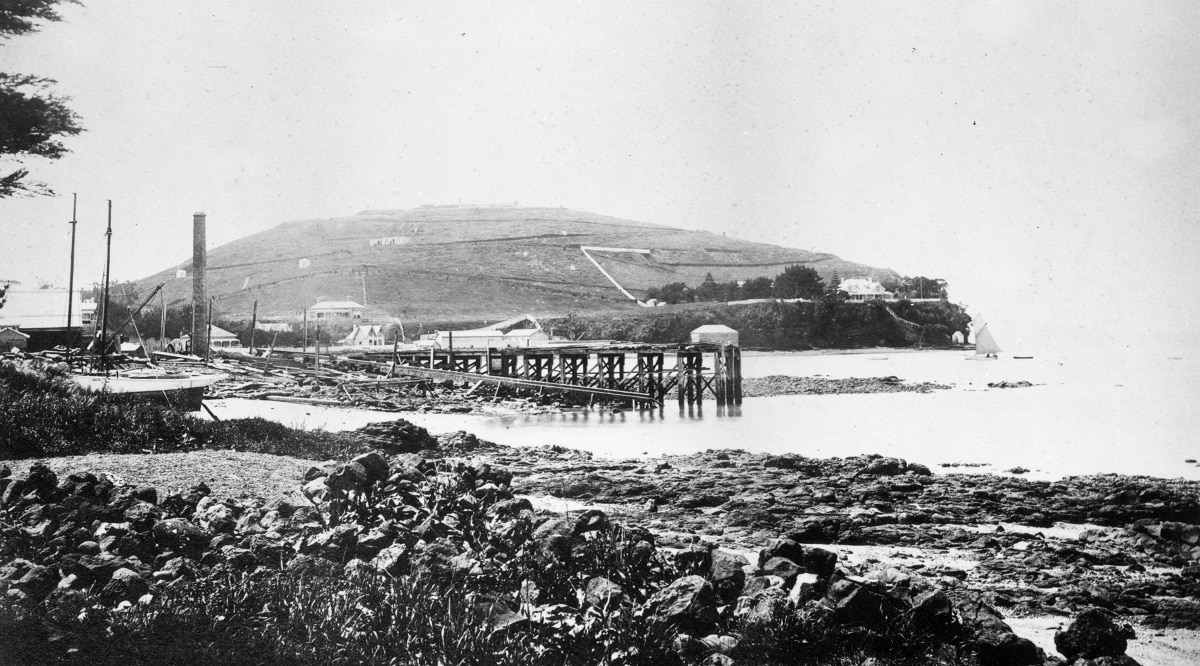 The first European settlers called the area we know as Devonport, “The Island”, as the settlement was only really attached to the North by a small strip of land at Narrow Neck – Te Kiritai, skin of the sea.

For the next 10 years, the area was mainly occupied by a small group of families associated with the naval stores and ammunition depot, who lived on land in front of where Elizabeth House in Devonport now stands.

The area was also an anchorage for visiting naval vessels and the boat landing area was called ‘Sandspit’ due to the long spit that still extends out from the foreshore along King Edward Parade towards Maungauika – North Head and the Navy Museum.

A signal station established on the summit of Takarunga – Mt Victoria gave the name ‘Flagstaff’ to the area. By the 1850s the land around Flagstaff was being subdivided and was bought up by a number of early settlers.

The Alison, Duder, Burgess, Wynyard and Oliver families were to play a major role in the development of the area, and are remembered in street names.

Much of the area was designated as ‘suburban farms’. It was J. Hammond that purchased the area of Maungauika – North Head on which Jubilee Avenue now stands.

The rest of North Head had been designated Defence Reserve. Hammond also had an area at the base of the beach which the Navy Yacht Club later occupied.

The centre of the bay was basically the front of the swamp that extended back to where Tainui Road now runs. This area was later to be reclaimed as Devonport Domain. Alex Alison, the second Mayor of the Borough owned the area from Cambridge Terrace through to Mays Street.

The area along the beach on the face of the swamp and down past Wynyard’s property, was used as a ballast dumping area for rocks and other material, used as ballast by early vessels. This unwanted material helped build up the foreshore and the rise created can still be seen today.

Some of this material ended up located under the houses that were eventually built along this area. The most important finds have been from the front of the old Alison Estate. Several properties were built there by E.W. Alison for his children. One of these was built for his daughter Alison (Toots) after she married. It was under this house and the ones nearby that pottery grave markers have been found. A number relating to a particular person has been cast into the top of the peg like marker. These were used as markers on a grave site before the head stone was put into place. How these ended up under the house remains a mystery.

The bay was now used as part of pilot operations for the growing town of Auckland. The pilots could read the signals from the flag-staff and know what type of ship was arriving by way of Tiritiri Matangi and what she was carrying; immigrants, supplies etc. It would depend on the wind and tides as to when the ship could be sailed into harbour. If the conditions weren’t favourable it could be several days before the ship was able to sail into the shelter of the Waitematā. The pilots were private operators and would row out to the ships and barter with the captain to guide them in. Presumably, if you were unsuccessful you had a long row back home.

The sheds for the boats were there for many years and the concrete base and piles of the ramps can still be seen on the foreshore.

The next activity to establish itself in Pilot Bay was shipbuilding. In 1858, George Beddoes opened a shipbuilding yard under the cliffs on the eastern side of the bay, launching his first vessel a year later in 1959.

He was later joined by John and James Holmes, who sometime later formed their own yard and established the ferry service. Mr Beddoes constructed a large shed for his shipbuilding operation which stood as a landmark in the bay for many years, even though Beddoes had moved his yard to where the Devonport Yacht Club now has its premises.

The Pilot Bay yard was so cramped that boats had to be launched sideways down the slipway he had built. When Beddoes finally left Devonport to live in Fiji (1876), his foreman Charles Bailey set up his own shipbuilding business extending the Pilot Bay premises into where the Navy were later to establish their base at the end of King Edward Parade. He also established a yard in Auckland.

Bailey built some of the fastest and most gracious sailing boats in Auckland. When he left Pilot Bay for a brief period another yard owned by a Mr Stone used the premises. Shipbuilding and farming were the major activities in the fast growing area by this time now named, Devonport.

The New Zealand Timber Company established a yard on the west side of the bay, using the area to hold Kauri logs floated in from Great Barrier Island and Thames. The large chimney associated with this yard was a local land mark until it was removed after the mill burnt down in 1887.

Meanwhile, Maungauika – North Head was developed as a fort for the defence of the City of Auckland. This construction removed the remnants of the Māori Pa and fortifications on the maunga. The fort would eventually have a major effect on the future use of the bay.

Mr Hammond the original owner of the land above the bay, not designated for defence purposes, sold a section of the land to shipbuilder, George Beddoes. Mr Beddoes built a large house on the edge of the cliff above his ship yard. He later sold it to William Lee Rees, who built a salt water pool for his children on the water’s edge below the house. Rees then sold the land and house to A.R.D. Watson.

In 1915, Alexander Watson offered the house to the Auckland Hospital and Charitable Aid Board for use as a convalescent home for returning and wounded soldiers. Remnants of the salt water pool, also used by the convalescent patients, can still be seen to the North of the Navy Museum Boatshed. The Watson house remained a prominent feature of the area until it was destroyed by fire in the 1930s.

Towards the end of the 1880s, the foreshore had become so cluttered with yards and timber companies that in February 1898, the Borough Council passed a resolution requiring removal of all waterfront buildings from Stanley Bay to Maungauika – North Head. This signalled the beginning of a new level of construction and activity in Pilot Bay, and the eventual change of name to Torpedo Bay, referencing the Torpedo Mining Station situated on the edge of the bay.

This article was originally published in the White Ensign, issue 06