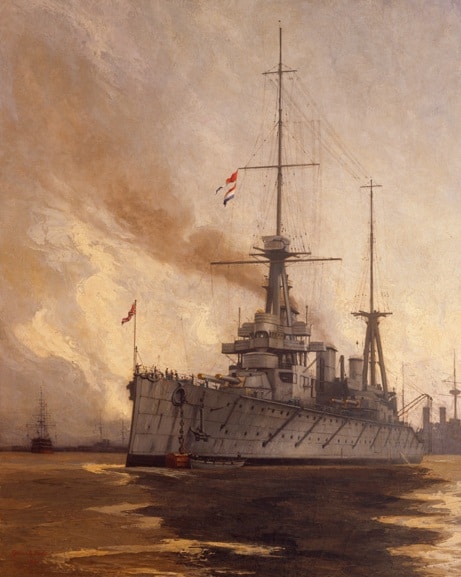 In 1913, upon the first visit to New Zealand by HMS New Zealand, there were medallions struck to commemorate the visit:

An unmounted medal that was awarded by the Citizens of Auckland to the officers and crew of HMS New Zealand during the battleship’s visit to Auckland 29th April-10 May 1913.[1] Size 35.5mm and struck sterling silver and issued unnamed.

Obverse: A representation of HMS New Zealand with the wording ‘To the Officers and Crew of H.M.S New Zealand 1913”.

Reverse: The coat of arms for the Dominion of New Zealand[2]

These were also issued in 1913 to commemorate the visit. They were produced in gilded and plain copper versions. This was presumably for civilians as opposed to the formal medal issued to the crew.

Reverse: To commemorate the visit of New Zealand’s gift battleship.

Reverse: To celebrate the visit of New Zealand’s gift battleship to the Empire.

The museum holds in its collection both of these medals.

During the First World War another medal was issued for the vessel:

This medal was struck by Spinks and Son, the obverse design is attributed to Prince Louis of Battenberg. The medal was disturbed to crew of HMS New Zealand in a blue box with gold lettering on the lid with the name HMS NEW ZEALAND AND XMAS 1916. Probable silver version of this medal issued to the Officers. Size 45mm struck in white metal.