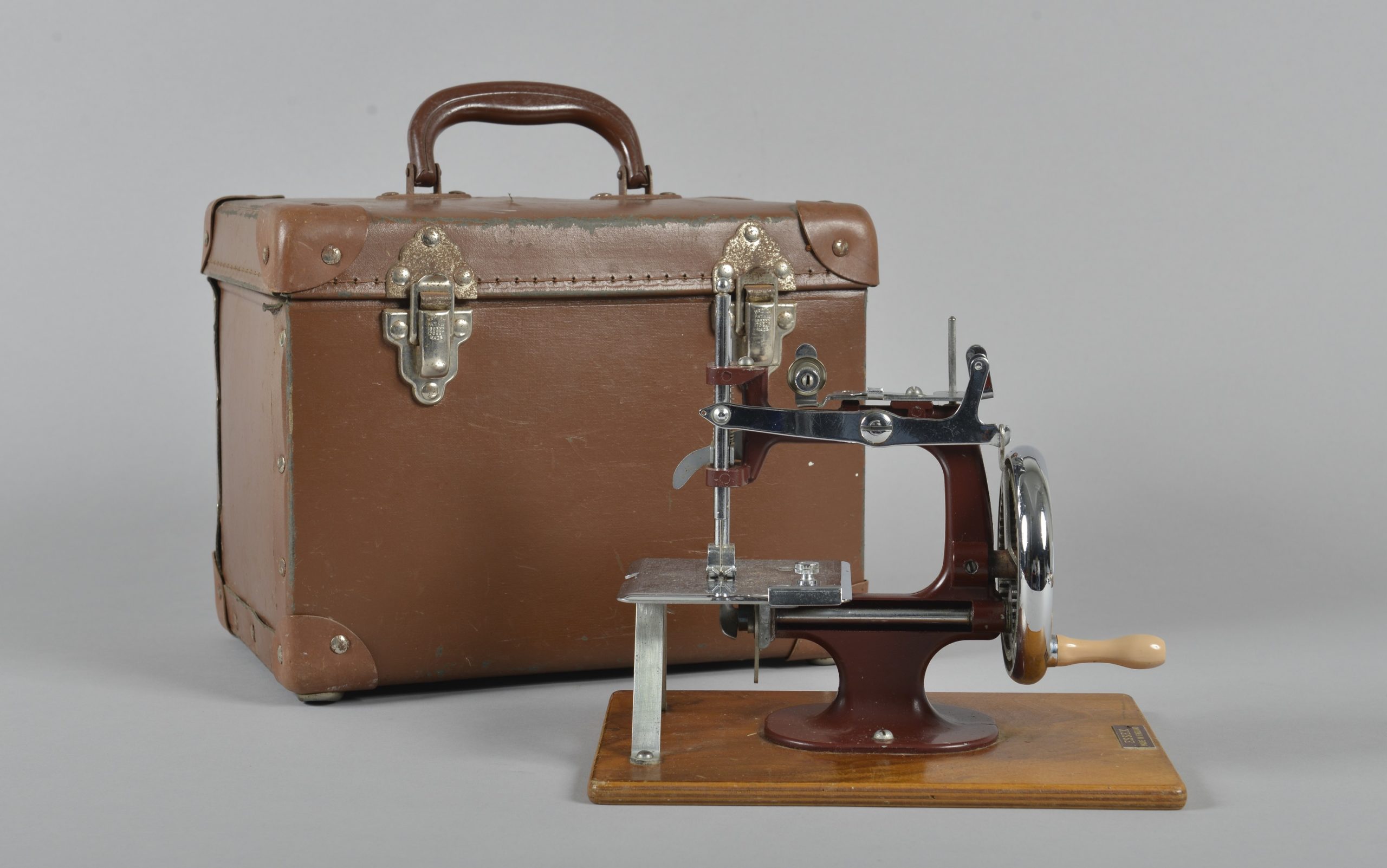 Reference no. 2017.236.1 i
Essex miniature sewing machine and attachѐ case.

The expression make and mend derives from the early years of the Royal Navy when commanding officers began to set aside one afternoon a week for the ships’ company to repair their uniforms.  These days were also used for recreational purposes and, because of this, they could also be approved to occur the day after a particularly arduous night’s work or because of a special occasion.

Until recent decades sailors usually had their clothing made by other sailors, either on board or ashore.  Every ship had men skilled in the use of sewing machines, available to make you a new uniform or repair your old one for a price.

Today, the availability of ready-made clothing, shorter service time at sea and a professional seamstress on base has seen to the demise of on board tailors.  Make and mend is no longer expected to be used for uniform making or mending. Instead it is now an expression used by the RNZN to describe an afternoon off work in recognition of significant events, such as Easter or Christmas.

The first is the Essex Miniature Sewing Machine, MK1.  In response to a shortage in sewing machines after World War Two, the Essex Engineering Works began production on this series in 1946; around 150,000 were sold between 1946 and 1956.  Our machine is believed to have been used on HMS Achilles between 1946 and 1948.

This artefact comes complete with flatbed attachment and bench clamp – all perfectly presented in its original attaché case.  Considering its age, our machine is in very good condition and still in working order.

Our second featured artefact is a hand-cranked blind stitch sewing machine mounted on a wooden plinth.  This was used for many years by Cliff Gubb, ex RNZN tailor, for making and repairing uniforms.

Unlike the Essex machine, this one was not in good condition when the Museum acquired it.

While physically solid and in working order, it was covered with years of accumulated oil and dust.

Now though, the metal components have been carefully cleaned with ethanol and finished with a removable layer of microcrystalline wax.

Our final machine is, for the time being, frustratingly out of reach …

In 2010 our collection store was moved.

Anything on pallets was carefully stacked on shelving units.

As with most museum storage, space is at a premium, and subsequently, large items of furniture were stacked in the aisles between shelving units.

So until such time as the Collections Team has a spare month to play Tetris with the pallet lifter, our third sewing machine will have to wait patiently for its photo shoot.