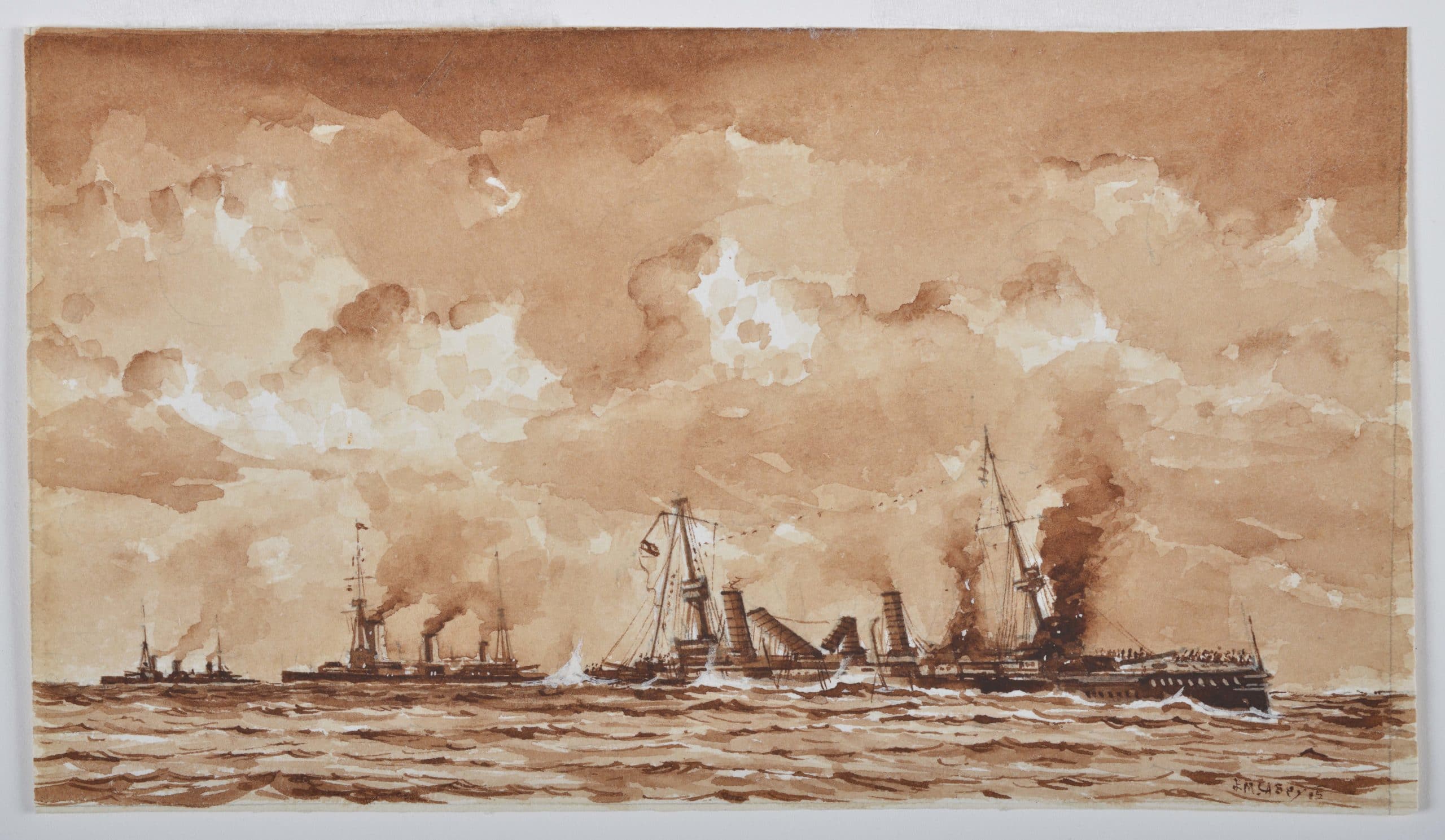 This watercolour from our collection depicts the Battle of the Falkland Islands which took place on 8 December 1914. During the previous month, the British Royal Navy had suffered its worst naval defeat in the last 100 years to the Imperial German Navy at the Battle of Coronel. In retaliation, the Royal Navy sent a force of cruisers to track down the German ships. The German Navy had planned an attack to raid the British supply base at Stanley in the Falklands Islands, but unknown to them, the British fleet had arrived in port the day before. It was a bright and sunny day with excellent visibility so the German cruisers were detected early before they reached the port. Once spotted, the faster and more powerful British fleet pursued the German ships. Even though, the German fleet sailed away at full speed, they were no match for the British cruisers. Once it became clear they could not outrun the British fleet, the Admiral of the German fleet, Graf Maximilian von Spee commanded his two armoured cruisers, SMS Scharnhorst and Gneisenau to turn and fight, allowing his three light cruisers SMS Nürnberg, Dresden and Leipzig, to have a chance to flee. However, Dresden was the only ship to escape and the rest were sunk with few survivors. The battle is commemorated every year on its anniversary as a public holiday in the Falkland Islands.

The artist of this work is Corporal Ernest Casey. It is an imaginative depiction of the sinking of the German fleet as Casey was not present at the battle or even in the Navy, he instead served in Egypt and on the Western Front with the Canterbury Infantry Regiment. He was known as a gifted young artist with a passion for meticulous watercolours of marine shipping and naval battles. He was exhibited at the New Zealand Academy of Fine Arts. Casey gifted some of his watercolours to his sweetheart Jessie Salmon when he went off to war in 1915. Casey and Salmon worked together at the Department of Labour. Records show that Casey contracted pneumonia in Egypt in April 1916 and never seemed to fully recover. Casey was declared medically unfit in 1918 and returned to New Zealand, where he died at St Patrick College’s emergency hospital during the 1918 influenza epidemic. Salmon bequeathed Casey’s collection of watercolours to her sons who eventually donated it to the museum.