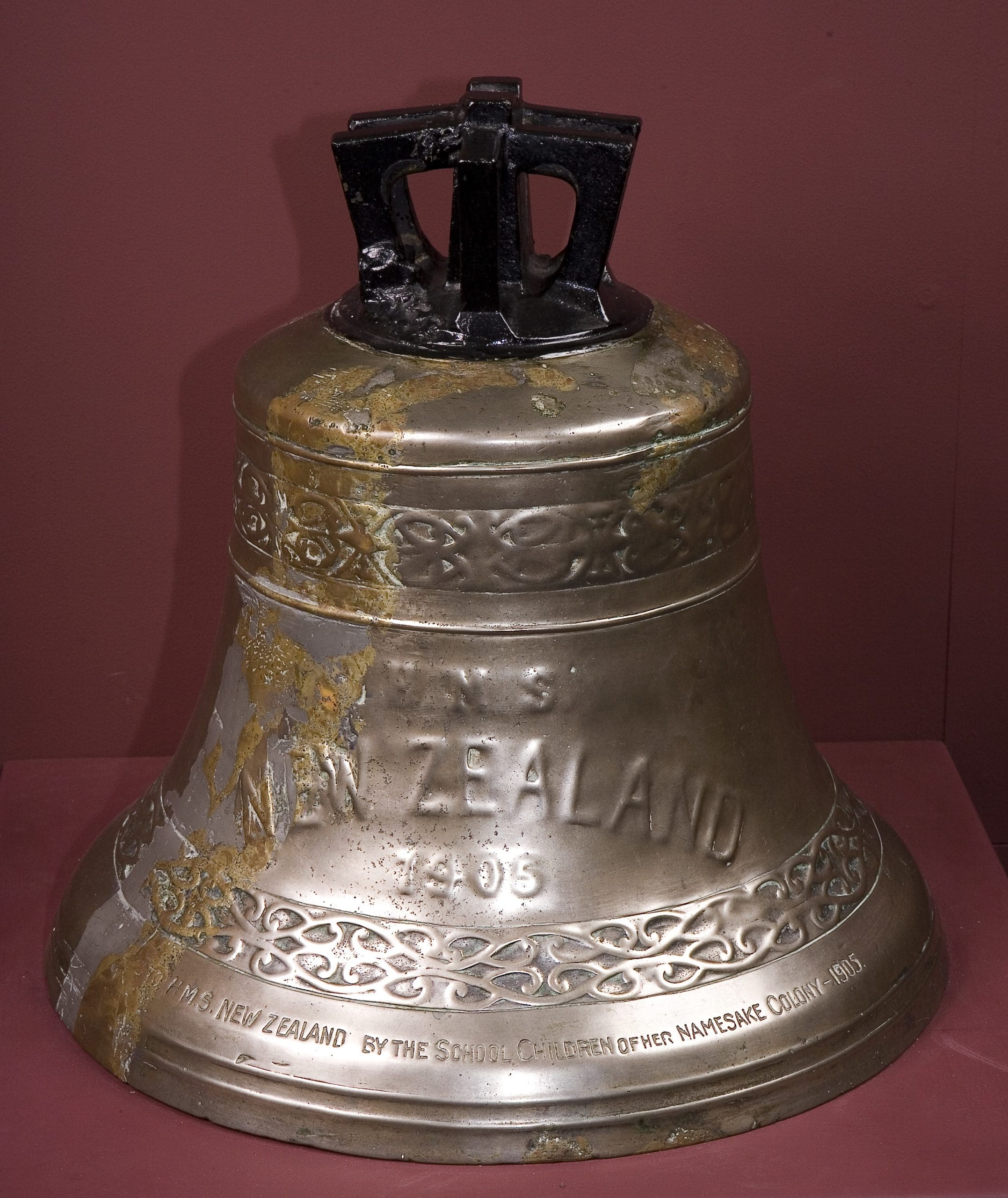 The HMS New Zealand ship’s bell is a fine icon of New Zealand generosity and loyalty to the British Empire.   When the bell was gifted to the original HMS New Zealand in 1905, there were fewer than one million people living in New Zealand.   Everyone was encouraged to give a little in support of the ship that bore the country’s name.  Penny trails were run in schools countrywide.  It is said that the pennies from these trails were melted down to create the Māori warrior head from which the bell hung.

It is a long-standing tradition for both Royal Navy and Royal New Zealand Navy ships to carry a bell onboard, though the use of these bells has varied through the years.  Before the invention of the chronometer, the bell was used for timekeeping: it was rung to mark each half-hour measured by a half-hour glass.  It was used to signal the ship’s presence in low-visibility or fog.  It would also be rung as an alarm in the case of an emergency.

Bells carrying the name of their ship are still used in ceremonies such as announcing the presence of important people.  The British tradition of baptism in a ship’s bell is also still in practice by the Royal New Zealand Navy.  After the baptism, the child’s name is engraved on the inside of the bell.  Though ship’s bells have since been replaced with more modern devices, there is no technology that replaces their rich symbolism. For example, the bell from HMNZS Otago in the museum’s collection has names of children that have been baptised engraved on the inside.

In 1909, Prime Minister Sir Joseph Ward pledged New Zealand’s loyalty to the Crown by offering to purchase a battle cruiser for the Royal Navy.  This ship, which was given the name HMS New Zealand, was loaded with the same armament as the Dreadnought class battleships, but was quicker and more nimble.  The old HMS New Zealand was renamed HMS Zealandia and handed over with her name, the ship’s bell.  The new New Zealand was to become known as a lucky ship, surviving the three major naval battles in the North Sea during the First World War with only one hit and no loss of crew.

The bell was originally gifted to the King Edward-class battleship HMS New Zealand in 1905. The school children of the colony were encouraged to raise funds towards the new battleship in the name of New Zealand. Accordingly, school started penny trials around the nation as a symbol of support and taking part in the ship belonging to all people of the colony. When the funds were gathered, it is said that the pennies were melted down and added to the metal used to cast the bell. When the battlecruiser HMS New Zealand was commissioned in 1912, the bell was transferred over to the new warship from the now renamed HMS Zealandia. One of the features of the bell was the Maori warrior holding the bell through a bit between his teeth.

HMS New Zealand came to New Zealand two times, both times drawing great crowds of visitors.  When she came in 1913, nearly half the people in the country went aboard her as the ship visited the major ports. All were keen to see the potent warship that had been paid for by the Dominion.  She returned in 1919, and again much of the country went to see her.  She was the lucky ship that had fought mightily in the war.  New Zealand was her namesake and benefactor.  Visitors who went aboard the ship could see the bell hung in a prominent place. Due to the restrictions of the Washington Treaty which limited the size of naval fleets the major powers could operate, HMS New Zealand was decommissioned from service with the Royal Navy and broken up in 1923. The bell and the holder were returned to New Zealand.

Today, the ship’s bell is displayed in the  Navy Museum at Torpedo Bay.  The Maori warrior head is on display in HMNZS Philomel’s wardroom on the Navy base.  These objects continue to tell the history of the Navy and of its connection to the people of New Zealand.