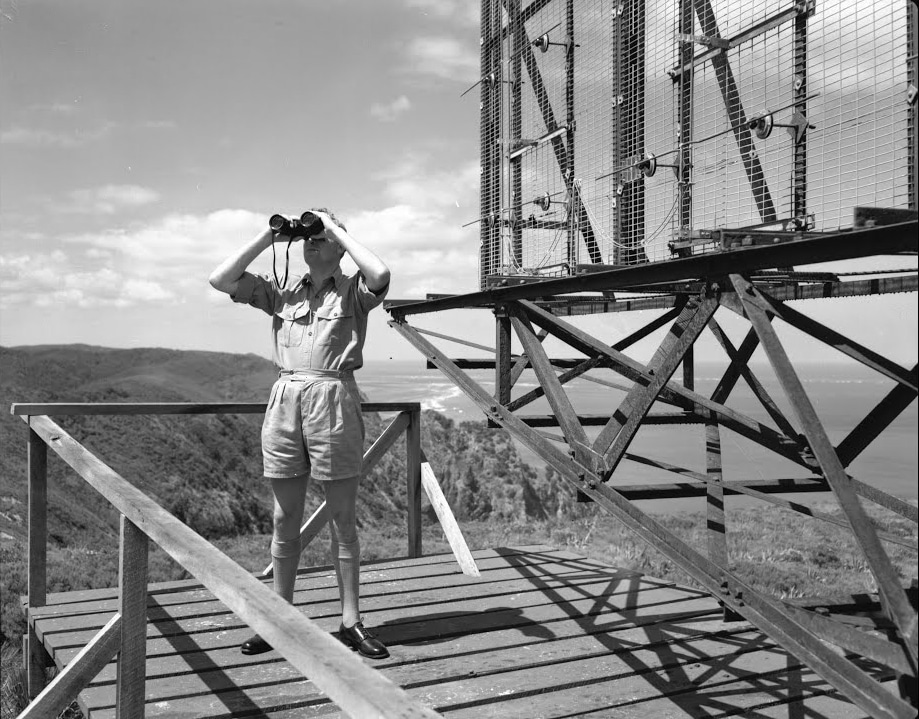 For security purposes the chain of Naval radar stations established along New Zealand coast line from early in 1942, onwards were referred to an ‘Naval posts’.

Whereas Army’s radar installations wore in close proximity to coastal and anti-aircraft batteries guarding the main centres, the sites adopted for Naval stations were chiefly noteworthy, from a constructional point-of- view, for their extremely difficult access.

Four of them were in the elevated portions of outlying islands, and most of the other nine wore on the high parts of inaccessible headlands.

The supply and installation of radar equipment for the three Services was a joint venture involving several Departments.

The Public Works Department’s responsibility covered the design and construction of each station and involved the erection of masts and rotating aerials; the provision of special control gear boxes and electrical generating sets; making arrangements regarding fuel; erecting buildings to accommodate personnel; installing water supply and sewerage facilities; and forming access roading, etc.

Typical of the construction difficulties encountered were those experienced in carrying out radar installations on islands In the Hauraki Gulf.

The biggest obstacle was getting materials from the mainland to the island, landing them on the island, and then hauling them to the site of the work.

To the vicissitudes of tides and weather were added the trials of rough country.

A regular supply of rations had to be obtained for the working parties, and the men generally kept as contented as reasonably possible in the face of trying conditions and prolonged absences from home.

Trips were mostly at night, across minefields in order to start unloading at daybreak, otherwise the morning breeze from the land would quickly work up at rough sea.

Storms wore frequently encountered, while on at least one occasion trips were made through enemy minefields (en route to Cuvier Island) unknown at the time, of course, to the personnel concerned.