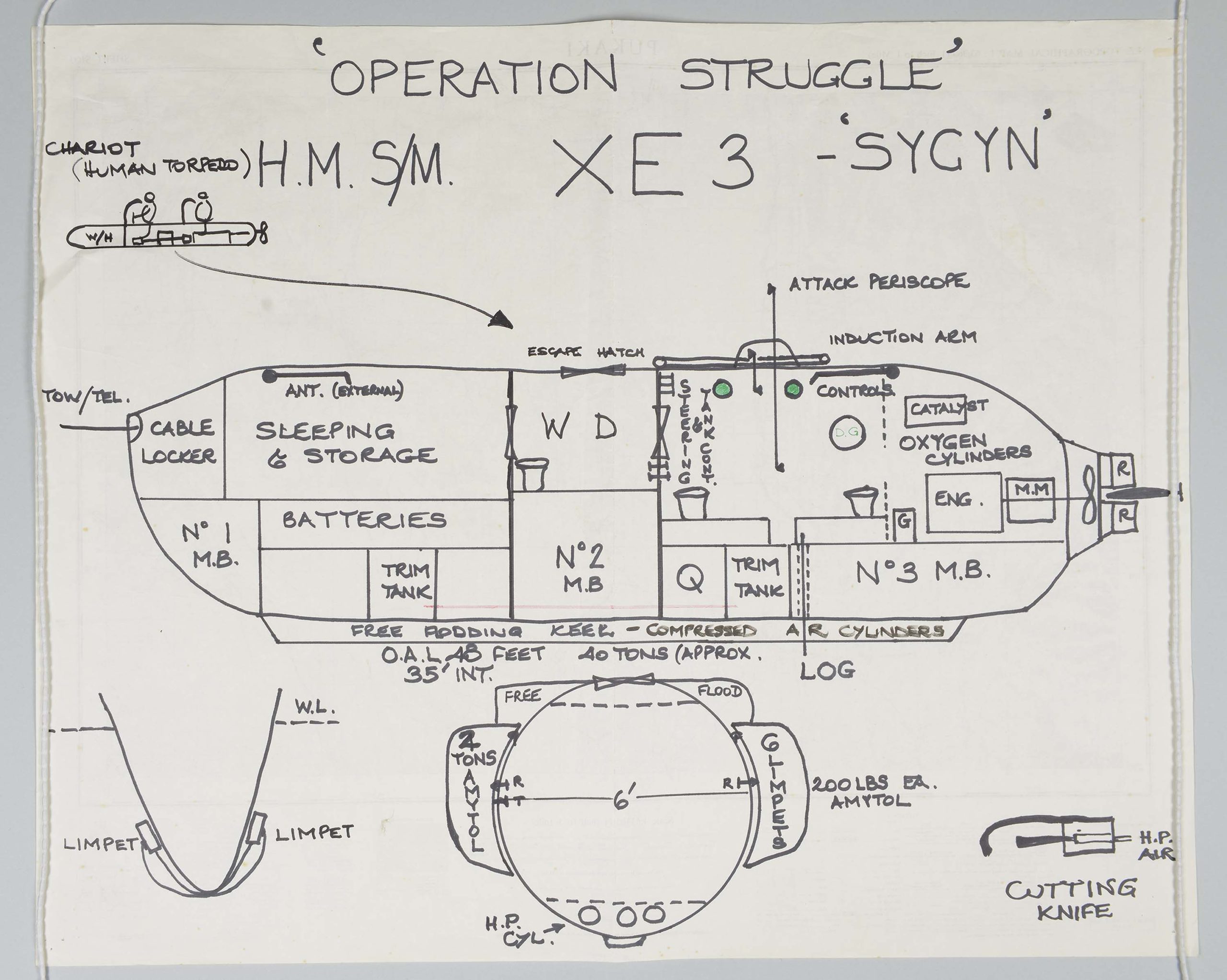 On 31 July 1945, the midget submarine XE3 carried out a successful attack on the Japanese cruiser HIJMS Takao berthed at the naval base in Singapore. At the controls of the submarine was Sub Lt. William ‘Kiwi’ Smith, who was awarded a DSO for his part in Operation Struggle.

Midget submarines are operated by a limited crew – four in the case of the XE-class (including a diver) – and have little or no on-board living accommodation. Smith’s drawing shows the internal layout of the XE3. Its total length was just 16.23m (53.25ft).

During Operation Struggle, the crew was cramped together inside the submarine for over 48 hours. For much of the time they were forced to endure sweltering heat as they did not run the fan for fear of the noise alerting the Japanese to their presence.

The progress of the XE3 during Operation Struggle is marked on this track chart made by Kiwi Smith.

XE-craft were towed to their area of operation by a full-size submarine – in this case, HMS Stygian – with a passage crew onboard.

Smith has marked both the ‘Change Over’ point, where he and his three crewmates took over from the temporary crew on the XE3, and the point where the midget submarine left or ‘slipped’ the Stygian.

Other important milestones are also marked on Smith’s track chart and show the fortuitous nature of the operation. Not long after the submarine stopped the main engine to creep past a listening post, they spotted a ‘Fishing boat’ at around 0300.

Then at 0430 they dived as a large tanker and escorting fishing boat came into view, heading in their direction. By 0800 they had made their way through the Johore Shoal in only 30ft of water and at 0930 they went through the open gate on the boom defence passing near a Japanese guard vessel.

At 1300 they spotted their target, the Takao, and commenced the operation around 1500.

The crew faced several difficulties in laying their explosives: the submarine had to be carefully manoeuvred in and out from beneath the keel of the Takao in shallow water and became stuck on several occasions.

One of the mines failed to detach from the XE3 and the diver had to use a spanner to hammer it loose, and faulty dive equipment released a stream of bubbles to the surface.

Astoundingly however, the submarine was not detected by the Japanese.

At 2100 the XE3 surfaced back outside the Johore Strait ready to head for their rendezvous with HMS Stygian. Soon after the limpet mines exploded blowing a hole in the side of the Takao.

Although it did not sink the vessel, it never sailed again.

‘Kiwi’ Smith’s medals including his Distinguished Service Order are on display at the Navy Museum.

[1] Note that times marked on Smith’s track chart differ from times noted in some other accounts.