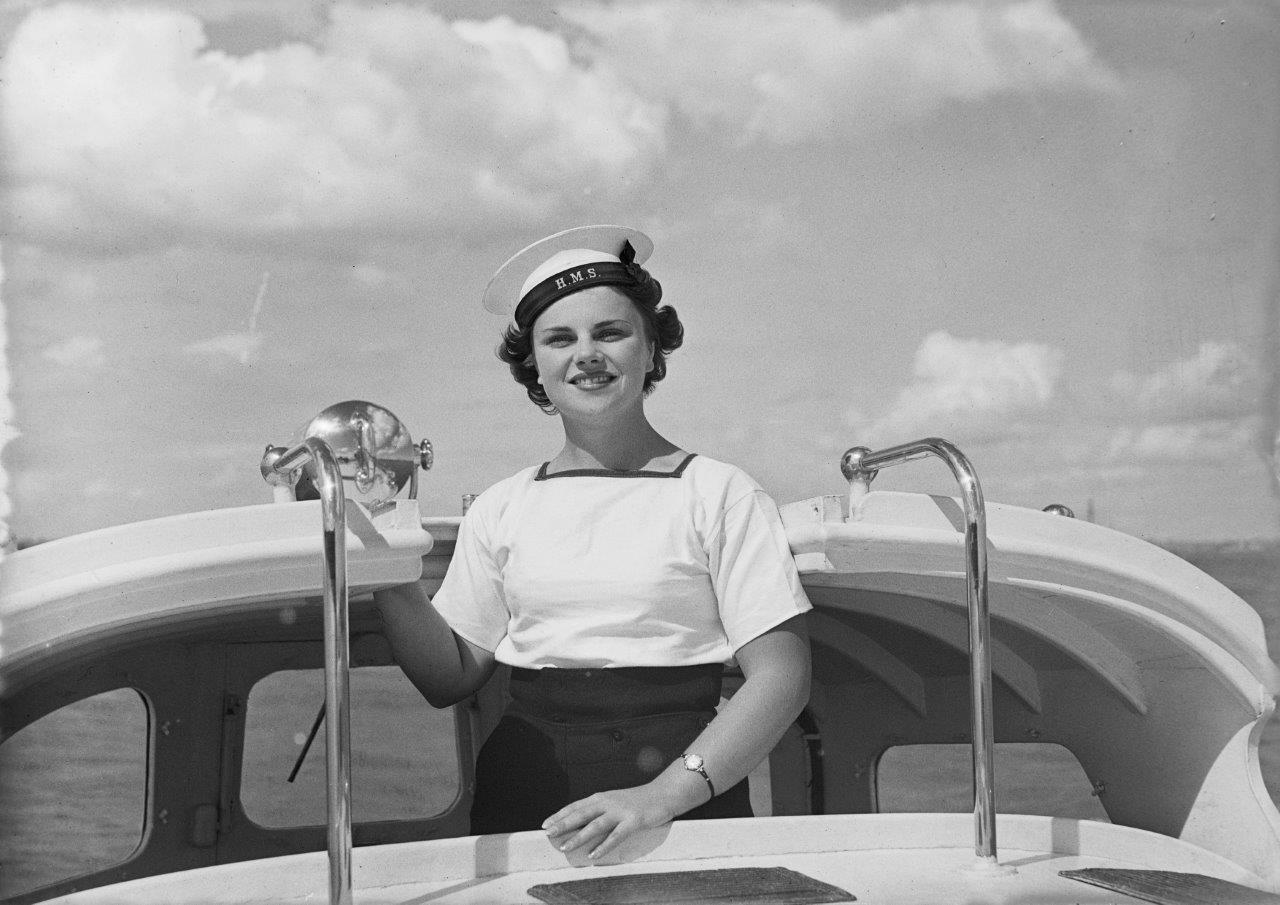 Reference no. 2013.70.682
Coxswain Nancy Hodgson, one of the pioneering Wrens who manned the Admiral's Barge during WW2.

The Women’s Royal New Zealand Naval Service, known as the Wrens, arose from the days of sailing ships.

At this time women were a key part of a ship’s company. They cooked, washed and gave medical care to the men.

In the latter half of World War One, Britain needed more men for combat duties.

This paved the way for women to take over their jobs and to formally serve, behind the front line, in the armed forces.

In November 1917, the Admiralty issued a memorandum establishing the Women’s Royal Naval Service [WRNS]. From their formation they were nicknamed Wrens.

From 1941, civilian women were already taking over positions vacated by men who were going to sea. The Women’s Royal Naval Service (NZ) was established in mid 1942.

Wrens performed the same tasks as they had during the First World War, in addition to roles operating naval motor transport, radar equipment and in the torpedo branch, which was highly skilled, specialised work, etc.

The most urgent naval requirement was in signals. Wrens were trained in various types of communications work, including visual signallers, telegraphists, and telephonists, teleprinter operators and telegraphists.

By August 1945 up to 90 Wrens were serving at the Waiouru Naval Wireless Telegraph Station, which was the major component of the Combined Armed Services Station, communicating with Allied stations all over the world.

The ‘peak’ wartime strength of the Wrens was 519 out of a total of 700 women who served with the RNZN in the war.

The disbandment of the Wrens in 1946, by the RNZN proved to be temporary.

In May 1947, due to the demobilisation of so many men from the navy after the war, it was decided to reform the WRNZS to provide shore-based personnel so that men could be released for sea duty.

The key wartime jobs performed by Wrens were no longer required so they were limited to working as cooks, stewards, writers, signallers, stores assistants, medical or dental assistants, chart correctors and drivers, etc.

In 1961, with changes to technology and job specifications, there were fewer than 50 Wrens as some jobs assigned to the Wrens were eliminated.

By 1967, in order to retain Wrens, women were permitted to stay in the WRNZNS if they married.

The Wrens, as a separate service, came to an end in 1977. NZDF policy was to integrate the separate women’s services and apply equal pay and maternity provisions.

The passing of the Human Rights Commission Act by parliament meant that the RNZN would integrate women, as far as possible, on an equal basis with men and remove any unnecessary discrimination between the sexes.

Those ratings and officers who chose to remain were posted to the RNZN at their equivalent rank or rate.

Up until the 1980’s it was generally assumed that during World War Two, the Wrens had performed naval support roles.

But in late 1982, it became known that for several months, from late 1942, eight specially selected and highly trained Wrens were stationed in total secrecy at a secluded two-story, seven-room farmhouse at the end of a dirt road outside Blenheim.

Their highly specialised and secret work was to monitor, identify and record the sources of Japanese naval signals, twenty-four hours a day, seven days a week.

Read more about women’s service in the RNZN on our timeline.