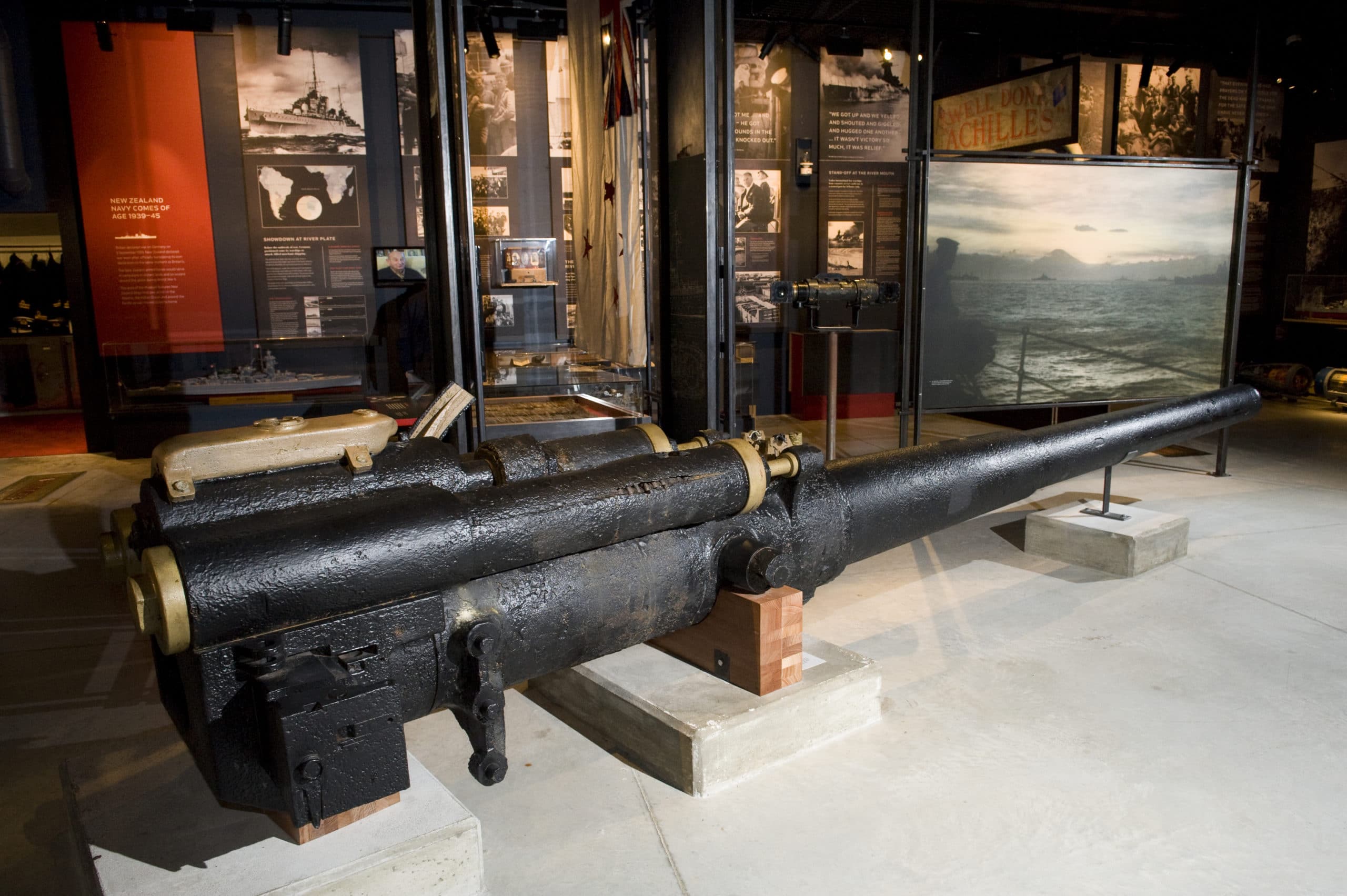 The 5.5″ gun was the first object to be installed in the new Navy Museum at Torpedo Bay. Its large size meant that it had to be installed before the back wall of the gallery and truck dock were built.

This gun came off the Japanese Submarine – I1 – Sunk off Guadalcanal in the early hours of 30 January, 1943 following the actions of New Zealand minesweepers Moa and Kiwi to ram her.

Read about HMNZS Moa and Kiwi’s encounter with the I1 and the heroic efforts of Leading Signalman Campbell Buchanan that night.

These latter included single mounts aboard the Ise and Nagato-class battleships (casemates), the carrier Hosho, the Tatsuta, Kuma, Nagara, and Naka-class light cruisers (in open-backed single turrets), and other smaller vessels.

In addition, the Yubari carried this weapon in both a dual and a single mount, and these dual mounts were also employed aboard the Kashima-class training (later rated as light) cruisers, the seaplane carrier IJN Nisshin, and various minelayers.

It was also widely employed as a coast defence weapon.

Like the rest of the top part of the hull, the gun was painted a flat black, with parts that were used when the gun was in action being gunmetal in colour.

The gun was recovered during a salvage operation in 1969, and offered to the RNZN.

HMNZS Otago was in the Solomons at the time and transported it to New Zealand.

On return to New Zealand the gun was transferred to RNZNAD Kauri Point where it was found to be loaded, with the breech partly open.

The cartridge and shell were removed and the gun was mounted at Kauri Point for many years.

The gun has signs of damage during the action, including a damaged left trunion.

In 1998, it was refurbished by the Ship Repair Unit and transferred to the Navy Museum where it was displayed outside for many years before being refurbished again in 2008.

Following a period of storage it was put on display in the new Navy Museum at Torpedo Bay.

The gun was the first object to be installed in the museum. Its large size meant that it had to be installed before the back wall of the gallery and truck dock were built.