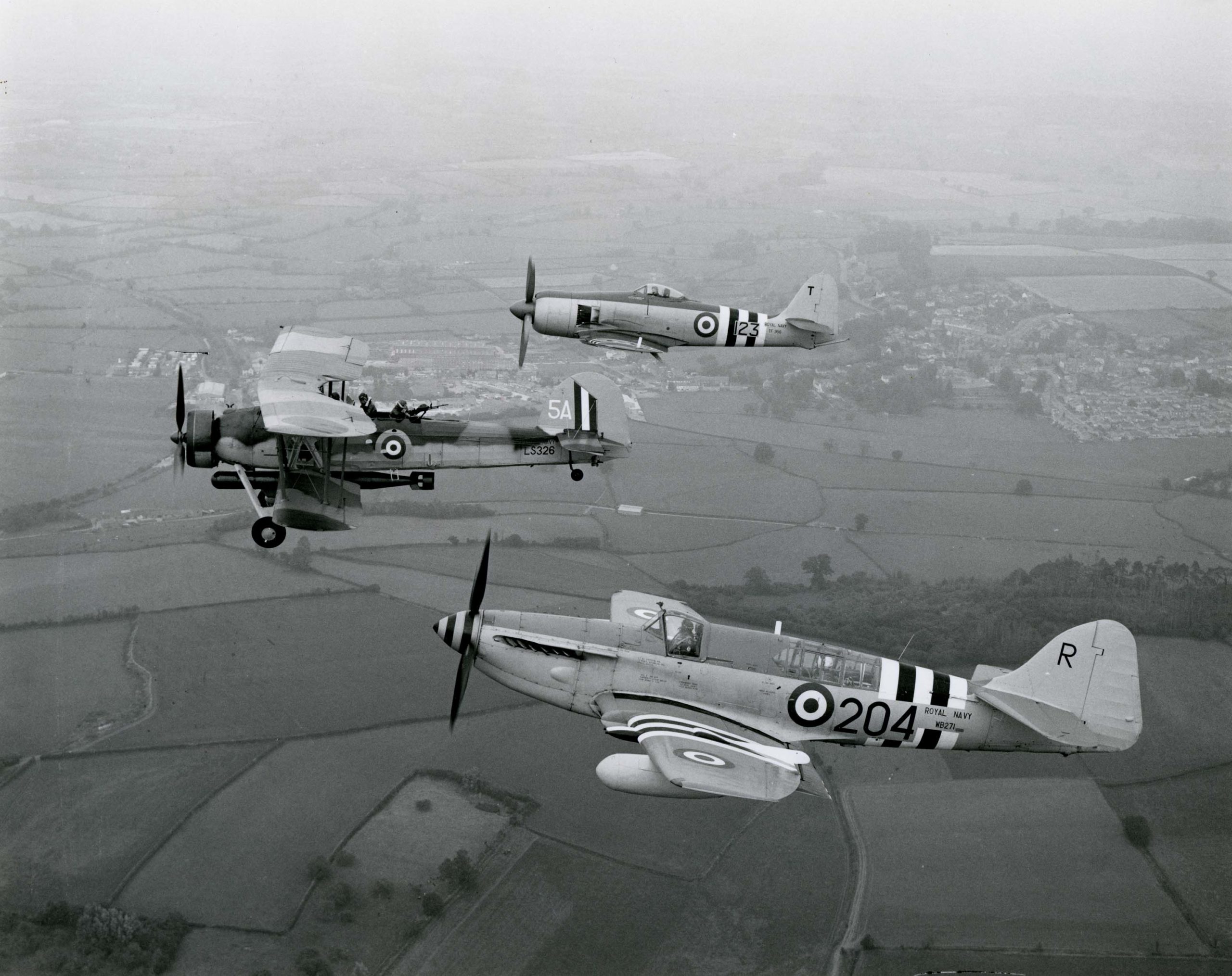 New Zealand’s involvement in naval aviation goes back to before the First World War when New Zealand citizens volunteered to fly as part of the Royal Naval Air Service.

‘Scheme F’  was introduced in World War Two where New Zealanders were recruited to serve with the Fleet Air Arm (FAA).

Many saw service during WW I, several being decorated for gallantry. This close involvement came to a close in April 1918 with the formation of the Royal Air Force, which absorbed both the Royal Flying Corps and the Royal Naval Air Service.

During the 1920s aviation at sea went through a major period of development which saw the advent of aircraft being carried on cruisers.

New Zealand was generally on the periphery of such developments; however, an Avro aircraft of the New Zealand Permanent Air Force, fitted with floats, was embarked on HMS Diomede for the expedition to Samoa in 1928.

The aircraft was simply craned outboard and took off from the water and later recovered by crane. Stowage arrangements left something to be desired and on the return voyage a large weight landed on the aircraft, considerably reducing the space taken up, but also causing major damage.

The commissioning of HMS Achilles into the New Zealand Naval Forces in 1936, saw the arrival of regular naval aviation in New Zealand.

By this time the Royal Navy had a number of pilots and the Walrus aircraft embarked in our cruisers invariably had naval pilots.

The aircraft were from 720 Flight and were launched by catapult and recovered after landing on the sea by being craned inboard.

Achilles and Leander were the only two aircraft carrying cruisers operated by the RNZN. By 1943 the aircraft carrier had come of age and HMS Gambia had her aircraft facilities removed prior to commissioning into the RNZN. Post WW II cruisers were intended to operate as part of a carrier task force and therefore had no requirement for their own aircraft.

The rapid increase in the number of aircraft carriers in the Royal Navy during the Second World War, created a great need for pilots and aircrew.

In 1942, New Zealand was invited to recruit personnel for the Royal Navy to serve in the Fleet Air Arm, under what was called ‘Scheme F’. The initial intake consisted primarily of personnel who had volunteered to join the Air Force, but for whom there was not yet a place.

Some 1066 recruits left New Zealand under this scheme of whom something in the order of 600 served as frontline pilots or aircrew, with a maximum of about 450 in May 1944.

This number formed a significant proportion of the Fleet Air Arm and they saw action in many operations, from the attack on Tirpitz in 1943 to the final attacks on Japan in 1945.

Of the New Zealand personnel who saw service with the Fleet Air Arm, there were many awards for gallantry. Around 155 New Zealanders lost their lives while serving in the Fleet Arm Arm.

By the early 1960s aircraft carriers had become fewer and cost dictated that there would be even less in the future.

At the same time the range of shipborne sonar had outstripped the range of antisubmarine weapons then available.

Accordingly, there was a requirement for a light aircraft for reconnaissance and as an antisubmarine weapon platform.

In the Royal Navy the answer was the WASP helicopter, which came into service in the RNZN with the commissioning of HMNZS Waikato.