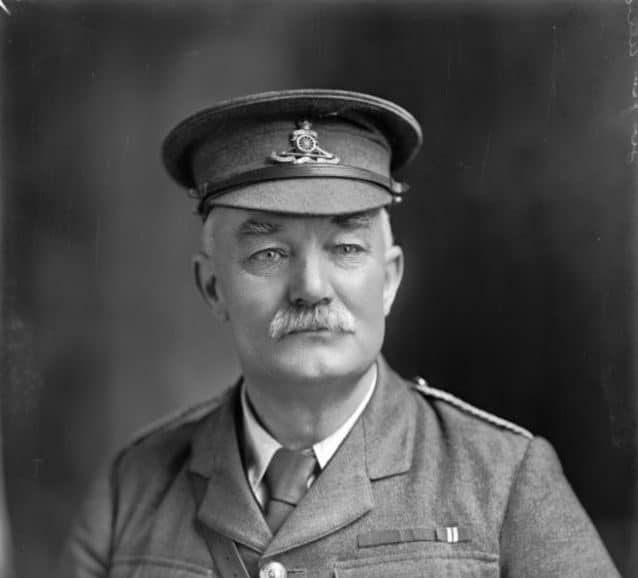 Sir James Allen was the New Zealand Minister of Defence throughout World War One.

Prior to the war he was a member of the Dunedin Naval Artillery Volunteers, of which he was the Commanding Officer in 1891.

A major achievement of his was the passing of the Naval Defence Act in 1913, which led to the creation of the New Zealand Naval Forces.

Born at Adelaide, South Australia, on 10 February 1855, James Allen was the son of James Allen and his wife, Esther Bax. He and his brother were brought up by an uncle at Cockhill, Somersetshire, England, while his widowed father was in Dunedin.

They were orphaned with the death, in 1865, of James Allen senior.

Allen attended Clifton College, Bristol, where he gained a scholarship in natural science. After graduating BA from St John’s College, Cambridge, in 1877, he returned to Dunedin with his wife Mary Jane Hill Richards.

Allen, who had inherited substantial property in Dunedin was a keen sportsman and in 1882 represented Otago at rugby.

In 1884 he returned to England to attend a three-year course at the Normal School of Science and Royal School of Mines in London, in which he excelled. On his return Allen established substantial interests in coal and goldmining.

Although never an outstanding orator, he impressed by his solid dependability, intelligence and practical good sense and he proved an effective parliamentarian.

Allen had a long-standing concern with defence matters. He was an active member of the Volunteer Force and in April 1891, he assumed command of the Dunedin Naval Artillery Volunteers.

He later served on the Otago Divisional Staff and was appointed coast defence commander of the Otago Military District with the rank of colonel. In Parliament he was the opposition’s leading spokesman on defence issues.

Allen also had a deep interest in education. He was appointed the last life member of the Council of the University of Otago in 1887, and later served as vice chancellor and chancellor.

He was well prepared, therefore, to take the portfolios of both defence and education in Massey’s Reform ministry in 1912, but his major responsibility was finance where he sought to bring departmental expenditure under more rigorous control and to alleviate the adverse effects of short-term borrowing overseas.

However, both political necessity and development imperatives demanded the continuation of the Liberal policy.

As Minister of Defence Allen established an effective working relationship with Major General A. J. Godley, the British officer who commanded the New Zealand forces.

He took steps to improve the efficiency of the compulsory military training scheme; encouraged preparations for the possible dispatch of an expeditionary force overseas; sought to develop an aviation capability; and strongly supported close defence ties with Australia.

Following the outbreak of the First World War in August 1914, Allen’s considerable administrative skills were clearly demonstrated as he oversaw the development and maintenance of New Zealand’s war effort, which centred on the expeditionary force dispatched to the Middle East in October 1914.

The rapidity with which this force (as well as a smaller force which captured German Samoa on 29 August 1914) was raised reflected well on Allen’s pre-war approach to defence.

For three extended periods from August 1916, lasting 23 months in all he was acting Prime Minister. Allen was effectively New Zealand’s war leader and had to deal with a succession of industrial and war-related crises.

He was also responsible for war pensions and the rehabilitation of repatriated soldiers. Compounding the strain was the news that his son, John, had been killed while serving at Gallipoli, a campaign that Allen described privately as ‘ill-conceived and mad’.

He drew satisfaction from increasing public recognition, being appointed a KCB in 1917 and his efforts on behalf of the expeditionary force were formally acknowledged by Godley, in 1919.

Allen’s most notable peacetime achievement was the creation of the New Zealand Naval Forces in 1913.

Long convinced that New Zealand must move away from the existing system of subsidies to the Royal Navy, he came to office determined to establish a locally based naval training programme.

After difficult discussions with Winston Churchill during his London visit, Allen secured British agreement to the loan of a training ship, HMS Philomel, and personnel to begin his scheme.

Allen foresaw New Zealand developing a substantial naval unit as part of an imperial force in the Pacific.

On 30 April 1920, Allen sailed for Britain as High Commissioner.

He also represented New Zealand at the League of Nations and in March 1926 he was elected Vice Chairman of the special assembly to consider Germany’s admission to the League.

Although skeptical of the League’s chances of outlawing war, Allen saw value in the better understanding it promoted among nations.

For security he preferred to rely on imperial defence plans based on the power of the Royal Navy.

Allen, who was made a GCMG in 1926, resumed his parliamentary career when he was appointed to the Legislative Council on 1st June 1927, and was an active member until he retired from public life in 1938.

Allen resided at Arana, his house in Dunedin, until his death on 28 July 1942.