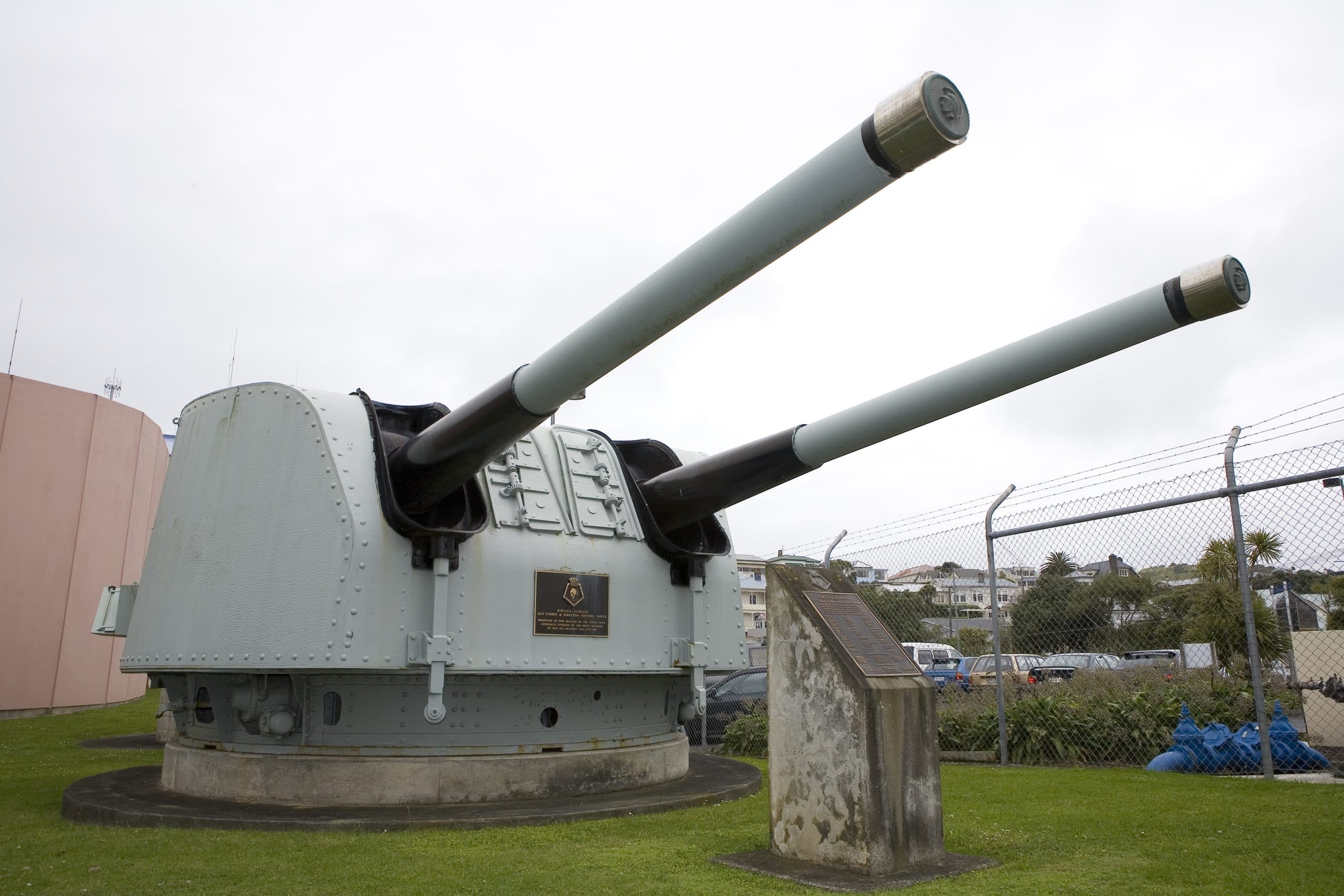 This twin Mk. 21 6-inch turret is the ‘Y’ turret from HMS/HMNZS Achilles and was the aft turret when she went into action at the Battle of the River Plate on 13 December 1939.

When INS Delhi was decommissioned the turret was offered to New Zealand as a memorial to the men who had fought in her during Achilles service with the Royal New Zealand Navy.

In 1993, work was began on the concrete foundations for the turret and director control tower to be placed at the main entrance to HMNZS Philomel.

When combined with her sister ship HMS Ajax and HMS Exeter, the three vessels could fire a broadside of 1.4 tonnes vs. the Graf Spee’s two tonnes.

The Officer of the turret was Lieutenant W. Moresby who was also the Quarterdeck Divisional Officer.

Situated with it was, in Officer’s territory, the turret was always a showpiece for cleanliness and neatness both inside and out.

In peacetime it was always kept painted with enamel as against the other turrets ‘50/50’ paint.

Once Achilles was on a war footing; constant daily gun drill practice was undertaken under the direction of the Gunnery Officer, turret PO or Gunners mates.

The constant gun drill produced highly trained gun crews who were able to open fire at the high rate of ten broadsides a minute at the beginning of an engagement as happened in the opening phase of the River Plate action.

This was a very high rate of fire for hand rammed gun and of course could not be kept up for very long, however after the initial few minutes of firing good gun crews could settle back to a steady six rounds per minute.

For example, B-turret fired 173 rounds during the battle or five rounds a minute.

Fast firing can of course bring its problems, apart from running out of ammunition too quickly.

After firing about 80 to 100 rounds, the guns tend to heat up to such an extent that the run out springs do not return the guns to the firing position after recoil without some manual assistance from the gun crews.

The guns barrels would also be blistered by the firing ruining the nice paintwork that some poor sailor had done!

The turret sits at the entrance to the Devonport Naval Base, HMNZS Philomel and is a memorial to all those men who proudly served in Achilles, and to honour those men who gave their lives serving under the New Zealand flag.