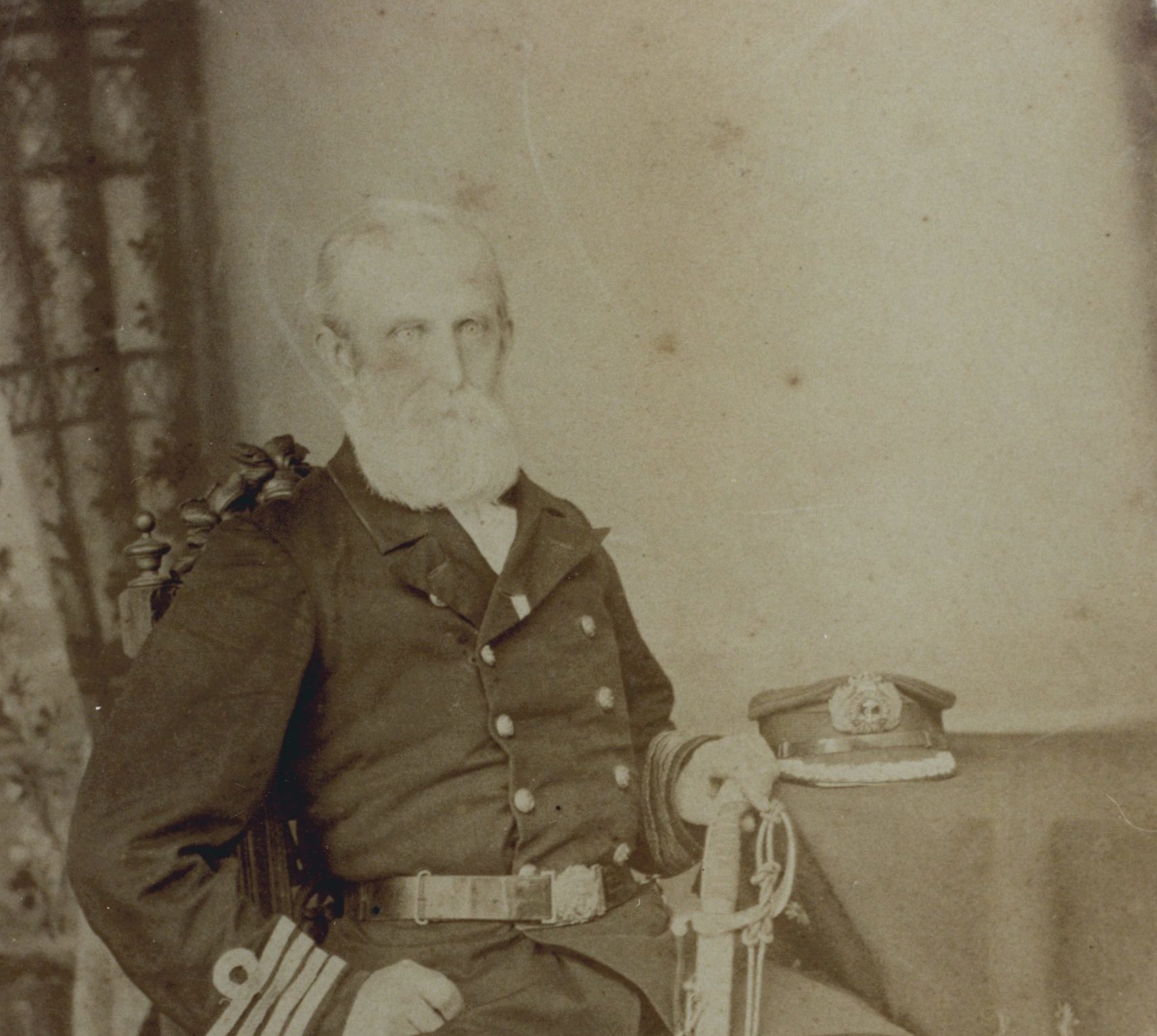 Emilius Le Roy of the N.Z. Volunteers was one of the oldest and best known Volunteer Officers in the Auckland District. He was connected with the volunteer movement for more than forty years. Mr. Le Roy was born in the Island of Guernsey in 1827, and there served his apprenticeship to the sailmaking trade. After spending 12 months in London he adopted a seafaring life, and eventually became the master of the trading vessel Flio Mama, trading between Sydney and Auckland. He arrived in Auckland in the 1850s to take up residence.

Commandant Le Roy’s career as a Volunteer dates back to 1857, when he was one of the promoters of the Auckland City Rifles.

He started from the bottom run of the ladder and proved in his own experience that promotion came remarkably slowly in those early days.

In 1863, he was serving with the Auckland Volunteer Rifles as an Ensign in No. 6 Company and was promoted to Lieutenant in August that year.

Le Roy saw service in the Waikato War of 1863-1864 along with other militia and volunteer forces supporting the regular infantry and naval brigades of General Cameron.

On the disbanding of the City Rifles in 1868, he was transferred to the newly formed Naval Brigade in January, and again started as a private.

Based on his prior experience as a sergeant in the City Rifles he was promoted in 1868 to the rank of ensign and in August was elected to the rank of Lieutenant, but not without some controversy. He was a passionate supporter of temperance and started a society aboard the warship HMS Brisk when it was serving in New Zealand waters. This hardly endeared him to his fellow officers or ratings.

On the death of Captain Gilding, he was appointed to the vacant rank on 28 April 1871 which he continued to hold until 1889. Immediately after the “Russian Scare” of the early eighties, Captain–Commandant Le Roy held command of the six corps forming the Auckland Naval Division.

The Colonial Government then introduced new regulations that covered the volunteer forces in operation in 1889.

With the enactment of this change, Le Roy, though much against his will, had no other option that to accept his service was at an end and was allowed to retain his rank when placed on the retired list, having the distinction of being the senior commandant in the colony.

He was awarded the Colonial Auxiliary Forces Decoration and the New Zealand Long and Efficient Service Medal.

The Le Roy Sword in the Museum’s Collection

The sword is of a solid half-basket hilt design. The flap that holds the sword in the scabbard was introduced about 1880.

This would indicate that the sword was made at some time from c1846-1880 and had this hold drilled at some time after 1880.

The straight blade for the Le Roy sword is described as a Claymore and was popular in the 1870s and 1880s. This fits in with the Le Roy timeline.

The sword has two holes in the hilt which were used to secure the sword knot and also on both the Lion’s mane extends to the bottom of the handle which was a later change to the pattern of this type of sword.

On the Le Roy sword next to the fouled anchor device are the initials RNAV. This stands for Royal Naval Artillery Volunteers which in Le Roy’s case is appropriate given his involvement.

An example in the National Maritime Museum in the UK has the same fouled anchor and crown with RNAV dating it to the 1870s-1880s.

The proof marking I believe to be that of sword makers Gillott and Hasell, New Burlington c1868-1901.