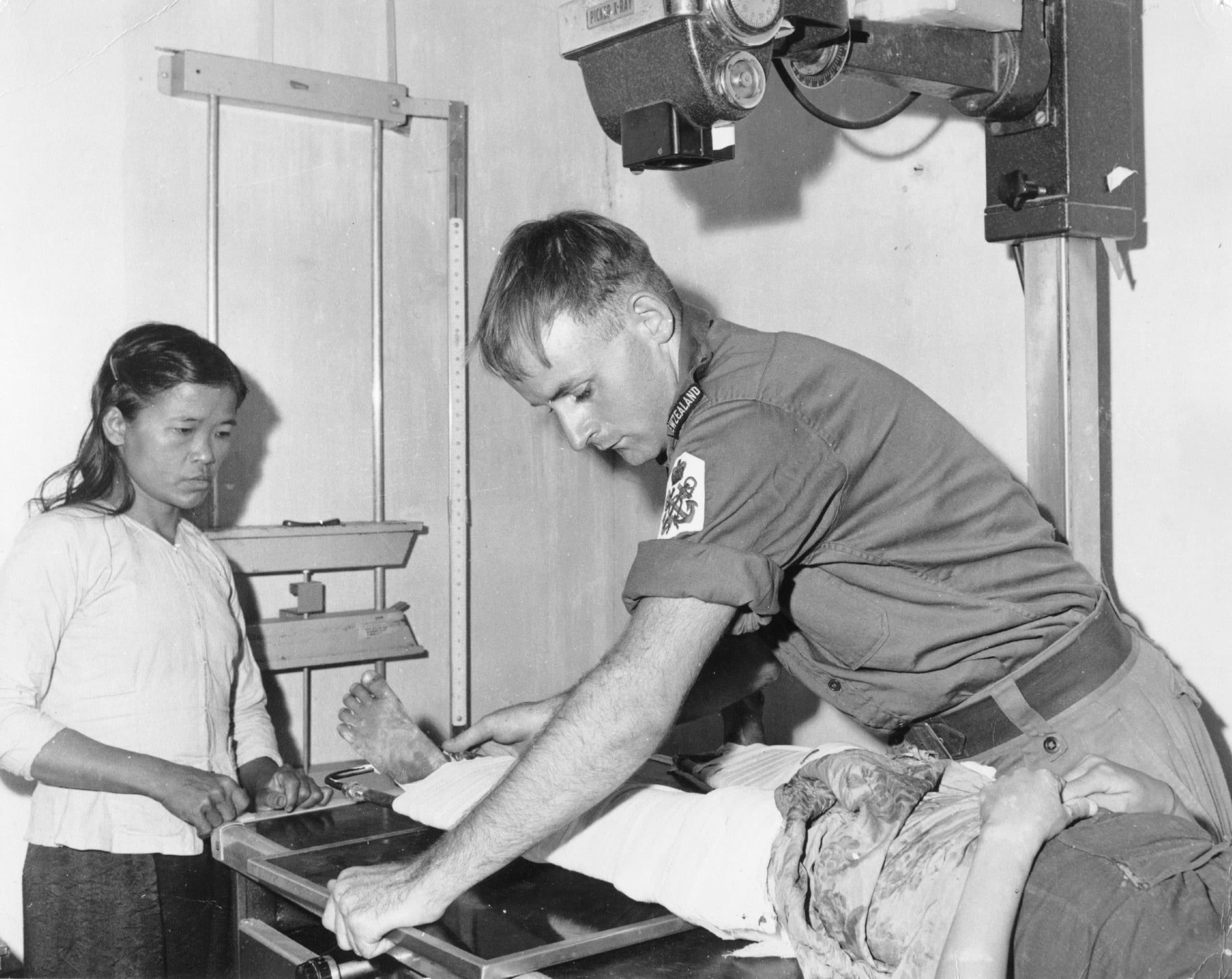 The Vietnam War ran from the early 1960s until 1975. From 1964-1973, New Zealanders were deployed in to South Vietnam, with a combat force in action from 1965 – 1971. In addition to the Army units, a joint service New Zealand Services’ Medical Team was deployed to provide civilian aid as a Military Public Health Programme to the town of Bong Son in Binh Dinh province from May 1967 – December 1971.

New Zealand Defence Force personnel were based in Vietnam from June 1964 to December 1972. At the peak of New Zealand’s involvement, 543 service people were there. A total of 3890 served, with 37 killed and 187 wounded. All those who served were regulars or had enlisted in the Regular Force to join V force, or New Zealand’s army contingent in the US-led coalition. New Zealanders served in several different locations in what was then known as South Vietnam.

The first medical team to deploy consisted of three medical officers, eight medics, a laboratory technician and two administrative staff – it was commanded by SURG LTCDR A Green RNZN. Under the provisions of the Geneva Convention the Team were armed, for self defence and the protection of their patients.

At first they were based in the Bong Son dispensary, but they soon increased their working area by erecting marquee tents in the dispensary grounds. Their working conditions were described as ‘primitive’, with a ‘shocking lack of hygiene.’ The Team’s living quarters were in a crowded barracks building with the US Army Advisory Team, about two miles away.

There was considerable enemy activity in Binh Dinh province, which was a rich rice growing area and so the regional Viet Cong, bolstered by North Vietnamese regulars, made intensive efforts to take harvested rice. The province was in the II Corps tactical area and the VC sought to intimidate the local population with frequent attacks, blowing up buses and setting ambushes. Thus gunshot wounds and fragment wounds were common amongst the civilians brought to the Kiwi team.

But as well as war wounds – many from American fire – diseases were endemic, including bubonic plague and typhoid. Traffic accidents also caused many orthopaedic injuries – a large part of the Team’s work overall.

The team rotated approximately annually – overall there were 98 personnel involved over the 4½ years of the Team’s deployment: 47 from the NZ Army, 27 from the RNZAF and 24 from the Navy. Tom Neve, then a Medical Petty Officer, points out that “the bulk of the junior servicemen were naval medics, the other Services sending mainly Sergeants and above. But before I left the balance had been somewhat redressed by having a few MPOs on board. However our junior ratings acquitted themselves well, especially with surgical procedures.”

In June 1969 the Team took charge of the Bong Son Impact Hospital, a new 100 bed hospital in the grounds of the old dispensary. The team also moved to a house in the hospital grounds, which they named the Gordon Watt House to remember SGT G S Watt RNZAF of the team who was killed in March 1970 by a mine when visiting the (now demolished) Bong Son cathedral. During the Team’s period in Vietnam there was no direct attack on the hospital, but once a ‘stray’ mortar bomb fell in the grounds. One of the Kiwi Medics was wounded during an attack on a convoy.

MPO Barry Nash recalls: ‘After volunteering for duty with the NZ Services Medical Team, it was decided that I would train as an X-Ray technician which was one of the areas Navy medics had been working in at the Bong Son Hospital. Slim Shannon and I travelled to Vietnam together – given Acting (later, Temporary) MPO rank. On arrival we were advised that the hospital required a storeman/driver and the other to do anaesthetics. Fortunately, a Navy mate (MPO Tom Maguire) suggested that I should do anaesthetics, and from there I started a steep learning curve from a GP Anaesthetist, SQN LDR Max Pearl (an RNZAF Territorial) who was due to return to NZ. For the remainder of my tour I worked in the operating theatre, initially with Tom Maguire and from November 1970 with MCPO Alby Robertson. Both of these highly experienced medics assisted during surgery and at times performed surgery (often major) if a surgeon was unavailable.’

Overall the Team is estimated to have treated 46,000 outpatients each year – some 200,000 overall – while throughout the 2½ years that they ran the hospital the average ‘bed state’ was 92. While running the hospital the team also trained Vietnamese orderlies and nurses, with a Vietnamese doctor working alongside the team full time. This training role enabled the hospital to be handed over the Vietnamese when the team was withdrawn in December 1971.

In February 1972 a Second NZ Army Training Team was set up at Doing Ba Thin, near Cam Ranh Bay, to assist with training Cambodian troops. The 18-strong team included at least two medics; there was one rotation (i.e. 33 personnel deployed in total) and three Navy medics, MCPO C Cameron, MPO JN Luce and LMA WG Clark, were part of this contribution.

The 1st New Zealand Services Medical Team was based at Bong Son in Binh Dinh province from April 1967 until December 1971. It treated civilian casualties of war and accident cases, and helped train Vietnamese nursing staff.

NZSMT was a military surgical team deployed to Qui Nhon Province on 31 March 1967. It was a separate team from the New Zealand Civilian Surgical Team which also operated in Qui Nohn Province under the Colombo Scheme.

RNZN personnel – from the Flinkenberg Rolls: