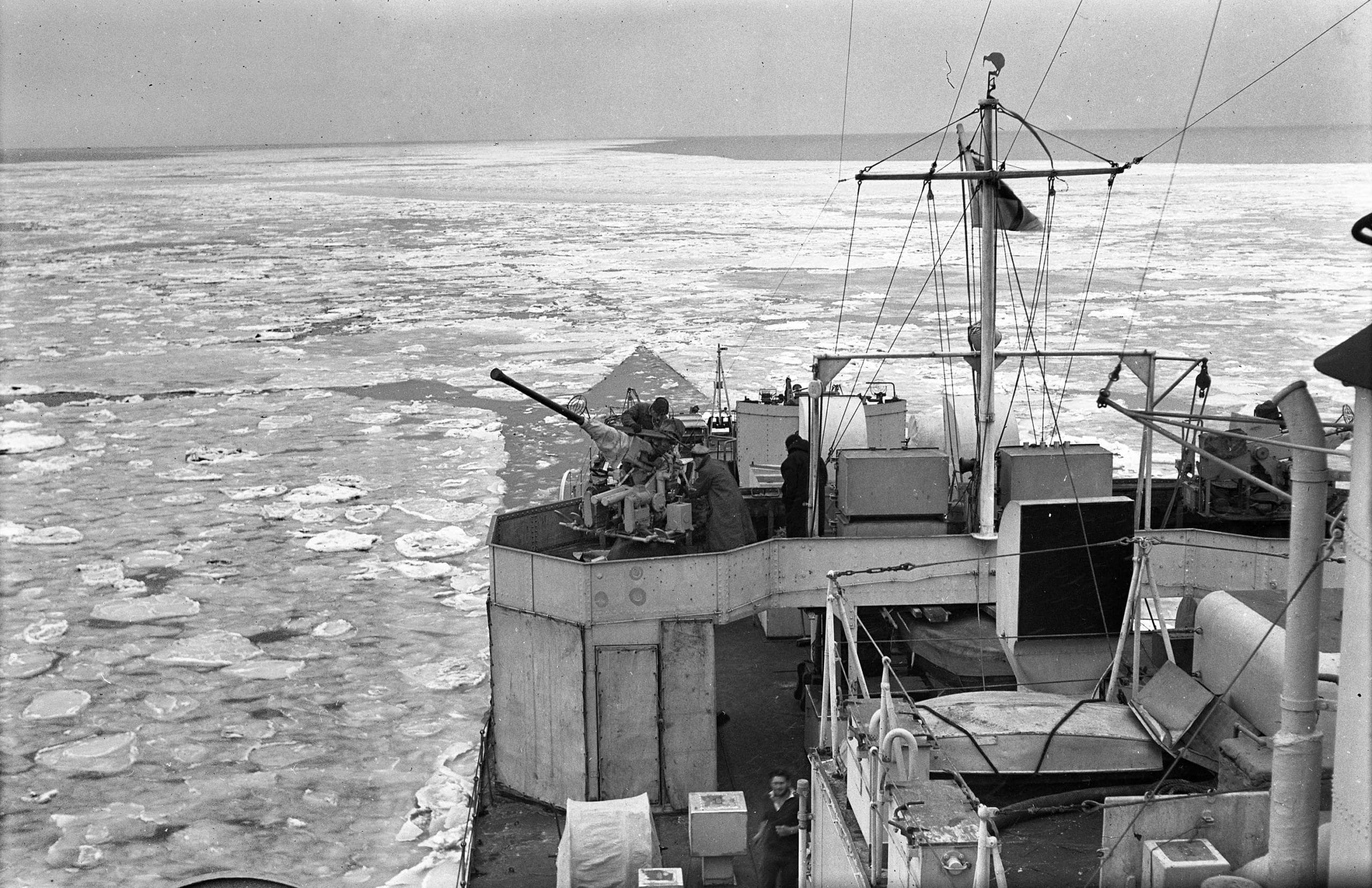 The Korean War was possibly the first link between the Royal New Zealand Navy and Korea.  In June 1950, Stalin give Kim Ill Sung permission to invade the south. Stalin was counting on the UN to not intervene. It was a miscalculation.  He later pushed China into entering the war so that it would tie down the USA in Asia, thereby giving a free hand to the USSR in Europe.

On the 25th of June 1950 communist North Korean forces invaded the democratic South. The United Nations passed a resolution calling for the assistance of all members in stopping the North Korean aggression. New Zealand responded after just three days. On the 3rd of July 1950 frigates HMNZS Tutira and Pukaki left Auckland. The ships arrived in Korean waters on the 27th of July. Upon arrival they were given an escort role, supporting up to four conveys a week. HMNZS Tutira and Pukaki’s task has been described as the most thankless of the sea war – ‘dull, daily routine patrol’. However, this work was of vital importance to the United Nations cause in Korea. The commander of the US Naval Forces, Vice Admiral Joy noted ‘The unspectacular role of carrying personnel and supplies to Korea was perhaps the Navy’s greatest contribution’.

New Zealand’s involvement in the Korean War lasted three years and involved six Loch class frigates HMNZS Pukaki, Tutira, Rotoiti, Taupo, Hawea and Kaniere. It involved about half the manpower of the Royal New Zealand Navy at the time – approximately 1350 officers and ratings. In their eight tours of duty the New Zealand ships steamed a total of 339,584 miles and fired 71,625 rounds of ammunition in action.

Between 15 March and 7 April 1951, New Zealand frigates supervised minesweeping operations by the South Korean Navy minesweepers YMS 502 and YMS 503. Rotoiti was in charge for the first four days then Tutira took over for the remainder of the period. The South Koreans worked hard in spite of many obstacles to efficiency. Their vessels were long overdue for maintenance, and their ageing equipment caused frustrating delays. Moreover, the South Koreans were always short of provisions and were only sustained by supplies of fuel and food from the Tutira. The New Zealanders task was to ensure that the whole area was covered.

During the same period HMNZS Rotoiti was supervising two other South Korean minesweepers, YMS 512 and YMS 515, off Haeju. Lieutenant Commander Turner, the captain of Rotoiti wrote in his report:

Frustration and difficulty have never been absent from the work and its progress is due to the determination, hard work and ingenuity of the officers and crews of the minesweepers. Woefully short of all their needs and lacking even the elementary tools for splicing, they have improvised and shared, never admitting they were beaten until they reached a stage where they could only muster enough equipment to stream one double sweep.

HMNZS Rotoiti was later involved in some of the first action. In July 1951, she put a landing party ashore at Sogon-Ni Point under the command of Lieutenant R.S Webber, RN.  Under the cover of bombardment from the ship, the assault platoon landed and two flank groups moved out with Bren guns to enfilade the Korean position. The assault group, made up of Able Seaman N.J. Scoles and E.J. Button, scaled a landslide below the enemy strongpoint, preceded by gunfire from the ship. They swept over the top of the hill, reached the position, shot a North Korean soldier who was about to throw a grenade, and took prisoner two more were hiding in a fox-hole. While bringing the prisoners back down the cliff Scoles and Burton came under rifle fire but a covering bombardment protected the party while it embarked and returned to Rotoiti.

The frigates second action was August 1951 involved two boats landing sailors who were accompanied by a small group of Royal Marines. Once ashore the raiders the raiders moved towards enemy guns across ground interlaced with trenches and covered with high grass. Ahead they spotted a group of North Koreans, as they raided to attack the landing party was challenged. The sailors and marines came under heavy machine gun fire and Able Seaman Bob Marchioni was killed. He was the only member of the New Zealand Naval Forces to be killed in action in Korea. The rest of the party silenced the enemy with a hand grenade and then made for the beach. They cam under heavy fire again as they reached the boats but finally got away with Bren gunners firing back at the enemy. Leading Sick Berth Attendant N.C.G Peach was part of the landing party and describes some of the events:

Norm Scoles came back along the beach carrying Able Seaman Marchioni.  He was probably just about exhausted and so he dropped Able Seaman Marchioni’s body among some rocks and came over the top of the hill to the boat…. around that time Lieutenant Webber fired a flare and everybody came back. We got the two boats and took off. The motor boats had canopies on them and I think that Ken Ireland who was on the Bren gun with me had the weapon mounted on the bow. He fired a burst into the shore but couldn’t see anything, but there had been some shots so they were actually after us. We got away with without any splashes of water around us.

In February 1952, HMNZS Taupo was in action when she was informed that the friendly island of Yang-Do was threatened with invasion from the enemy occupied mainland. She closed the island and saw 15 sampans packed with troops on their way from the mainland. The Taupo moved inshore and attacked the sampans. She destroyed 10 and was moving closer inshore to attack the reminder when she came under accurate fire from the batteries on the mainland. A near miss punctured the engine room and other shots fell under the bows and close to port. By this time it was growing light and the enemy gunfire was becoming uncomfortably accurate. The Taupo was forced to abandon her attack; however she had inflicted enough damage to stop the attempted invasion. She landed a medical party to help treat casualties on Yang-Do and embarked a number of wounded who were later transferred to the USS St Paul.

Lieutenant K.M Saull (Later to become Chief of the Royal New Zealand Navy) was the gunnery officer on Taupo. He describes the action:

We placed ourselves between the island and the shore, right in the middle of the North Korean fishing boats, and proceeded to sink them. There were probably twelve or fifteen boats involved, and I know we were using the Bofors and the pom-pom. I know that our crews were not particularly happy because it seemed a very much one sided fight. After we got into it and had been involved for I guess fifteen or twenty minutes the shore batteries opened up on us and at that point the gun crew’s attitude became rather different.

This was not the end of the affair:

When the boats had been dispersed, and I don’t think any of them got back to shore, clearly there was a problem on the island and we therefore closed the island and stopped. I can’t recall where we anchored, but we closed the island very close indeed at a point where we could easily see what was going on with the binoculars. We sent our doctor, Ian Forsyth, and the SBA ashore in the motor boat he discovered and he reported back that there were considerable casualties. Having trained in a fairly sophisticated society, I think that his experiences were quite traumatic, because he had to operate on people in huts surrounded by the family watching the operation.

He goes on to say that later on the St Paul after transferring the sick “the interesting thing was that the commanding officer of the South Koreans was very seriously wounded but refused to lie down, and with great fortitude got up and walked around and talked to his men. I remember Ian Forsyth saying quite clearly that under normal circumstances no European could possibly have survived that injury, but to a South Korean it didn’t seem to be that difficult and in fact we know that he recovered later on”.

Her job done, the Taupo resumed her patrol of the Korean east coast, where she had been busy firing at targets of opportunity and generally attempting to disrupt enemy rail communications.

In July 1953 the armistice was signed, the Korean War ended untidily, in a sense it was at best a draw. However it did achieve its initial objective of preserving the Republic of Korea. Since the end of the war an uneasy truce has been established which as persisted for more than 50 years, a testament to the New Zealand and other United Nation servicemen who have helped to bring it about. However the war cost the North Korean up to 1.5 million military personnel killed-in-action and a further 1.5 million civilians killed during the fighting or by UN air attacks. The United Nations forces including the South Korean forces lost 776,360 killed-in-action. 990,968 South Korean civilians were killed during the war when the North Korean and Chinese forces swept southwards.

Since 1998, when New Zealand established a Defence Attaché in Seoul, it has actively participated in the work of the United Nations Command Military Armistice Commission (UNCMAC). This was established to monitor the Armistice Agreement and report Armistice Violations within the demilitarised zone. Since 2004 New Zealand has committed NZDF officers to UNCMAC the mandate for this deployment finished in August 2019.

Read more about RNZNs involvement in Korea in issue 10 of the White Ensign.