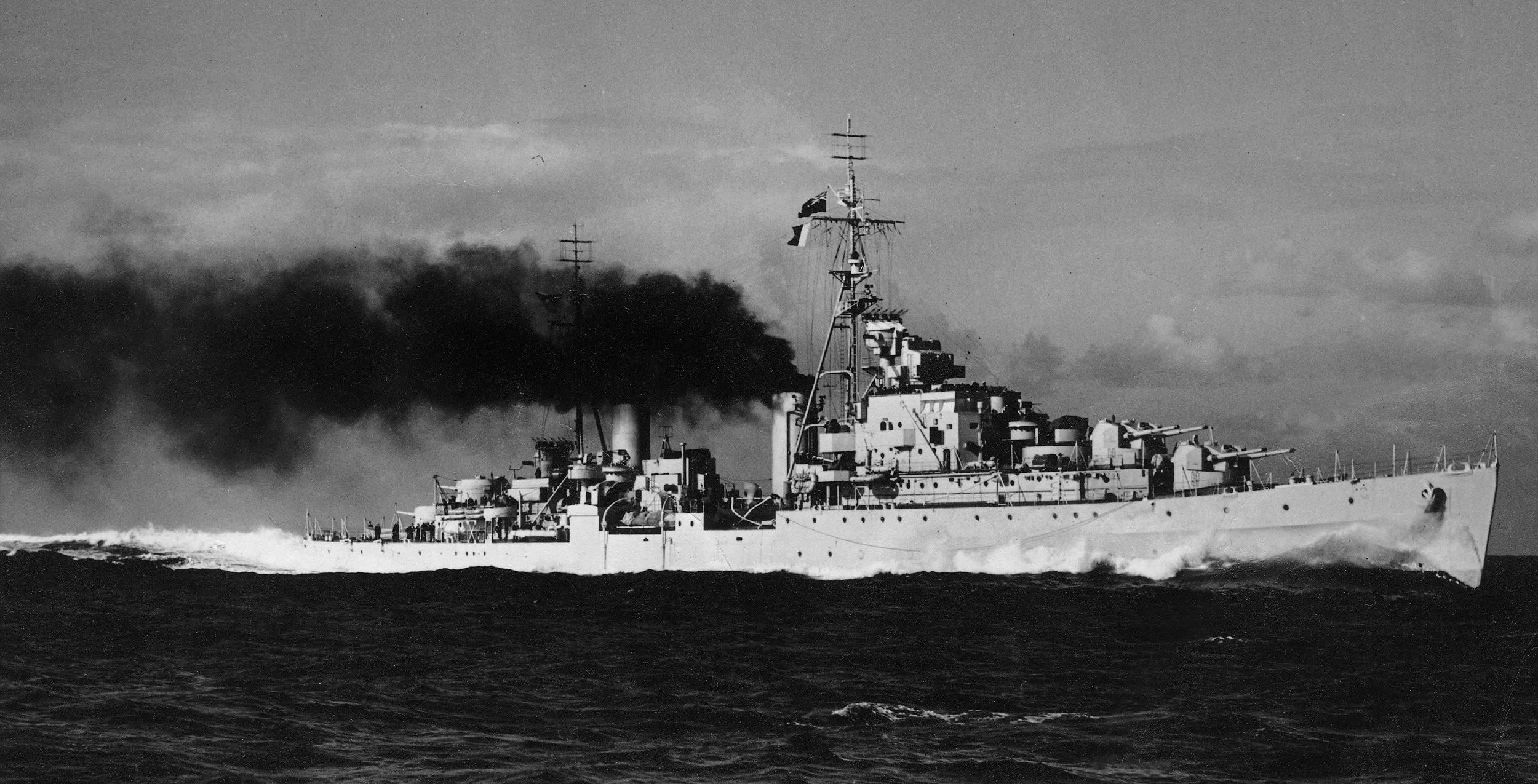 The eighteenth ship to bear the name Bellona was a Improved Dido-class cruiser, launched by Lady Lithgow on 29 September, 1942. One of a class of five anti-aircraft cruisers ordered by the Royal Navy in 1937, Bellona was laid down by Fairfield Ship Building and Engineering, Glasgow, on 30 November, 1939 and commissioned into service on 29 September, 1943. Due to wartime shortages the design was changed during the construction, and only two other ships of this class were constructed: HMS Black Prince and HMS Royalist. HMS Bellona was commissioned into active service on 30 September, 1943 and after completion of final acceptance trials, she underwent a work-up at Scapa Flow from November 1943 until January 1944. Towards the end of 1943, Bellona was adopted by the people of Fifeshire, an association which remained with the ship throughout its life.

After her work-up, Bellona was assigned to the fleet supporting Operation Neptune, the naval operation in support of the Normandy landings. She was then attached to Force 26, operating against enemy convoys off the coast of France. Bellona then joined the 10th Cruiser Squadron, based at Scapa Flow for operations off the coast of Norway, including participation in two raids against the German battleship Tirpitz in Alten Fjord, Norway. She then formed part of the escort of several convoys to Russia through to the end of the war in Europe in May 1945.

At the end of the Second World War the Royal New Zealand Navy had two cruisers, HMNZS Achilles and Gambia. Achilles was thirteen years old and essentially obsolete, while Gambia, although only three years old and a specialist anti-aircraft cruiser, was large, requiring a complement of around 1000 men. Given the rapid demobilisation of the RNZN in 1945-1945 there were not sufficient officers and ratings to keep Gambia manned. After some consideration and consultation with the Admiralty it was agreed that the most appropriate replacements for Achilles and Gambia would be two ships of the Modified Dido-class. HMS Bellona and Black Prince were the two ships decided upon.

In mid-1946, Bellona began a refit at Chatham and was commissioned into RNZN service on 1 October 1946. The crew came from the Achilles and Gambia who both had returned to service under the Royal Navy. Bellona arrived in New Zealand on 15 December 1946 to become the RNZN flagship. Bellona would fulfil the bulk of the duties required of these vessels in the role begun by HMS Chatham in the post-First World War period. With Black Prince in reserve, Bellona was the only operational unit of the RNZN for the next two years. She made port visits, Vice Regal Island cruises, undertook sea training and exercised with the Royal Australian Navy.

When Bellona left Nelson port in November 1948, her bow failed to clear the mudflats off Haulashore Island. She was stuck fast for eight minutes, however she didn’t sustain any damage. It was a case of “all hands aft, engines full astern, and ‘everybody jump’ in unison”. Bellona came free when the combined weight of 550 men (about 40 tonnes) did the trick. Unfortunately, two of the cooks jumped overboard and had to be picked up. In December 1948, two Ordinary Seamen were killed in a ship’s boat accident while off anchor at Oamaru, when they were crushed between the ship and the stern of a motor cutter which they were lowering. A few weeks earlier, members of the ship’s company ashore in Christchurch had assisted the Police and Fire Brigade at a major fire in Ballantyne’s department store. In March 1949, Bellona used her guns for the last time when she sunk an old coal hulk in Palliser Bay.

On 31 March 1949, Bellona was officially designated the flagship of the newly reconstituted New Zealand squadron and would serve with the Loch-class frigates purchased from Britain in 1948. When the six Loch-class frigates arrived the ‘New Zealand Squadron’ was revived with the Captain of Bellona being Senior Officer. On one memorable occasion, in September 1949, Bellona and five of the frigates sailed from Auckland for exercises in the Hauraki Gulf before proceeding to Australia for joint exercises there. While training with the Royal Australian Navy (RAN) in 1949, six men were injured when a gun charge flashed back in B turret during exercises with the RAN. With the introduction of Compulsory Military Training (CMT), men who chose naval service undertook sea training on the cruiser from 1950 through to the end of 1951.

While on exercise with the RAN in February 1951, an aircraft from the carrier HMAS Sydney accidentally fired a practice rocket at the Bellona instead of the towed target. The missile struck the ship, damaged a whaler that had just been repaired, tore a hole in the quarterdeck aft of Y turret and bounced over the side. The crew’s “feelings [towards the RAN] ran high for a time”. Fortunately, none of the crew was injured and the damage was repaired quickly.

In March 1951, the waterside workers went out on strike in New Zealand. This spread to other unions, such as the West Coast coal miners. The government directed the armed services to undertake work usually done by these unions. Bellona was recalled from Australia to provide crew for handling strike-bound cargo on the wharves. Her crew worked the Wellington, Auckland and New Plymouth wharves alongside Army and Air Force personnel. Her presence in the capital was important in at least two ways. She represented a 6270 ton (7801 tonnes) slice of authority and could house and feed the men working on the wharves.  The sailors worked long hours when compared with the waterfront work gangs. Once the strike was broken in July 1951 the ship and its men returned to normal duty.

At the end of 1951, the cruiser went into a refit, completing post refit trials in early 1952. After these trials, visits were made to several New Zealand ports before the ship made ready for a major deployment. It had been proposed that one of the New Zealand cruisers should make an annual deployment to the United Kingdom, in order to maintain operational efficiency. However, financial restraints had precluded Bellona from making the annual deployment to the UK until 24 June 1952. This was treated as a training voyage and while in Britain, she would bring back naval stores.

Bellona journeyed via Australia, Singapore, Ceylon (Sri Lanka), India, Pakistan, Aden and Malta, arriving at Portsmouth on 6 September. In the United Kingdom there was a full programme, including visits to towns and cities that had relationships with New Zealand towns, as well as participation in Exercise Mainbrace, a major NATO Exercise.

One of the more unusual events of the visit was the presentation to Her Majesty the Queen, of a small pistol for Prince Charles. This task had been entrusted to the Captain by a lady in Auckland, on the basis that the pistol was reputed to have belonged to Prince Charles Stuart “Bonnie Prince Charlie”. Another historic event was the hosting on board of the whole of the Board of the Admiralty, the only occasion on which this had been done. One tragic episode was the death of the Senior Commissioned Electrical Officer while at Bombay. After six weeks in the United Kingdom Bellona sailed for New Zealand, arriving in Auckland on 14 December, 1952 to be paid off. On return, the ship was placed in reserve, HMNZS Black Prince was commissioned as a replacement.

In February 1953, Bellona was placed into the reserve as a HQ ship of the reserve fleet, accommodation for ships undergoing refits, and training. Bellona was refitted in 1954 and had sea-trials in May-June of that year.

On 21 September 1955, Bellona was recommissioned from the reserve under the command of Captain Peter Phipps DSC, RNZN. The purpose of this was to return the ship to England and for the crew to be present at the commissioning of HMNZS Royalist. The Naval Board were keen to ensure that as many young ratings as possible were given the opportunity to do this commission, and the idiosyncrasies of the English language resulted in one of the more memorable signals in New Zealand naval history: ‘Ratings drafted to Bellona for passage to UK should be vice trained men’.

She sailed from Auckland on 14 October 1955, arriving in Portsmouth on 12 December 1955. She was prepared to be paid off and returned to the Royal Navy. The ship’s company from Bellona transferred to the refitted Royalist to commission her into the RNZN. Bellona was paid off from the RNZN on 17 April, 1956 and put into Royal Navy reserve. In 1958, Bellona was sold for breaking up and sent to a breakers yard near Swansea.

Battle is Our Business

The name Bellona comes from Roman mythology. Bellona was the spirit of fury in war, and she was the companion of Mars, the Roman God of War. The Temple of Bellona stood near the gate of Carmenta, in Ancient Rome. The priests of Bellona were chosen from among the gladiators.

A new badge was designed for the Bellona when she was launched in 1942. The name Bellona was chosen, as it had not been allocated to a ship serving between the First and Second Word Wars. The badge shows trophies of war, an allusion to the legend of Bellona. Some versions of the badge exist showing only the helmet. This badge may have been intended for use on ship’s boats or gun tompions. A gun tompion is a plug for a gun barrel that keeps out moisture and dirt. A new badge was designed and approved on 7 July 1943.