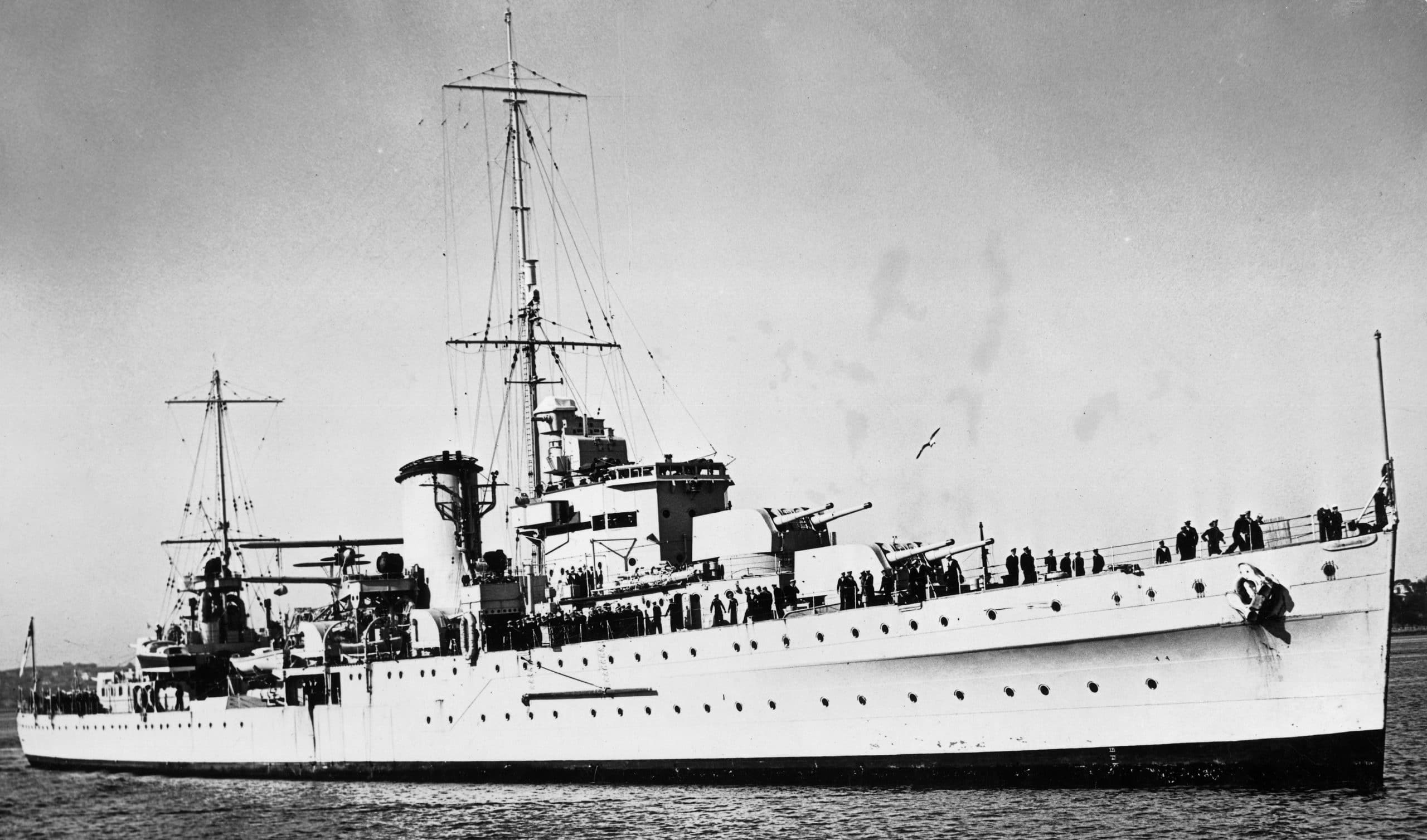 HMS Leander was built in His Majesty’s Dockyard Devonport, England, being the name ship for a class of light cruisers. Leander was laid down on 8 September 1930, launched on 24 September 1931 and commissioned into the Royal Navy on 23 March 1933. The ship was acquired by New Zealand, on loan; along with a sister ship HMS Achilles, to replace HM Ships Dunedin and Diomede, respectively. A result of the acquisition of these ships was the expansion of dockyard and naval base facilities and the lengthening of Calliope Dock.

Leander commissioned for New Zealand at Devonport, England on 30 April 1937. During the subsequent workup period she attended the Coronation Review at Spithead on 20 May, some members of the ship’s company marching in the Coronation Parade in London. The ship departed England on 2 July for New Zealand, steaming via Jamaica, Balboa and Pitcairn Island en route, arriving at Auckland on 18 August 1937.

Leander toured New Zealand ports after arrival from England and over the next two years also participated in exercises in home and Australian waters, as well as undertaking visits to the Pacific Islands.

In what was New Zealand’s first act of the Second World War, Leander departed Auckland 30 August 1939 for Fanning Island in the central Pacific, to land a small garrison. This deployment, prior to the outbreak of hostilities was in anticipation of a possible repeat of the destruction by German Naval Forces of the transpacific cable link in 1914.

With Achilles deployed overseas Leander patrolled the seas in the New Zealand area which included two visits to Campbell and Auckland Islands in search of German Raiders, between September and November 1939. However, Leander did not locate the one of the Raiders’ supply ships Erlangen, which was in a remote anchorage in the Auckland Islands during the time of the ship’s first visit. Six troopships carrying the 1st Echelon of the New Zealand Expeditionary Force to the Middle East were escorted to Australia in January 1940, before Leander participated in the New Zealand Centenary celebrations at Waitangi, on 6 February 1940.

On 2 May 1940 Leander departed Wellington as a part of the escort for the troopships carrying 6,800 men of the 2nd Echelon of the New Zealand
Expeditionary Force. When crossing the Indian Ocean, Leander was detached for Alexandria, while the remainder of the convoy proceeded around the Cape of Good Hope.

It had been intended that Leander would serve in the Mediterranean, but this was changed shortly after her arrival at Alexandria and she joined the East Indies Station at Port Sudan on 4 June 1940, embarking the Admiral Commanding the Red Sea Force. The function of this force was convoy escort and the protection of shipping in the Red Sea and Aden area.

June was an eventful month for the ship, experiencing air attacks, and although not hit, Leander did suffer splinter damage from near misses, and destroying a damaged Italian submarine ashore south of the Italian naval base at Massawa, Eritrea on 27 June.

The next few months were passed with Leander engaged in monotonous patrol and escort duties, enlivened only by occasional air attacks. With accompanying destroyers the ship engaged two Italian destroyers which attacked a convoy from Massawa on 21 October 1940. HMS Kimberly Iater sank one of them but was damaged herself and taken in tow by Leander.

After destroying a fish factory by gunfire in November Leander docked in Bombay in December. The ship sailed again as escort for a convoy to Aden and up the Red Sea on 27 December, on completion of which she joined the Eastern Fleet, based at Colombo in January 1941.

Here again the main duty was the protection of shipping, however convoy escort duty was varied by the need to seek out enemy raiders known to be in the Indian Ocean. The first of these patrols commenced on 24 January, when a distress signal from the British steamer Mandasor was received. Leander and HMAS Canberra searched the area for what was later known to the Raider Atlantis, but without success.

On 27 February, following further convoy escort work and patrols Leander sighted a ship at 10.37am, which proved to be the Italian Raider Ramb 1. After a short engagement Ramb 1 was sunk, Leander rescuing survivors, which comprised all but one of the crew, however, one later died of wounds.

Patrolling with HMAS Canberra the following month, Leander was in a supporting role when Canberra sank the German ship Coburg and the captured tanker Kitty Brovig, which was being used to the enemy Raiders. Similarly she was part of the patrolling forces when HMS Cornwall sank the Raider Penguin.

Leander sailed from Trincomalee on 23 May 1941 for the Mediterranean, where it had initially been agreed, the ship would be in support of New Zealand troops embattled on Crete. However, by this time Crete had been lost and Leander formed a replacement for one of the four cruisers which had been lost during the battle and evacuation of the Island.

The first operation for Leander in the Mediterranean was Operation EXPORTER, a campaign against Vichy French forces in Syria. Between 12 and 26 June the ship engaged Vichy French destroyers and came under attack by German aircraft on several occasions, fortunately without being damaged.

After another period of operations in support of Cyprus, Leander formed a part of the escort for ships bound for Australia, eventually arriving at Wellington on 8 September 1941. Her deployment had lasted 16 months.

With the entry of Japan in the war Leander saw much service escorting troop transports and supply ships to and from New Zealand, Australia, Noumea, New Hebrides, Fiji and other Pacific islands. On 7 August 1942 American Marines landed on the island of Guadalcanal in the Solomon Islands. Leander had been involved in escorting convoys to the perimeter of the area and in mid September joined Task Force 67 in the theatre of operations. However, on 19 November 1942 a crack was found in the hull requiring the ship to return to Auckland for urgent repairs.

Repairs to Leander were delayed a little by the Dockyard completing a refit on Achilles after which Leander underwent a short refit. She was operational again in March 1943, engaged mainly in escort duties as far afield as Pearl Harbour and Bora Bora (Tahiti).

On 11 July she joined Task Force 18 at Espiritu Santo, replacing the cruiser USS Helena which had been sunk. The Task Force was patrolling off the Island of Kolombangara on the night of 13 July when a Japanese force was encountered. Leander was hit amidships by a 24-inch (610mm) torpedo which killed 27 and wounded 15, three seriously. By superb damage control the ship was able to proceed to Tulagi, where temporary repairs were effected enabling a return to Auckland on 29 July.

The damage was beyond the capacity of the dockyard and on 25 November 1943 Leander departed Auckland for Boston, arriving there on 23 December. Repairing and refitting Leander was to take 21 months and the ship was paid off from the RNZN on 8 May 1944. Many of the ship’s company then joined HMNZS Achilles when that ship recommissioned later in the month.

Leander recommissioned in the Royal Navy in September 1945. She joined the Mediterranean Fleet in 1946, returning to England to finally pay off in early 1948. The hulk was used in firing exercises in 1950 before being scrapped.

The badge of Leander is derived from the Arms of Admiral Sir Thomas Thompson who was in command of a former ship of the name and in the think if the fighting at the Battle of the Nile. After this battle the then Captain Thompson was ordered by Lord Nelson to give passage to Captain Edward Berry who was entrusted with Nelson’s dispatches to the Commander in Chief. When Leander was off Goza near the Island of Candia a French ship of the line Genereux was encountered. Leander was considerably damaged from the Battle of the Nile, while Genereux had escaped intact and outgunned Leander. After an epic ship on ship engagement during which Admiral Thompson lost a leg, Leander was surrendered. The badge itself was designed for the name ship of a class of cruisers built during the 1930s and approved on 15 April 1930.

LEANDER: Leander lived in Anatolia and used to swim across the Dardanelles each night to visit his lover Hero who was a priestess of Aphrodite in Sestos. One night he drowned and Hero flung herself into the sea.