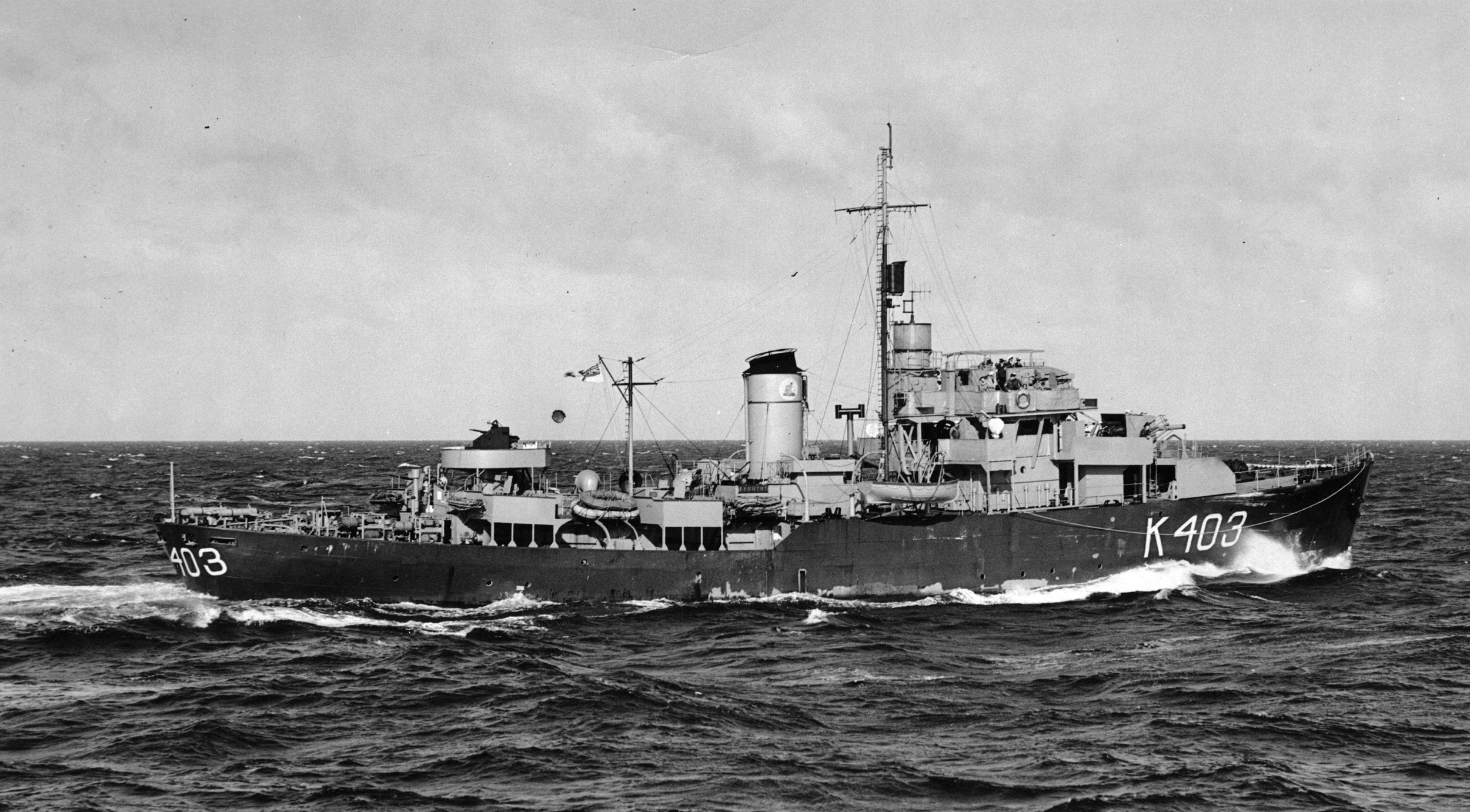 In 1943, New Zealand was seeking more escort ships for the RNZN. The Royal Navy offered Arbutus and her sister ship Arabis as a gift to the RNZN and New Zealand accepted gratefully. They were adapted to operate in tropical environments. HMNZS Arbutus was commissioned into RNZN service on 16 June 1944 and was completed by 5 July 1944.

Also could be fitted with an additional 4 x 20mm guns

This class was developed in 1942 from the Flower-class corvettes and many were built in Britain and Canada between 1942 and 1944. The original design had been based on a whale chaser built in 1936. They were very seaworthy vessels and had incorporated developments that improved their usefulness as anti-submarine patrol and escort ships in both coastal and ocean waters.

In 1943, New Zealand was seeking more escort ships for the RNZN. The Royal Navy offered Arbutus and her sister ship Arabis as a gift to the RNZN and it was accepted gratefully. They were adapted to operate in tropical environments and as the ships neared completion New Zealand sailors arrived to man them. The workup period for Arbutus was completed by 23 July 1944 and she sailed for New Zealand on 1 August 1944.

She reached New Zealand via the Panama Canal, San Diego and Fiji where south of Viwa Island she was run aground on a shoal on 7 October 1944. She was doing at 15 knots at the time the shoal was struck and it caused major damage to the ship including the loss of the rudder. Two United States Navy vessels rescued her and took her under tow to Suva where HMNZS Aroha took her on 20 October 1944 for Auckland. Close to Auckland, the tugboat William C. Daldy took on the tow and she arrived in Auckland on 27 October 1944. The commanding officer was court-martialled for the incident. Arbutus was taken to Lyttelton where she was repaired by April 1945 and returned to Auckland early May 1945.

In May 1945 Arbutus was offered to the British Pacific Fleet. She sailed for Sydney to be fitted out as a radio and radar maintenance ship. This increased her complement to 102 officers and men. She joined the Fleet Train in Japanese waters at the end of July 1945. She spent the next three months performing repair work and escort duties. Arbutus was present at Hong Kong for the formal Japanese surrender. In September she was released from the British Pacific Fleet and returned to Auckland in October 1945.

In November 1945, Arbutus took a scientific party to the Three Kings Island and remained there into December 1945 and then returned to Auckland. In January 1946, she along with her sister Arabis were converted into minesweepers to clear the Hauraki Gulf minefields. Working with HMNZS Kiwi, the task was begun in March 1946 and completed in June 1946.

From September 1946 to January 1947 Arbutus carried out a cruise of the Pacific Islands to ‘show the flag’.  She attended the 1947 Waitangi celebrations; the first visit of a naval vessel after the new flagpole had been erected in 1946. In April 1947 she took an urgently needed supply of avgas to Aitutaki and from May to July 1947 she visited the Cooks, Tokelau and other island groups. She undertook and New Zealand cruise from October to December 1947 and she returned to Waitangi with Arabis for the 1948 celebrations.

In April 1948, she left New Zealand in company with Arabis and sailed via Australia, Singapore and the Mediterranean, arriving in Portsmouth on 29 June 1946. The ship’s company used her as accommodation while they commissioned the Loch-class frigates.

HMNZS Arbutus was paid off from RNZN service in September 1948. In 1951 Arbutus  was broken up.