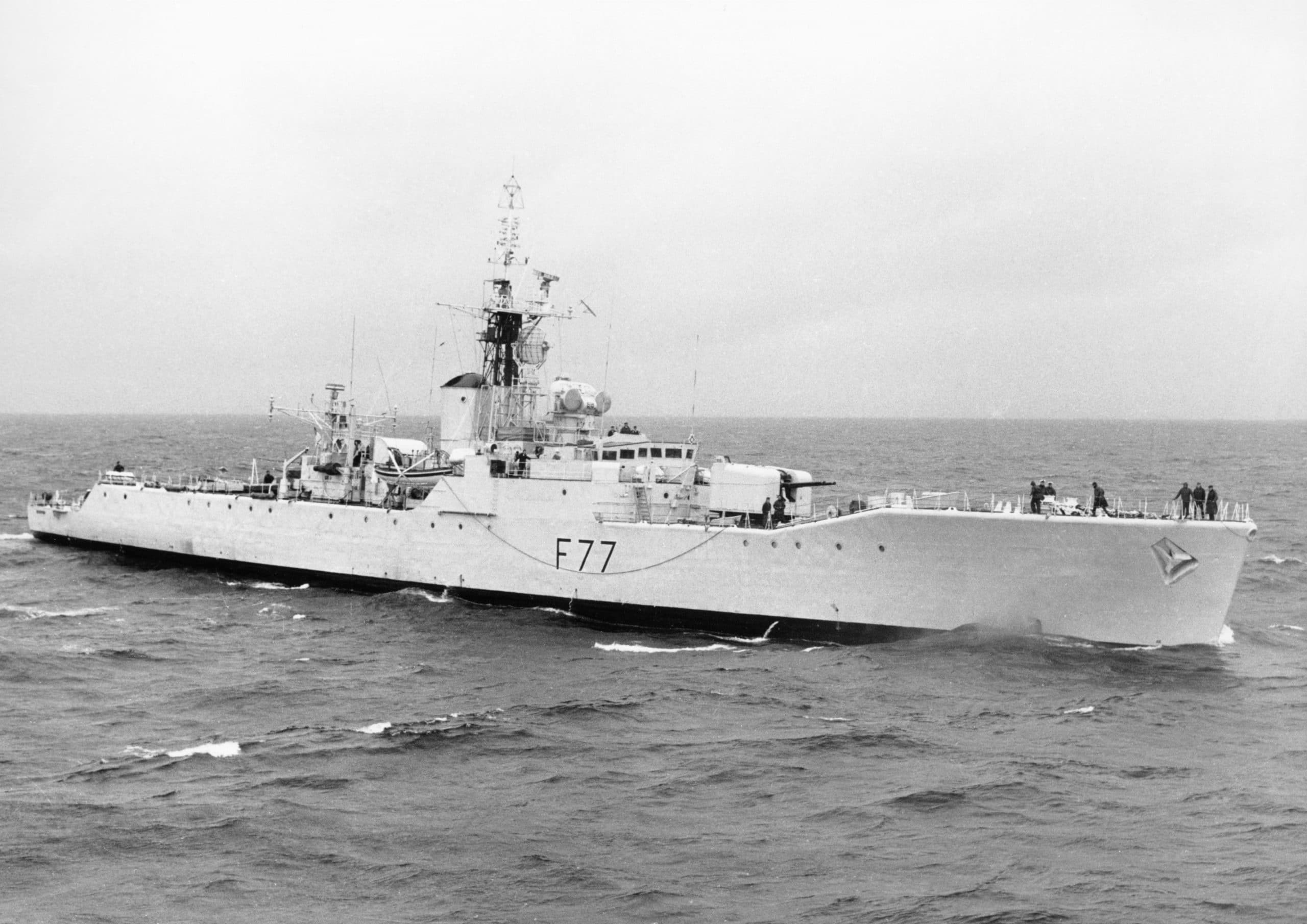 This Whitby-class Type 12 frigate was designed for the RN in the early 1950s for ASW against the Warsaw Pact submarines. Blackpool was the last Whitby to be constructed and was loaned to the RNZN while HMNZS Canterbury was being built.

This badge was designed and approved in September 1940 for the first ship to carry this name, a Bangor-class ocean-going minesweeper HMS Blackpool launched in 1940. The ship served for the rest of the war and was sold off in 1946. This badge was retained for the Whitby-class frigate when she entered service with the RNZN. Due to the short term of her service, no badge was issued with the fern-leaf surround. Blackpool is a seaside resort in Lancashire on the west coast of England.

There was one battle honour for Normandy 1944 awarded to the minesweeper.

This Whitby-class Type 12 frigate was designed for the RN in the early 1950s for ASW against the Warsaw Pact submarines. Blackpool was the last Whitby to be constructed and was loaned to the RNZN while HMNZS Canterbury was being built. In 1963-64 Blackpool went a major refit at Chatham and was commissioned for service with the Far East Fleet on 9 December 1964.  Upon the decision being made to loan this ship to the RNZN, Blackpool returned to Plymouth on 16 February 1966.  She was commissioned into RNZN service on 16 June 1966 at Chatham under the command of Commander J.I. Quinn. During her initial trials she suffered a boiler failure and had to return for repairs. In July she had a shakedown cruise around Cowes. This was followed by a Harbour training week at Portland and then she had her first sea week from 28 July to 1 August 1966. After a maintenance period she shifted to Portsmouth arriving 12 August 1966. She did a trip from there to Amsterdam, Guernsey and returned on 31 August. In early September she spent in dock and returned to Portland. She had a Flag Officer Sea Training (FOST) sea inspection in late September and also carried out Replenishment at Sea (RAS) with RFA Retainer and then went to Portsmouth.

She left Portsmouth on 9 October 1966 and voyaged through the Mediterranean stopping at Gibraltar and Malta. While at Malta she met HMNZS Santon returning to the UK and did a RAS[L] at sea with RFA Wave Ruler on 22 October. She transited the Suez Canal and at Aden met HMNZS Hickleton in company with HMS Picton both returning to the UK. She arrived at Gan on 2 November and did another RAS[L] with RFA Tidereach. On 8 November 1966 she arrived at Singapore and took up station and began participation in exercises. During this time she visited Hong Kong, Pulau Tioman and Bangkok. From 24 February 1967 to 6 March 1967 she took part in FOTEX 67. Later that month she undertook exercises off Subic Bay. She was released from the Far East station and departed Singapore on 21 April 1967. Going via Darwin and Brisbane she arrived in Sydney on 10 May 1967. While there a crack was found in the keel and there were problems with the main and auxiliary feed pumps. She was in dock for repairs from 15-20 May. She first arrived in Auckland on 25 May 1967. Unlike HMNZS Otago & Taranaki she did not have her armament upgraded when in RNZN service and retained the weapons she was commissioned with.

Upon arrival, she took part in AUCKEX and then on 28 July she took part in Longex through to 9 August. She then went to Gisborne and was on the way to Picton when she was sent to Raoul Island to undertake a medivac. She returned to Auckland and then went to Dunedin and Piction as planned. On 19 October 1967 she went into refit through to 29 April 1968. Towards the end of the refit Commander D.J. Cheney took over as CO from 18 March. In May 1968 she went to Sydney for Command Team training at Jervis Bay. While at Sydney in June, a helo crashed on 5 June. She then took part on LONGEX 68 to 14 June and returned to Wellington. In July 1968 she took part in AUCKEX. She went to LONGEX on 28 July but this was curtailed on 1 August. She escorted HMNZS Inverell back to harbour after her collision with USS Caliente. ON 5 August she sailed to assist SS Gothic which has suffered a fire in her accommodation spaces that cost seven lives.

In late August to early October she took part in Exercise CORAL SANDS in Australia. After returning to Auckland, she departed again for passage to Pearl Harbour in company with an RN group. While in Hawaii, she took part in Exercise CONVEX 3/68 in November. After completing her final battle problem on 13 December, she departed Pearl Harbour for Singapore via Midway, Guam and Hong Kong arriving 24 January 1969. Once again she was posted to the Far East Station. She left Singapore on 31 March and took passage to Bangkok and then on to Hong Kong. On 2 May she assisted in a RAF helicopter medivac from the Russian vessel Never. She then went on to Japan and then to Manila for Exercise SEA SPIRIT. This was curtailed when HMAS Melbourne collided with USS Frank E. Evans. She then took passage back to Auckland arriving 30 June 1969. In August she took part in LONGEX 69. In October she was present in Gisborne for the Cook Bicentenary and returned to Auckland. On 15 October Commander I.H.D. Tyler took over as CO. In November she returned to Jervis Bay for JUC/LONGEX. She then returned via Ship Cove, Wellington, Lyttleton, and Wellington arriving in Auckland on 18 December 1969.

On 3 February 1970 she left Auckland for Waitangi for the celebrations in company with HMNZS Inverell & Kiama. Upon return to Auckland she went into another refit through to August. Commander R.E. Lawry took over as CO from 6 July. After post-refit trials, she departed Auckland on 5 October with FOF2 embarked as escort for HMS Charybdis with HRH Prince Charles embarked. She was at Suva from 8-12 October for the Fiji independence celebrations. After leaving Suva she took passage to Raoul Island and returned to Auckland on15 October. For the rest of the month she was part of RNZNVR training for Ngapona & Olphert divisions. In November she trained personnel from RNZNVR Pegasus & Toroa divisions returning to Auckland on 29 November 1970. This was her last active deployment for the RNZN. In January 1971 she acted as guardship for the One Ton Cup trials. She was then put into reserve as preparations were made to return her to the RN now that HMNZS Canterbury was ready to e be commissioned into service in the UK. Blackpool left Auckland on 22 April 1971 and was returned to the RN at Portsmouth in June 1971. The ship’s company was transferred to HMNZS Canterbury. Blackpool went into reserve and was sold for breaking up in 1978.