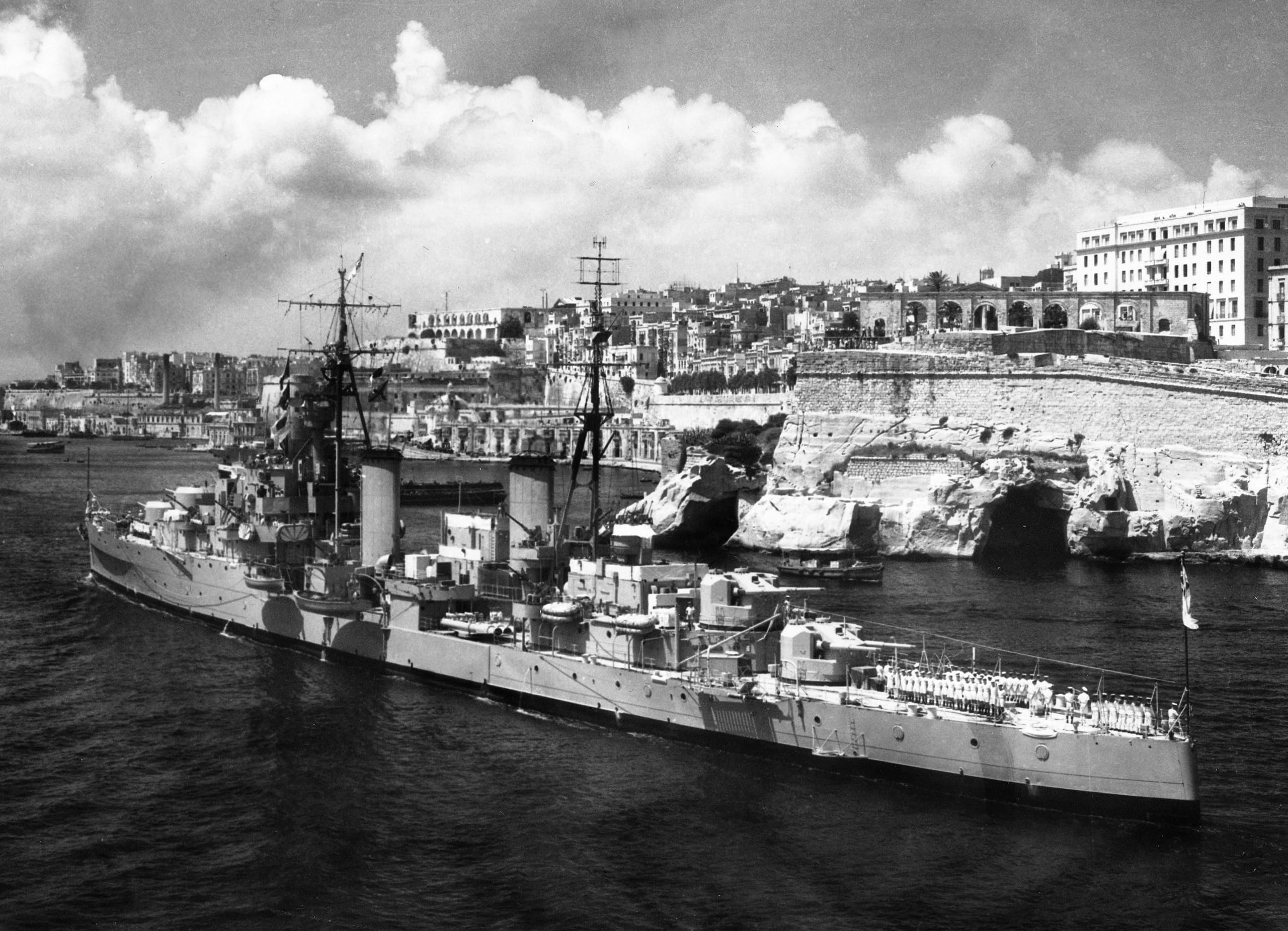 In late 1945 the New Zealand government announced plans to replace the cruisers HMNZS Achilles and Gambia with updated cruisers. HMS Black Prince was in New Zealand waters when the decision was announced that her and her sister ship HMS Bellona would be commissioned into service with the RNZN.

These Improved Dido-class cruisers were ordered in 1937 to be fitted with the dual-purpose 5.25” guns for both air and surface targets.  Work was suspended on the programme between 1940 and 1941 due to shortages of turrets and machinery.[1] Black Prince was land down at Harland and Wolff Belfast shipyard in November 1939 and completed by November 1943, the last of the three ships in this class to be completed.[2]

Black Prince was commissioned into RN service on 21 October 1943.  She was assigned to the fleet operating in the North Sea. Her first deployment was escorting Russian convoys in December 1943. She participated in raids on the on the French coast.  She was part of the Allied fleet assigned to Operation NEPTUNE, the naval part of the D-Day landings at Normandy on 6 June 1944. She then was deployed to the Mediterranean Fleet to support Operation DRAGOON., the Allied landings in Southern France in August 1944. She then supported Allied operations in the Aegean in late 1944.[3] In late 1944 the British Pacific Fleet (BPF) was formed so that the Royal Navy could participate and support the United States Navy in operations against the Japanese mainland, Indonesian oilfields and the Okinawa landings.  Black Prince left the Mediterranean Fleet and joined the BPF in December 1944. Her first task was to support naval operations against Malaya and the island of Sumatra. In April 1945 she was part of the Allied fleet taking part in Operation ICEBERG, the landings on the Japanese island of Okinawa.[4] In May 1945 she was ordered to tow the badly damaged destroyer HMS Quilliam from the Ryukyu Islands to Leyte Gulf for repairs. In July 1945 she took part in shore bombardments of the Japanese mainland near Tokyo. Black Prince was at Hong Kong when the Japanese surrendered in September 1945. She arrived back in Sydney after taking part in occupation duties in April 1946. [5]

In late 1945 the New Zealand government announced plans to replace the cruisers HMNZS Achilles and Gambia with updated cruisers. HMS Black Prince was in New Zealand waters when the decision was announced that her and her sister ship HMS Bellona would be commissioned into service with the Royal New Zealand Navy.[6] Black Prince paid off her ship’s company who returned to the United Kingdom in May 1946. Because both Bellona and Black Prince needed extensive refits the third of the class, HMS Royalist was loaned to the RNZN for an indefinite period.  Black Prince was commissioned into RNZN service and placed into reserve in June 1946.[7] There was a major refit begun in January 1952 which was completed by January 1953.  From December 1953 to January 1954 she carried out Royal Tour escort duties with the liner Gothic and was present at the Royal Naval Coronation Review at Spithead with HMAS Sydney as part of the ANZAC Squadron. In June 1953 while on the way back from the Coronation Review, she was coming into moorings in Malta Harbour when her bow tore side platings of a RN floating dock. Fortunately there was no major damage. [8]

On the way back to New Zealand Black Prince gave aid and assistance to the earthquake victims in the Ionian Islands in August 1953.

On 1 February 1954 in Tasman Sea Black Prince was handed over to the RAN Australian Squadron at 1015 local time and “Cheered Ship’ firing a 21-gun salute. When Black Prince assumed royal escort of Gothic, the former fired a 21 gun Royal Salute and also ‘Cheered Ship’. The royal escort being relieved (HMS Sheffield) also fired a salute as she relinquished escort duties. In the Tasman, the Australians fired their 21 gun salute, when taking over Escort. Black Prince fired her departing salute on being relieved. Between 1954 and 1955 she participated in exercises with the RAN off Australia and Singapore including an unfortunate incident in March 1955 when she bombarded the Australian town of Currarong with 5.25” shells due to an error in ranging.[9] Later that month, two ratings were killed when a demolition charge exploded. One of the ratings sacrificed his life to save the ship from damage.[10] July 1955 she was put back into fleet reserve taking over from Bellona and laid up at Devonport. A small refit was taken in 1957-1958. But by 1959 she was placed into extended reserve. In 1961 she was stripped of all fittings and equipment and sold to Japan. She was broken up in 1962.[11]

Details: The cruiser HMS Black Prince was lost at the Battle of Jutland and had an unofficial badge with three black feathers. When the name was reallocated for the new cruiser it was decided to redesign the badge.  A design was selected that showed an image of the Black Prince taken from his effigy in Canterbury Cathedral.  The badge was approved in November 1943. Edward, son of Edward III fought at the Battle of Crecy in 1346 and subsequently won the Battle of Poitiers in 1356. His son was crowned Richard II in 1377. It is believed he was called the Black Prince due to the black armour he wore in battle.[12]