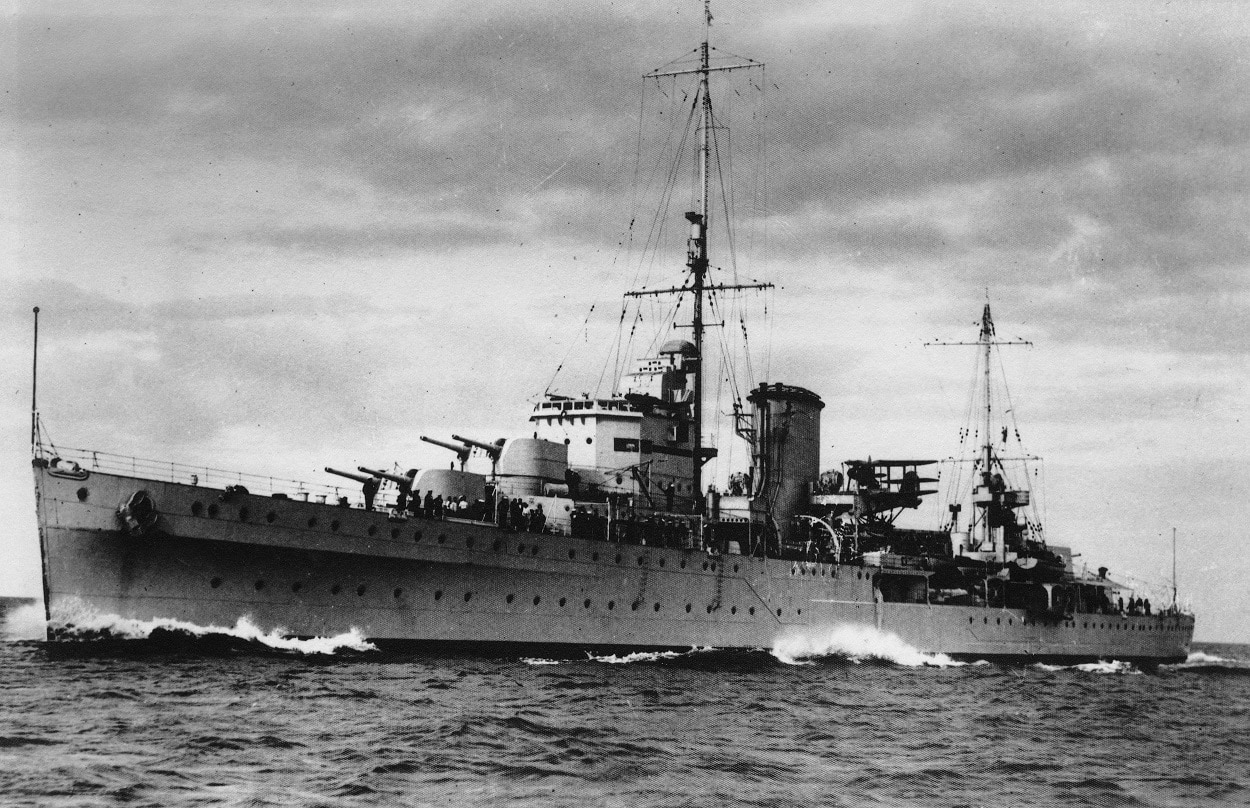 HMNZS Achilles was a Leander-class light cruiser which served with the Royal New Zealand Navy in World War Two. She was involved in the Battle of the River Plate.

[1] Made at Crayford in 1932 – this piece of equipment remained in use during her New Zealand service despite the improvements in fire control from 1934 to 1946.

HMS Achilles was built by Cammel Laird & Company of Birkenhead, England, being laid down on 11 June 1931 and launched by Lady Stanley, the wife of the Parliamentary Secretary for the Admiralty, on 1 September 1932 and commissioned into the Royal Navy on 5 October 1933. The ship was acquired on loan from Britain, along with HMS Leander to replace HM Ships Diomede and Dunedin respectively. A result of the acquisition of these two ships was the expansion of dockyard and naval base facilities and lengthening Calliope dock. These cruisers were smaller and lighter than the 8-inch cruiser classes of the 1920s and reverted to 6-inch guns in twin-gun turrets.

Achilles commissioned for New Zealand at Chatham on 31 March 1936, departing Sheerness on 22 April. After calling at Spithead to embark the Walrus aircraft, the ship sailed 26 April for New Zealand. Nine weeks were spent with the Home Feet at Gibraltar before Achilles sailed on 1 July via Jamaica, Panama and various small mid-Pacific islands before arriving at Auckland on 6 September 1936.

After arrival from England Achilles toured New Zealand ports and also participated in exercises in home and Australian waters, as well as undertaking Pacific Islands winter cruises. The ship returned to England at the end of 1938 to change Royal Navy loan personnel and undergo a short refit. She departed Auckland early December 1938; proceeding via Panama, A severe storm was encountered in the Atlantic which caused some damage to the ship and the Walrus. Achilles arrived Portsmouth 24 January 1939, recommissioning on 27 January and sailed again for New Zealand on 21 February, reaching Auckland 8 May 1939 having travelled via Suez and Singapore.

Sailing from Auckland 29 August 1939, Achilles made for Panama and then patrolled down the west coast of South America to Chile, searching for German shipping. The ship passed through the Straits of Magellan on 20 October 1939 to join the newly designated South Atlantic Station, based on the Falkland Islands. From there similar patrols against German shipping and for the protection of British shipping were conducted.

Battle of the River Plate

Achilles, under the Command of Captain W.E. Parry RN took a very active part in the Battle of the River Plate, 250 miles east of Uruguay, on the morning of 13 December 1939. The superior and more powerful German ‘pocket battleship’ Admiral Graf Spee was damaged and cornered by three British cruisers of much smaller size and lighter armament, but having the advantage of numbers and speed.

Achilles suffered one near-miss from an 11 inch (280 mm) shell which damaged the ship and killed four ratings, and wounded seven other men, three seriously. The Royal Navy ships in the action, Ajax and Exeter received much more serious punishment, Exeter being hit several times and forced to withdraw with 61 dead and Ajax hit twice, with seven dead. Ajax and Achilles chased Admiral Graf Spee towards the neutral port of Montevideo. The German ship, which had 36 killed and 60 wounded, was scuttled off the port four days later.

After the destruction of the Admiral Graf Spee, Achilles remained on patrol off South America, visiting Buenos Aires and Montevideo in January 1940. She departed Port Stanley on 2 February bound for a refit at Auckland. She arrived back on 23 February 1940 to a hero’s welcome.

In the months following her return from South America Achilles was primarily employed on escort duties around New Zealand and in the immediate South Pacific. During this time she had several near encounters with German Raiders.

The first of these was on the night of 13 June 1940 when Achilles and the Armed Merchant Cruiser HMS Hector arrived at Auckland, at about the same time that the German raider Orion was laying a minefield across the entrances to the Hauraki Gulf.

Twice in 1941 Achilles again, just missed German raiders. The first occasion was 1 March 1941, when Orion and the captured tanker Ole Jacob were probably close behind in the East Cape region, all heading south. The second near miss was with Adjutant, whale chaser which had been captured by the German Raider Komet that laid magnetic mines off Lyttelton and Wellington on nights of 24 and 25 June 1941. Achilles and Adjutant must have passed close by each other, east of Cape Palliser early on 26 June 1941, as the German fled to meet the raider Komet off the Chatham Islands and Achilles was transiting from East Cape, arriving at Wellington early that morning.

With the entry of Japan into the war, the cruisers of the Royal New Zealand Navy came under the operational control of the United States Commander, Pacific, Admiral Nimitz, specifically the South Pacific Command. Achilles was generally employed in escort duties, but did provide cover for the occupation of Wallis Island by United States Marines in May/June 1942.

Achilles joined United States Navy forces participating in the campaign for the Solomon Islands at the end of December 1942. On 5 January 1943 Task Force 67 had conducted a bombardment of Munda Island and was patrolling near Cape Hunter, off the south coast of Guadalcanal. A group of four Japanese aircraft attacked the force and a bomb hit the top of X turret, blowing the top off and killing 13 men and injuring eight others. Achilles went to Espiritu Santo for temporary patching of the damaged turret, holing the US repair ship Vestal (AR4, built 1908), as she went alongside.

The damage to X turret could not be repaired in New Zealand and Achilles proceeded to Britain for repairs and modernisation. Included in the work undertaken was the removal of the remains of X turret, which was replaced with additional light anti-aircraft weapons, the fitting of twin four inch anti-aircraft guns in place of the single guns which had originally been fitted and the installation of modem radar.

The work took somewhat longer than anticipated because of an explosion which occurred while the ship was in dockyard hands, killing 14 men. Stoker William Dale was awarded the Albert Medal for his actions in saving the lives of several dockyard workers and Stoker Ernest Valentine and Engine Room Artificer William Vaughn received Mentions in Despatches for assisting him. Alter the refit Achilles joined the Eastern Fleet, later renamed the British Pacific Fleet, in the Indian Ocean in September 1944. With other units of the British Pacific Fleet Achilles arrived in Auckland in February 1945.

Achilles sailed for Sydney 26 April 1945 and on to Manus Island to join Task Force 57 (which included another New Zealand Cruiser HMNZS Gambia) as the British Pacific Fleet was designated, on 22 May. Operations undertaken at this time were mainly directed against Japanese bases on the Sakishima (Ryukyu) Islands. After a rest and maintenance period at the forward base at Manus Island Achilles participated in a bombardment of the Truk Islands in mid June.

Redesignated Task Force 37, the British Pacific Fleet, including Achilles conducted air strikes against targets on mainland Japan. For the cruisers and other escorts a major function was providing defence against kamikaze attacks on the fleet. On 31 July 1945 when Achilles and Gambia with the Fleet Train for refuelling, they met up with HMNZS Arbutus Achilles returned to Manus Island mid August and then to Auckland for docking in early September 1945. She sailed again on 22 September for Manus and Guam, arriving in Tokyo Bay on 6 October 1945 to relieve Gambia. Achilles visited several ports in Japan before departing for Hong Kong on 19 January 1946. After four weeks there Achilles departed for Auckland, via Subic Bay, Manus and Sydney, arriving on 17 March, ending her service with the British Pacific Fleet.

Achilles made a last tour of New Zealand ports during May and June of 1946, before sailing from Auckland on 17 July for England. She arrived at Sheerness on 10 September and then went to Chatham where she paid off on 17 September 1946. The ship was then given a major refit before being sold to India and commissioned into the Royal Indian Navy as HMIS Delhi. In October 1969 the association between the ship and New Zealand was rekindled when Delhi visited Auckland and Wellington. INS Delhi was formally decommissioned on 30 June 1978 and some of her fittings, including Y gun turret and the Director Control Tower were later shipped to New Zealand.

The gun turret and Director Control Tower are mounted at the entrance to the Devonport Naval Base and the silver bell, presented by Lady Stanley at the ship’s commissioning, is presently on loan to the Auckland War Museum.

Motto: Fortiter in Re (Bravely in action)

This badge was designed in England by Major ffoulkes, following a decision to allocate the name Achilles to one of the new Leander Class cruisers. It shows the head of Achilles on a red field.

Over the years variations have appeared with a blue ground, some with the head in silver while others include the ships motto under the head. While the origin of a head in silver can be explained from examination of the sealed pattern which has a cut-out black and white photograph of the head, pasted to a coloured drawing, the different background colours are more difficult to explain.

Despite the official design showing the badge with a red field, it would appear that both red and blue backgrounds were used during the ships service in New Zealand. When, in 1953, the Naval Board began assembling a collection of ships badges for their board room, the Dockyard supplied a badge with a red field. This was returned for repainting with a blue field. Although there is no documented background to this decision, it is perhaps relevant that there were many personnel still serving at this time, who had served in Achilles. Latter day reminiscences indicate that the badge had both red and blue fields during the ship’s New Zealand service. The badge was approved on 20 July 1931.

In Greek mythology, Achilles was a Greek hero of the Trojan War and the central character in Homer’s Iliad. His mother the Nymph Thetis, wished him to be immortal, as it was prophesised when he was born that he would perish in battle. To achieve this she dipped her child in the River Styx, the river which flows between the living world and Hades, the world of the dead, holding him fast by a heel. Thus he was protected from weapons of men, except for the one heel. During the tenth year of the battle for Troy he was hit by an arrow, shot by Paris, in the heel and succumbed to the wound.

Killed In action in X Turret

Commodore Davis-Goff served as a Petty Officer on HMS Achilles during the battle of the River Plate.