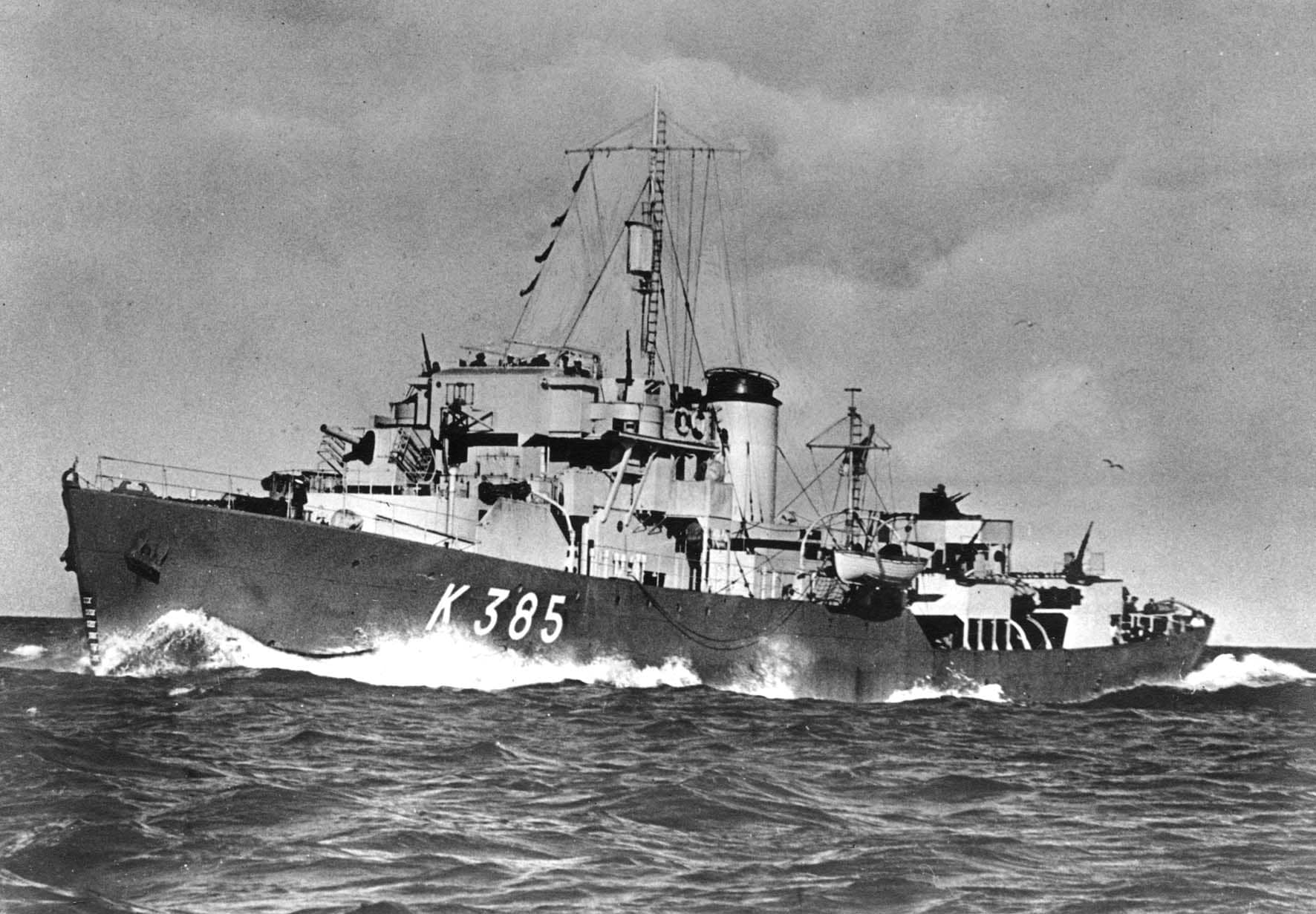 HMNZS Arabis was commissioned into RNZN service on 22 February 1944 and completed by 16 March 1944. This was a rugged simple design that was meant for wartime construction needs and to meet the need for escort vessels for the Atlantic convoys. In 1943, New Zealand was seeking more escort ships for the RNZN. The Royal Navy offered Arabis and her sister ship Arbutus as a gift to the RNZN. The gift was gratefully accepted by New Zealand. Both ships were adapted to operate in tropical environments.

When Lieutenant Commander Steelye commissioned Arabis she did not have a ship’s badge which was usual for wartime vessels for her type.  He resolved this by personally carving a large wooden tiki which he had fixed to the forward screen in front of the bridge. When he handed over command in late 1944 he wanted to take the tiki but by that time it was considered a ship’s fitting and the unofficial badge. Arabis would carry the tiki throughout her wartime career and after until she received the new badge in 1947.

In January 1947 it was decided to resume provision of ship’s badges and as Arabis was about to undergo a refit she was the first vessel to have a badge designed. The Captain Superintendent of the Dockyard designed the badge and had it approved in November 1944. No example of a colour image of the badge is extant but it is believed that it would have been the green plant against a solid red background. Arabis is a low growing plant with smooth leaves and purple or white flowers.

The battle honours ATLANTIC 1940-1942 are from a previous Flower-class corvette commissioned in 1940 and lent to the United States Navy and renamed in 1942.

This class was developed in 1942 from the Flower-class corvettes and many were built in Britain and Canada between 1942 and 1944. The original design had been based on a whale chaser built in 1936. They were very seaworthy vessels and had incorporated developments that improved their usefulness as anti-submarine patrol and escort ships in both coastal and ocean waters. Arabis was laid down on 26 February 1943 and launched at the George Brown & Co shipyards at Greenock, Scotland on 28 October 1943.  She was commissioned into RNZN service on 22 February 1944 and completed by 16 March 1944. This was a rugged simple design that was meant for wartime construction needs and to meet the need for escort vessels for the Atlantic convoys. These designs incorporated the lessons that had been learnt in anti-submarine warfare up to 1943.

In 1943, New Zealand was seeking more escort ships for the RNZN. The Royal Navy offered Arbutus and her sister ship Arabis as a gift to the RNZN and it was accepted gratefully. The ships were adapted to operate in tropical environments. As the ships neared completion, New Zealand sailors arrived to man them.

She was commissioned into the RNZN on 22 February 1944 under the command of Lieutenant Commander J.H. Steelye RNZNVR. During the workup Arabis was based with her sister ship at Stornoway on Lewis in the Outer Hebrides. Arabis completed her workup on 27 April 1944 and departed from Greenock on 23 May 1944 and arrived at Devonport naval base on 15 August 1944.  Upon arrival she was taken into the drydock for a refit then visited Wellington, Lyttleton and Dunedin in November 1944.

She departed for her war service with the RNZN on 26 November 1944 from Auckland for the Solomons via Tonga and Noumea, arriving at Renard Sound on 14 December 1944. On 16 December 1944 Arabis replaced HMNZS Matai as Senior Officer 25th Minesweeping Flotilla then based in the Solomons consisting of HMNZS Tui, Kiwi, and Breeze. She remained in the area until April-May 1945 when a detachment operated in the Ellice Islands off Funafuti.

On 12 June 1945 Arabis departed Guadalcanal for Auckland via Noumea and arrived on 20 June 1945. In July, she undertook two round trips to Noumea to escort back to Auckland with HMNZS Tui two groups of six Fairmile B motor launches.

In the post-war period she went on 35-day show the flag cruise to seven South Island ports and to Wellington in October-November 1945. She then took passage to Tonga for a cruise and visit in December 1945. In Janaury 1946, she was refitted as a minesweeper to take over with Arbutus the clearing of the Hauraki Gulf minefields along with HMNZS Kiwi, and the danlayers HMNZS Waiho, Waima, and Waipu as part of the 25th Minesweeping Flotilla. Beginning in early March it was completed on 4 June 1946. From there she was paid off in reserve on 25 July 1946.

On 27 Janaury 1948 Arabis was recommissioned and took part in the 1948 Waitangi Day celebrations on 6 February alongside Arbutus and HDML 1183. This was her last official duty with the RNZN. On 16 April 1948 Arabis departed New Zealand for the last time and sailing via Australia, Singapore and the Mediterranean, arrived at Portsmouth on 29 June 1948. Arabis moved to Chatham in early July and berthed alongside HMS Loch Shin which was one of the six Loch-class frigates that had been sold to the RNZN in 1948. The ship’s company prepared the ship for reserve and used it as accommodation until the frigates were ready for commissioning into RNZN service in September 1948.  Arabis was towed to Harwich and sold for scrap. In August 1951 she was broken up by T.W. Ward at Grays, near Tilbury.

Japanese naval dirk (dagger) that was surrendered to LT CDR…

Gloves used for handling mines in WW2 issued to S/LT…