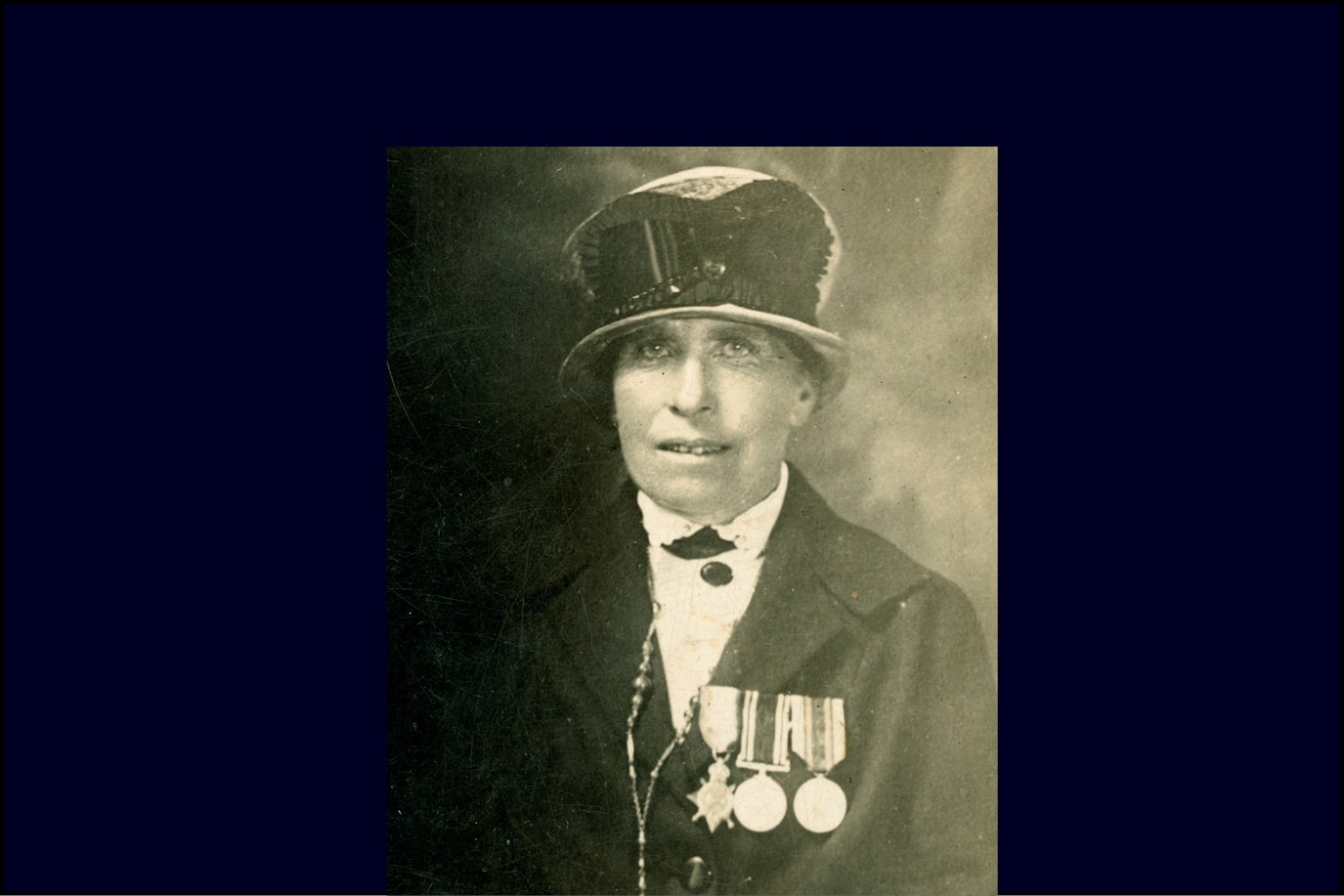 Emily “Ma” Burrows adopted the sailors of New Zealand and became “The Mother of the Navy”. Known by everyone on the base from the Commodore down, her thoughtfulness and diligence was tangibly recognised by the sailors and when she died in 1933, when she was accorded a full naval funeral.

Over the years she began to be called “Ma” and in turn she called them her “boys”. Everyone from the Commodore to the newest recruit knew who she was.

Emily was born in England in 1866 and married William Charles Burrows with whom she had four children, Jessie Lavinia, Elizabeth, William and Isabella. William was born on 19 December 1891 and soon after he turned 18, in February 1910, he joined the Royal Navy as a Stoker 2nd class for an engagement of 12 years. By 1912 he was a qualified stoker serving in the battleship HMS Venerable.

Emily, with sponsorship from Jessie Lavinia, embarked in the SS Surrey and emigrated to New Zealand with Elizabeth and Isabella, arriving in Auckland on 10 April 1912.

In Auckland, Emily and the girls set up home in Archhill. Two years later, in July 1914 HMS Philomel was commissioned for service under the New Zealand Government as the first unit of the New Zealand Naval Forces and with the outbreak of war in August, berthed in Auckland prior to escorting two troopships for the occupation of German Samoa. While Philomel was in Auckland Emily paid her first visit to the ship to say hello to the sailors.

Across the world, William was now a Leading Stoker serving in the battleship HMS Irresistible, part of the 5th Battle Squadron of the Channel Fleet. Irresistible was one of a class of eight ships displacing 15,000 tons with a mixed armament of four 12 inch, twelve 6 inch and sixteen 12 pounder guns. Although it had been launched in 1898, by 1914 they were outdated. In 1915 the remaining six ships of the class, two having already been sunk, were deployed to the Mediterranean. When the Gallipoli campaign opened in March 1915 with an attempt to force the Dardanelles with ships alone, Irresistible was part of the force. At 3.14pm on 18 March, the ship was hit by heavy shell fire which caused the engines to stop, and an hour later it drifted on to a mine which exploded under the starboard engine room. Attempts were made to take the ship in tow under heavy fire, but the damage was such that the ship had to be abandoned. Fortunately only 11 men were killed, but Leading Stoker William Burrows was one of them.

In 1921, it was decided that the ships of New Zealand Naval Forces, known as the New Zealand Division of the Royal Navy would be based in Auckland. HMS Philomel then steamed to Auckland and was soon joined by HMS Chatham. It was then that Emily began her regular Sunday afternoon visits to the ships. Irrespective of the weather she made the journey from Archhill to Devonport with her basket. Sometimes it contained flowers and fruit, or home-baked cakes and a paper bag of sweets. It was not unknown for her to leave the ship with her basket full of socks to be darned. She was also on hand for the departures and arrivals of the ships. Over the years she began to be called “Ma” and in turn she called them her “boys”. Everyone from the Commodore to the newest recruit knew who she was. That she was highly regarded was shown not just by the odd letter of appreciation, but by more substantial tokens. When the Royal Navy ratings from the sloops Veronica and Laburnum left for England in 1929, Ma Burrows was presented with an eight-day chiming clock from the men of Laburnum, while the men of Veronica handed her a substantial cheque. Subsequently the men of Veronica presented her with a specially cast gold “long service” medal.

In later years, Ma Burrows was able to move to a house in Queen’s Parade, Devonport, to be closer to her boys. Although small of stature, her standing was such that when she died on 26 June, 1933 she was affectionately known as “the Mother of the Navy”. Her Requiem service was held at the All Souls’ Church in Devonport. After the service the casket, borne on a gun carriage, was taken to O’Neil’s Point Cemetery. The pall bearers were representatives of the ships in port. Wreaths were sent by all the ships, including those absent overseas. At the end of the graveside service, Bugler Murray sounded the “Last Post”.

Every Sunday ‘Ma Burrows’, as she became known by the men of the New Zealand division, would visit the base bringing with her flowers, fruit and sweets for her ‘boys’. Eventually everyone, from the Commodore down to the newest recruit, was acquainted with Ma Burrows. Emily “Ma” Burrows adopted the sailors of New Zealand and…