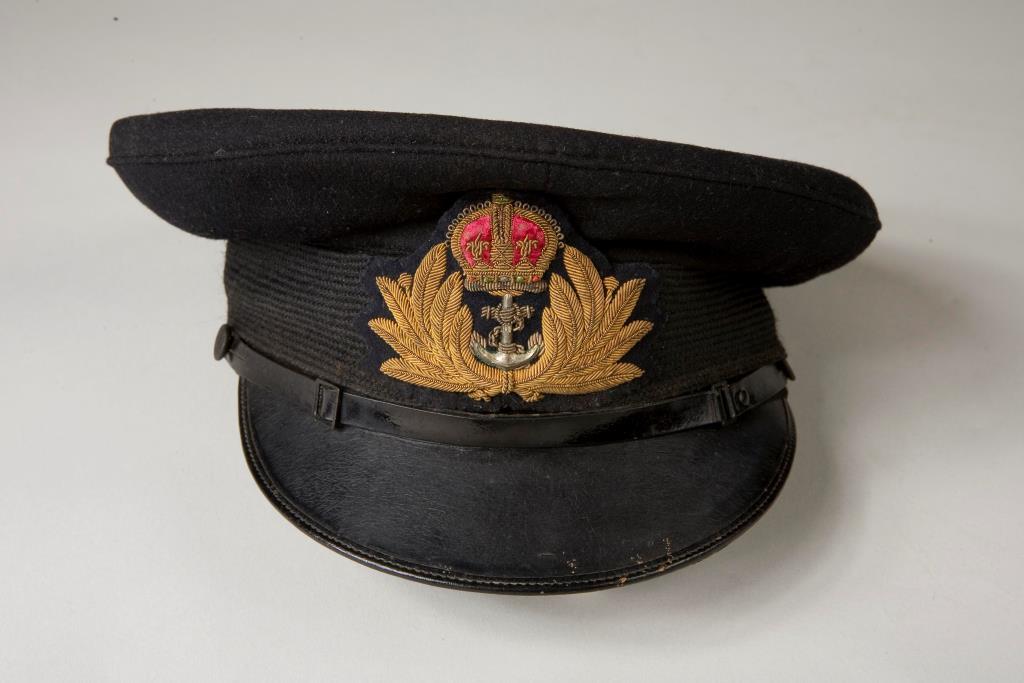 In the Royal Navy officers wore no uniform until 1748 when the Admiralty introduced uniform regulations. The three sided headdress known as the ‘Tricorne’ was worn after the style of the French with the wide4st part of the rim turned up at the back and the two sides meeting an corner over the nose. During hand-to-hand combat the hat was sometimes turned sideways and probably had a bearing on the next style of hat known as the Bicorne or Cocked Hat.

The officers peaked cap came into use about 1840 to supplement the Cocked Hat, the peaks of senior officer becoming embroidered in gold as part of their rank insignia in 1856. It was changed to an oak leaf design in 1860. When the cap first came into use it had no badge, only a band of gold lace. but during the 1840’s some officers from the warship HMS Queen wore a crown on their caps and these were noticed by and favourably remarked upon by HM Queen Victoria during a visit to the ship. As a result the Admiralty issued an order for crown to be worn as a cap badge for all officers. With the changes to uniform regulations in 1856 a new badge was introduced not unlike the badge used by the RNZN today except the anchor was surrounded by an oval and the overall size was smaller. Today, the cap badge worn by officers is woven gold wire and consists of a fouled anchor surmounted by a crown and the lower part by oak leaves. Today’s officers cap is white plastic covered and has a black patent leather peak which in the case of senior officers has a embroidered oak leaf design all round for Flag Officers [Commodore and above] and the front edge only for Captains and Commanders.

WRNZNS Officer’s hats changed from the black rimmed style in 1942 to a black tricorne type around 1945 which is still in use by the RNZN. The badges were the same officer style but embroidered in blue thread. Later a white cover was introduced and today female officer hats are white plastic with black felt rims. their badges are gold and Commanders wear a thin gold band.

As senior rates, they wear a similar peaked cap to that worn by officers. The cap badge was given to CPO’s in 1879 when they changed uniform from the ‘Square rig’ [as worn by junior ratings] to a ‘Fore and Aft rig’ [as worn by officers] and consisted of a fouled anchor with an oval surmounted by a crown. In 1920 PO’s went to the ‘fore and Aft rig’ on attaining four year seniority and they were issued with the same cap badge as CPOs. A new badge was introduced for CPOS with a smaller fouled anchor surrounded by a laurel wreath. In 1970 a slightly larger form of this badge was introduced for the new rank of Warrant Officer. Khaki cap covers were worn with khaki uniform during the First and Second World Wars. If berets are worn metal badges are used. WRNZNS senior rates wore the tricorne hat with the appropriate badge.

Junior ratings wore low crowned cocked hats between 1720 and 1820 and there were developed into a waterproof tarpaulin hat similar to a boater but covered in tar from 1820-1857 [a possible origin of the name Jack Tar], Names of ships or ship’s badges were painted on. In 1860 a new sailor’s round cap was introduced which is still in use today. Cap tallys were introduced with the ship’s name in gilt letters. In tropical climates from 1860 a wide-brimmed straw had known as a Sennet became popular and remained in use until 1921 when they were withdrawn from issue. Solar Helmets [Pith helmets], were introduced in 1921 and remained in use for some time and are still used in the RN for ceremonial purposes by the RM. A new sun hat was introduced to the RNZN in 1991. Female junior ratings in the WRNZNS wore wide brimmed black felt hats from 1942 until 1945 when a flat black hat was introduced. Subsequently a white cover was added and the current issue was white plastic covered. Nowadays women wear the same caps as men if junior rates.

The latest headwear has been the introduction of the beret and the ball cap. The ball cap is for use by both officers and ratings.