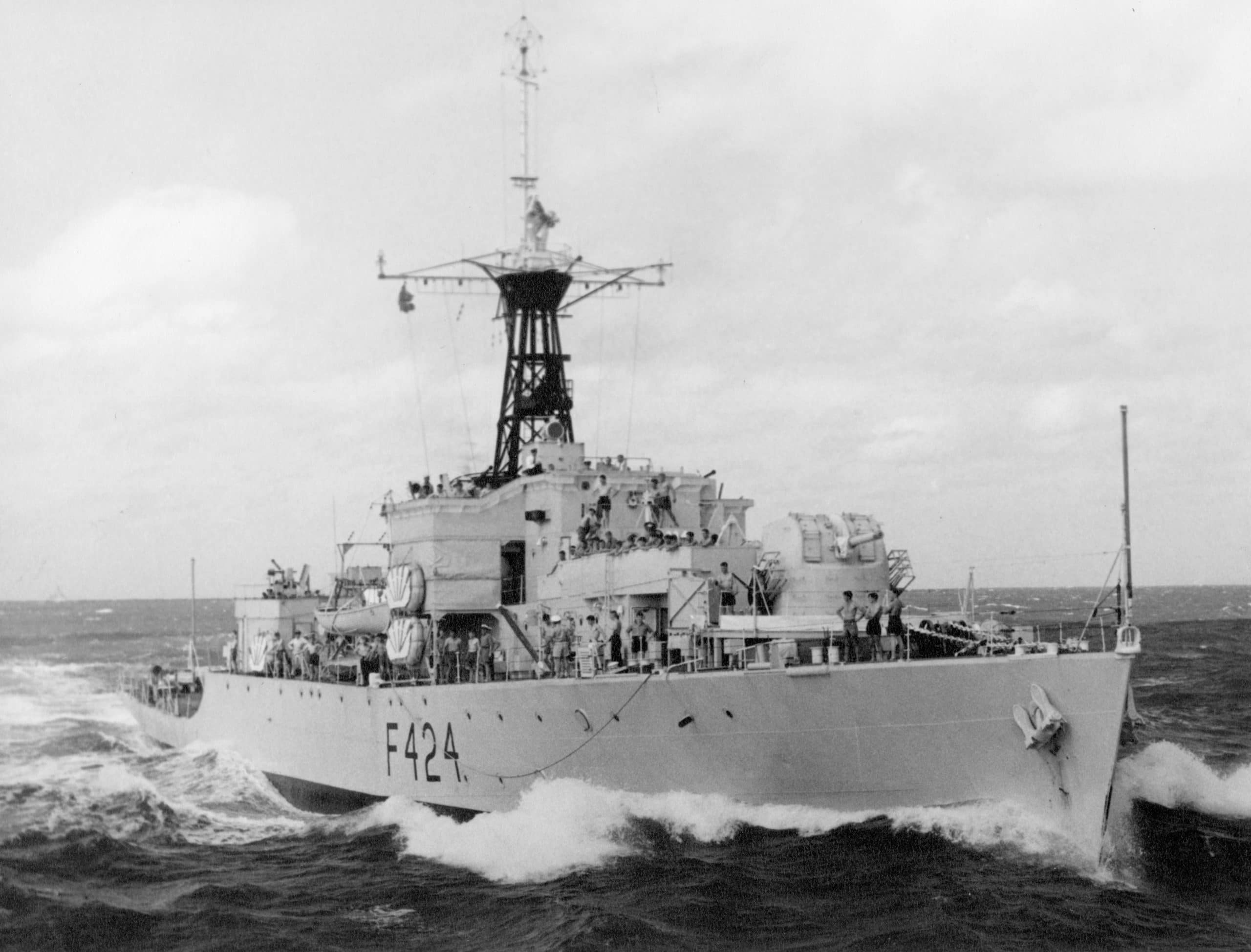 HMNZS Pukaki was a Loch-class anti-submarine frigate. She served in the North Atlantic as escort for inbound convoys to Britain. She also saw service in Korea, the Far East Station, Operation Grapple and Antarctica.

Decommissioning: Paid off 24 May 1965, sold September 1965. Left under tow from Auckland on 15 November 1965 by the tug Atlas along her sister ship Hawea. The ships arrived in Hong Kong for breaking up in January 1966 by Hong Kong Roller Mills.

The design of the badge of the Loch-class frigate HMNZS Pukaki was submitted by the ship and features the native swamp hen. Although known as the pukeko in most parts of New Zealand, this bird is known in parts of the South Island as pukaki. Lake Pukaki also features in the badge, represented by the chevron behind the bird. Lake Pukaki lies in the shadow of Aoraki Mount Cook, which is the highest mountain in New Zealand.

A later vessel, a Lake-class patrol craft, also used the badge and motto as well as the new Lake-class inshore patrol vessels that entered service in 2009.

After the official announcement of the name of the ship there was some confusion expressed as to the actual meaning of the word ‘pukaki’. Some thought it was simply a corruption of the word ‘pukeko’ while for others it brought to mind an alternative translation – pain in the neck. Naval staff were adamant, however, that that translation was ‘source of stream’, as quoted in Wises New Zealand Index. Final approval for the badge was given in February 1951

Pukaki: The river’s source – a lake in the central South Island.

Six Loch-class frigates served in the North Atlantic as escorts for inbound convoys to Britain. HMS Loch Achanalt was refitted at Sheerness where it was brought out of reserve, modernised and new armament fitted. The frigates were prepared to RNZN requirements. The ship’s company came from the corvettes HMNZS Arbutus and Arabis, which had been returned to the Royal Navy. The RNZN also recruited in Britain. In August 1948, the six frigates were designated the 11th Frigate Flotilla with the senior officer in HMNZS Taupo. Leaving Britain on 15 October 1948, four of the six ships arrived in Auckland on 5 January 1949. Initially HMS Loch Achanalt was to be named Manapouri. On the arrival of the four frigates in New Zealand, the NZ squadron was reconstituted and the senior officer was on HMNZS Bellona.

Korean Service: With the outbreak of the Korean War, NZ pledged two frigates to support the UN naval forces. Pukaki left NZ on 3 July 1950 and returned in December. This was her only deployment and was the shortest of all the frigates. At this time, the ships were on escort and blockade duties on the western coast of Korea as the UN tried to stabilise the situation on land. Pukaki was paid off into reserve on 22 December 1950.

Far East Station: On 19 August 1953 Pukaki was recommissioned and was the first ship to operate as part of the Far East Station. She left for Hong Kong in September 1953. Ships would operate from Singapore and Hong Kong and also monitored the Korean armistice. Pukaki had four 12-month deployments: 1953–1954, 1955–1956, 1959–1960 and 1961–1962. Prior to the last deployment, Pukaki was recommissioned after an extended refit in April 1961. When she returned to Auckland in June 1962, that ended the participation of the Loch-class frigates in the Far East Station.

Operation Grapple: Grapple was the thermonuclear testing programme carried out by the British at Malden and Christmas Islands in the Pacific. Pukaki was deployed as a weather ship at all nine tests from May 1957 to September 1958.

Antarctica: In December 1956, Pukaki and HMNZS Hawea escorted HMNZS Endeavour (I) from Bluff to the edge of the pack ice. She was modified to operate as a weather picket ship located at 60 degrees south, 170 degrees east, some 900 miles (1448 km) south of Bluff. She would be based here during the summer season. She also served as an emergency standby by American aircraft flying from Christchurch to Antarctica. She did five patrols, the last one ending on 23 February 1965.