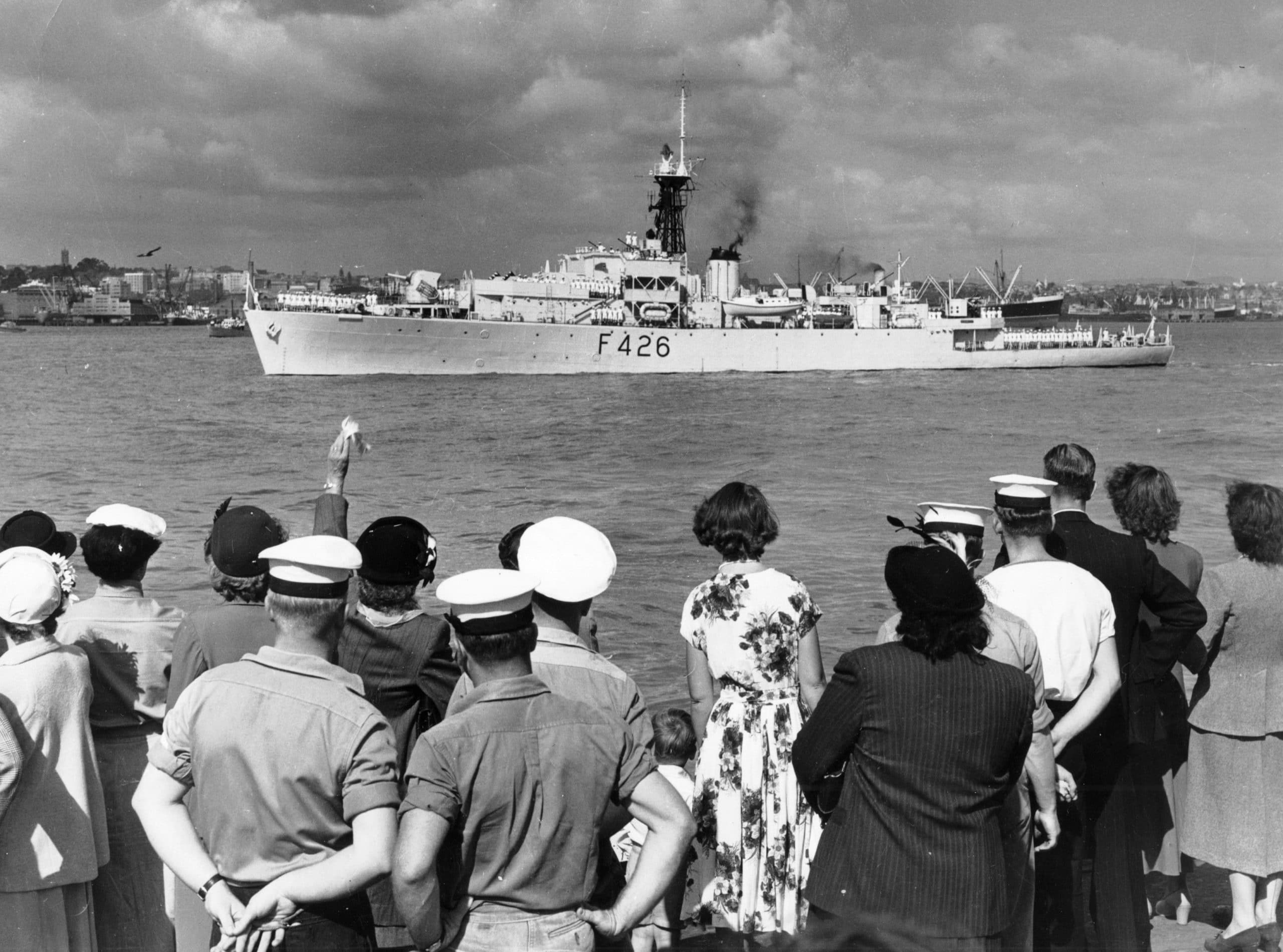 HMNZS Kaniere was one of six Loch-class frigates that the New Zealand government purchased in 1948. She was a Second World War design of anti-submarine frigate and had been commissioned into the Royal Navy as HMS Loch Achray in February 1945. She escorted convoys in the latter stages of the war across the Atlantic. After the German unconditional surrender in May 1945 she escorted U-boats from Germany to Loch Ryan. She was then sent to Singapore as part of the Royal Navy fleet resuming control after the Japanese surrender in August 1945. She returned to the United Kingdom in mid-1946 and went into reserve.

In February 1948 she was taken out of reserve to be sold to the New Zealand government. The ships were to be refitted before they entered service with the RNZN. The refit took place between July and August at HM Dockyard Portsmouth.  Harbour trials were conducted in September. Kaniere cost the government £232,750. She was renamed Kaniere[1]by the wife of the C in C Portsmouth Lady Willis on commissioning into the RNZN on 28 September 1948.  Lieutenant T.W. Stocker RN commanded the ship for its commissioning, trials, work-up, and passage to New Zealand.

In October 1948 Kaniere joined the Mediterranean Fleet for a work-up for operational service. This was completed in November 1948. She then detached from the fleet for passage to New Zealand arriving in Auckland in January 1949 and joined the 11th Frigate Flotilla based at Devonport.

Between February and August 1949 Kaniere carried out a Pacific Ocean patrol and visited Fiji and Samoa. Her first commanding officer was Lieutenant-Commander S.F. Mercer who had fought at the Battle of the River Plate as a rating aboard HMS Achilles. From September to December Kaniere was deployed to Australia for joint exercises with the RAN. Commander C.C. Stephens, Senior Officer 11th Frigate Flotilla was the commanding officer.

From January to August 1950 she remained in New Zealand waters and carried out training and exercises while also conducting port visits. Her commanding officer was Lieutenant D.B. Holdsworth RN. In September 1950 she entered the dockyard at HMNZ Philomel for a refit. It had been intended to send Kaniere back to the Mediterranean as part of the exchange service with the Royal Navy but HMNZS Hawea was sent instead. By December the refit was completed and she was deployed for Flotilla duties.

In September 1951 she carried out another Pacific patrol with visits to Apia, Ellice Islands, Rotuma, Suva and Tonga returning to Auckland in October. At this time she was nominated for reduction to Reserve Status. Under her commanding officer Lieutenant A.G. Rhodes she was paid off in November 1951 and reduced to Reserve at HMNZ Philomel. She remained laid up until October 1952.  In November 1952 she was recommissioned for service in the 11th Frigate Squadron under Lieutenant Rhodes and in December 1952 deployed for Flotilla duties and work-up.

With the outbreak of the Korean War the New Zealand government offered the services of the Loch-class frigates to the United Nations Naval Force. All six Loch-class frigates served tours of duty off the Korean coast from 1950 to 1954. The frigates served under RN and USN command as part of the United Nations naval forces operating off the Korean coast.  In January 1953 Kaniere was prepared for operational service and nominated for detached service with the UN Naval Task Group based at the port of Sasebo, Japan.

On Monday 3 March 1953 Kaniere departed Auckland for her deployment to Korea under the command of Lieutenant Commander L. G Carr. She would relieve her sister ship HMNZS Rotoiti who had completed two deployments to Korea.  She arrived at Sasebo on 23 April 1953 to commence service. She departed the next day to carry out her first patrol of the west coast of Korea. HMNZS Hawea was also deployed at this time.  Kaniere was the last of the Loch-class frigates to be sent to Korea to serve full time under the UN.

During May 1953 she carried out patrols and naval gunfire support. This fire support included providing cover for a minesweeping operation and the evacuation of wounded South Korea guerrillas from Chodo Island off the west coast.  Later in the month Kaniere provided support to a USN vessel in the Regency Channel and came under fire from North Korean batteries ashore. She returned to Sasebo and then on to Hong Kong joining with HMNZS Hawea. At this time both ships took part in Commonwealth celebrations and were inspected by the Commander in Chief, British Forces in Korea. On 15 June Kaniere had resumed patrol duties off the west coast of Korea.

In July 1953 Kaniere was on patrol when the Armistice was being negotiated. She was deployed to evacuate South Korean partisans from outlying islands above the 38th parallel which was proposed to be the armistice line for the UN and the North Korean/Chinese forces.  She also provided naval gunfire support to operations against North Korea. Both Kaniere and Hawea were involved in heavy bombardments of enemy guns positions, bunkers and defensive positions right up to the ceasefire.

With the declaration of the cease-fire on 28 July 1953 Kaniere returned to Sasebo but was kept there as part of the UN naval force. From August 1953 to January 1954 Kaniere patrolled of the west coast of Korea in support of the ceasefire while the Armistice was negotiated. Commonwealth naval forces were based in Hong Kong and provisioned from there. Fuel oil was provided by RFA tankers or USN tankers as required.

In January 1954 she was nominated to return to New Zealand and by March 1954 was back at Auckland her deployment to Korea ended. All the Loch-class frigates had a hard and monotonous role in Korean waters. There were no naval battles or defending UN convoys against enemy attack but denying the sea to the North Korean and Chinese forces while making use of the naval supremacy of the UN forces was essential work for the New Zealand frigates.

In July 1954 she was deployed as part of the Royal Navy’s Far Eastern Fleet. She carried out anti-piracy operations in British North Borneo waters and visited Malayan, Hong Kong, Japan, and Korea as part of her service with the fleet. She returned to Auckland on 23 July 1955. In 1958, she was made a training frigate and remained so until she was paid off in 1960. In 1961 she was an alongside training ship which she did for further five years being sold in 1966 and broken up in Hong Kong.

Her 4-inch (102mm) gun was retained by the RNZN and used for gunnery training up at the naval camp at Whangaparaoa.  In 1968 the gun was handed over to the MOTAT museum in Auckland. This has been returned to the Navy Museum and has been refurbished. It presently is storage at HMNZ ­Philomel.

The ship’s badge was designed by the ship’s company and features one of the world’s rarest birds the Kakapo a ground dwelling type of parrot. The early Maori settlers found large flocks of Kakapo on the shore of Lake Kaniere.

[1] The ship was originally to be names HMNZS Haipo but this was changed prior to the ceremony.