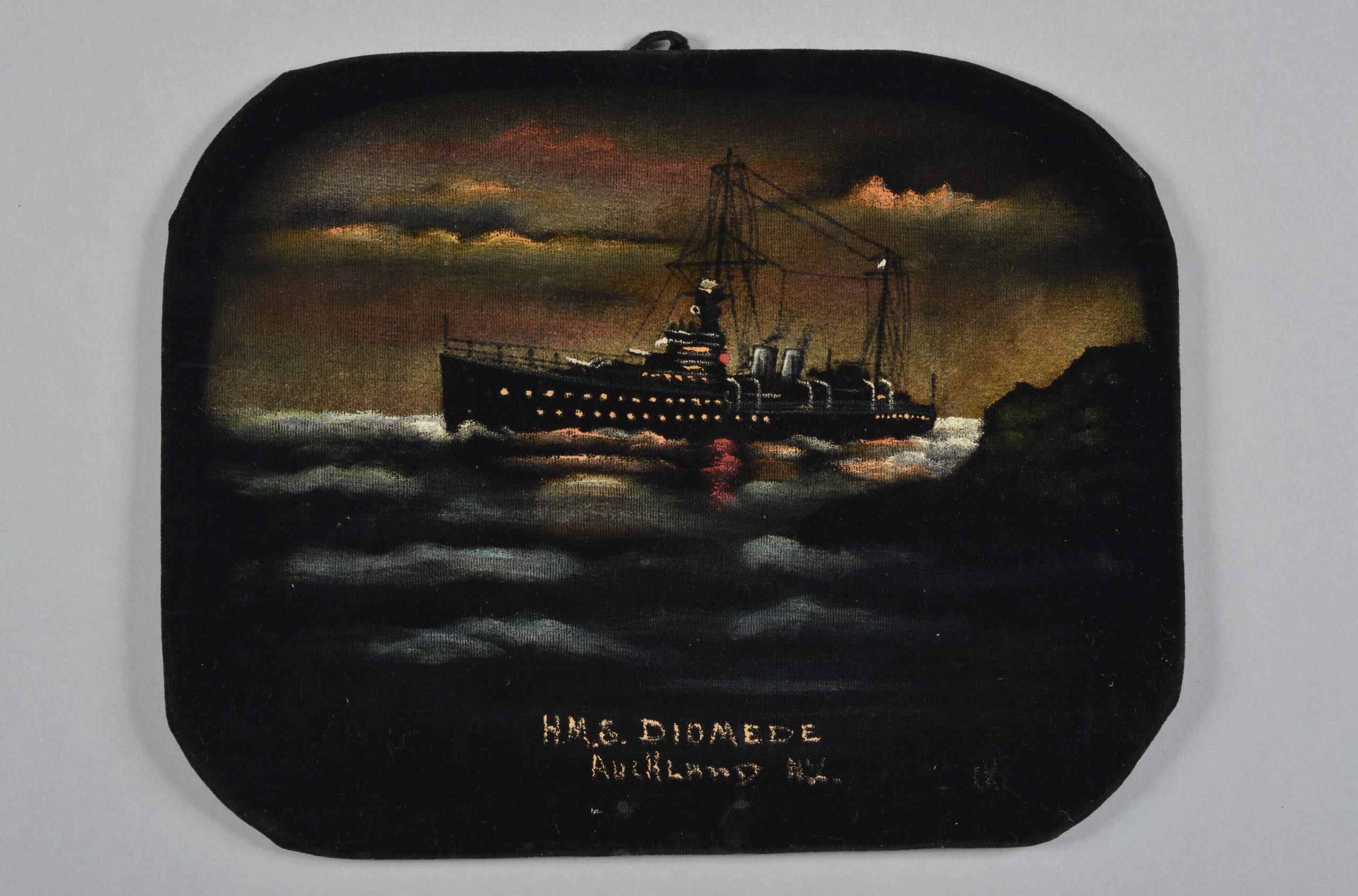 This small but striking artwork from our collection is an oil on velvet painting of HMS Diomede in Auckland during the 1930s. While an unusual medium for painting, painting onto a velvet background is actually an old technique that has a long history.

Traditionally, velvet was made entirely from silk. As the production of silk expanded across Asia, trade with the West brought silk along the Silk Road, through the Middle East to Europe. It was through Persian weavers that velvet made its way to Europe. Persian weavers used special looms to form a new type of fabric from the silk that involved weaving together separate pieces of silk that were then cut apart to create a short dense ‘pile’. This new fabric became known as velvet.

During the medieval era, velvet was incredibly difficult and costly to make. It was seen as a luxurious fabric that was so expensive it became known as the ‘Royal Cloth’. Royal families used it to make furniture and clothing, especially those which would be used in a display of opulence and status such as wedding dresses and christening gowns. During this time, European artists also painted on velvet to recreate the look of woven medieval tapestries. As European empires spread across the world, they brought velvet with them and various cultures began their own traditions of painting on it.

With the invention of industrial looms, velvet became less expensive and fibres cheaper than silk began to be used to make it. It became more widely available and there was a trend during Victorian times to paint still lifes on velvet. By the 1930s, paintings on black velvet were a commodity. For example, the New York manufacturing company FAMCO advertised hand panted panels on black velvet for $25 each. It was in the 1930s that the first great master of black- velvet painting Edgar Leeteg began his work. Although rarely considered ‘high art’ velvet paintings continued to boom in popularity, becoming massed produced by the 1970s.

The appeal of painting on black velvet is not only because of its interesting texture but the especially dark background really makes the colours pop. It is also quite a difficult technique to master and requires a skilled artist. As the nap of the fabric acts as a sponge, one careless stroke of the brush can easily ruin a work. As velvet is a textile, it is especially prone to light damage. Sunlight is extremely detrimental to velvet paintings as it can cause irreversible fading to the black velvet. Velvet is also very difficult to clean because of the ‘pile’ effect of the fabric.

This piece is not signed or dated and the artist remains unknown. The donor believes it was painted by a sailor who was serving on board Diomede in the 1930s.

There is red backing paper on the reverse and a loop for hanging along the top horizontal edge which suggests the painting was possibly displayed at some point in its history.