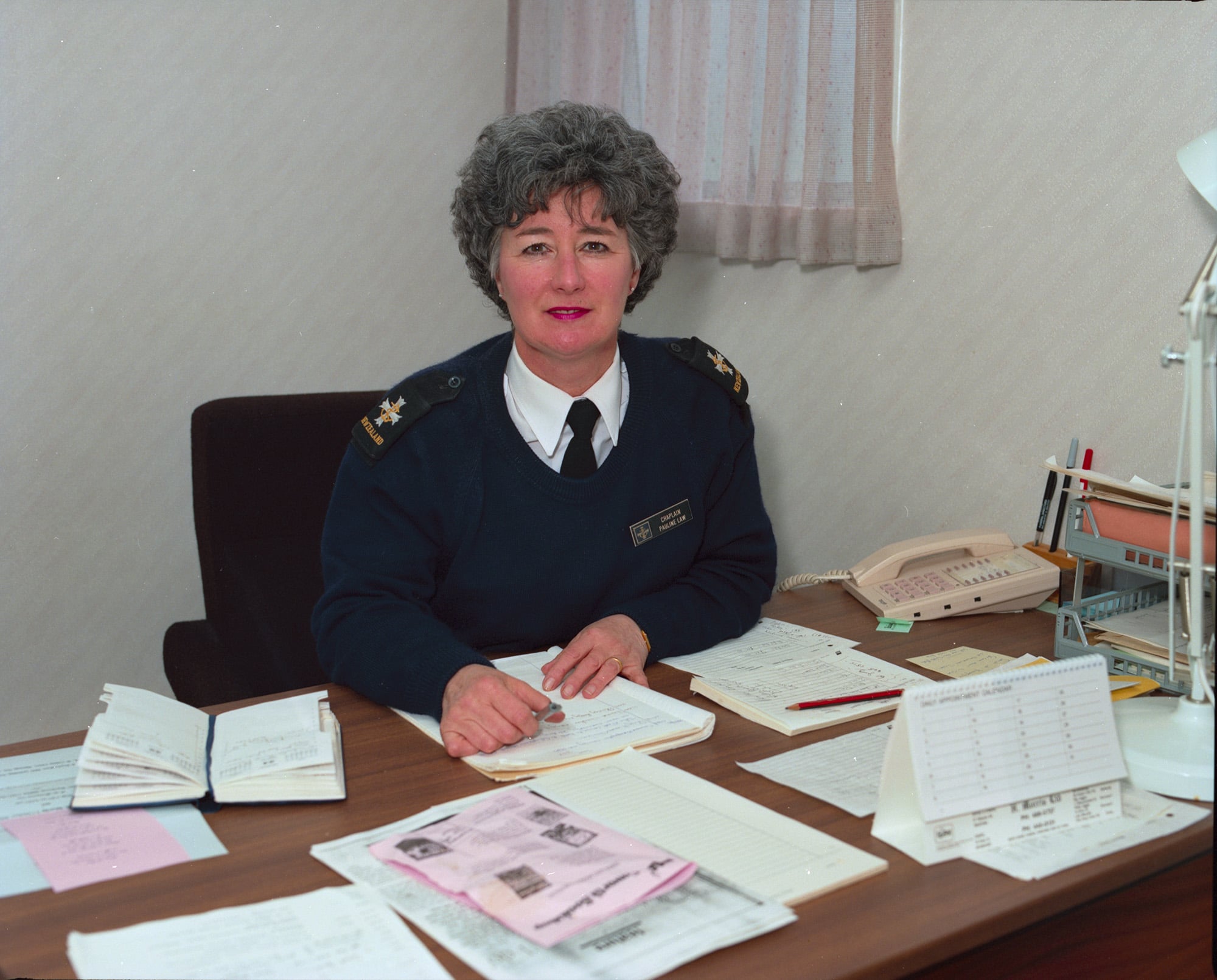 In celebration of International Women’s Day 2022, and in the spirit of this year’s focus to #BreaktheBias, we would like to highlight the achievements and career of Principal Chaplain Pauline Law ONZM (Rtd).

In 1990, Pauline became the first female chaplain in the Royal New Zealand Navy (RNZN). She was, in fact, the first female military chaplain in the Commonwealth. Born in Lancashire UK in 1945, Pauline immigrated to New Zealand in 1966 with her husband. They spent most of their time in the Bay of Islands, where Pauline’s husband was a vicar, and raised six children together. After being actively involved in the ministry for some time, Pauline began her theology studies and was officially ordained in the Anglican Church in 1984.

When she initially applied to the RNZN in 1988, she was told that the Navy did not employ women in chaplaincy. Although the Women’s Royal New Zealand Naval Service (WRNZNS) had been disbanded in 1977 and women could join the regular force, they still formed a minority and could not serve at sea. However, by 1989 the Navy were in the early stages of allowing women to serve at sea, and thus wider roles became open to women. The Navy wrote to Pauline inviting her to interview for a position, which she accepted.

Despite being non-combatants, chaplains still complete all aspects of Junior Officer training (including weapon handling), and must pass all medical and physical requirements to serve. Navy chaplains are responsible for religious and ceremonial services, such as baptisms, weddings, funerals, and ministry. However, they are also very involved in pastoral care to nurture morale and wellbeing. Counselling and education are an integral part of the role of Chaplain. These responsibilities also extend to civilians on base and families of serving personnel.

Over her career, Pauline became especially known for her generous spirit. In particular, she worked extensively with veterans and families, provided support for female victims at court martials, and organised care packages and mail for those serving overseas. However, Pauline initially found there were barriers that made serving at sea more difficult compared to her male counterparts. Women could only serve on HMNZS Monowai and Tui at the time, as there were no arrangements for women on the frigates e.g. female bathrooms. Pauline recalls, “…I went on Southland, but I was the only woman and I didn’t like being the only woman. You felt as if you stuck out you know, like a sore thumb type of thing.” Over time, the requirement for Navy chaplains to serve at sea began to shift.

Pauline became the Principal Chaplain at HMNZS Philomel in 1996, and it was during this time that two highlights of her career took place. The first was her leadership of the renovation of the Navy Chapel. Originally there was a small chapel attached to the gymnasium but it could only hold six pews. When the new gymnasium was built, there were talks of pulling the old building down. However, Pauline fought to instead renovate the old building and expand the existing Navy Chapel. She met a lot of opposition from the Navy and even from within the chaplaincy team as many believed the money could be redirected somewhere else. However, as the old chapel had been built in 1943, in memory of fallen sailors, Pauline strongly believed in both the religious and historical significance of the site. Pauline recalls, “Well, we had an awful argument, a really big argument over it. And I actually went and had all the pews screwed down because I thought that they would do it over my head.” She persevered with the project despite antagonism and it proved to be a worthwhile fight. After its renovation, weddings and baptisms were frequently held in the chapel as well as funerals for veterans. It became a sacred memorial, home to significant naval memorabilia and a place to reflect and honour those who served before.

The other most important achievement of Pauline’s career was her role in establishing the day-care for children under two years of age. Pauline recalls, “One of the things that I picked up….was the number of women who were leaving the service and were leaving because of childcare issues….the cost of day-care was too much….” As part of her role as the Women’s Coordinator, Pauline implemented the idea of a day-care to help retain female staff immediately returning from maternity leave. She and her team were given a house to renovate and make fit for purpose as a day-care. Pauline recalls, “…that did take a long time, a lot of work and a lot of effort…..that was a big project, I used to put hours into my job because I still had my chaplaincy work to do.” It was christened Tamariki House and cared for children aged six months to two years. They had a waiting list straight way. However, there was some pushback, as Pauline remembers, “Not everybody agreed with it. Some senior officers would say, “Oh my wife stayed at home.”” Tamariki house has been full since it opened in 1998.

During her time in the Navy, Pauline witnessed not only resistance to women being in the military but also to women working in chaplaincy. Sometimes the pushback came from other military chaplains. Pauline recalls some of the problems she faced, “I know when I first started it was a little bit difficult…..If you would talk or say things it wasn’t acknowledged or accepted. Not all the time, but enough ‘til you start thinking, hey I’m not being as heard as much as the others.”

However, during her career with the Navy, Pauline describes the important changes in naval culture that began to take place, “When I first started there were women officers and the Wrens had been finished for a considerable length of time, but there were only small numbers. There were very small numbers and I don’t think that their voice was really heard when things were being planned or organised. But over the years like, when I first came in, it was the first intake of women midshipmen and over the years as those women became more senior, completed more courses and they undertook more roles. And I think it was just by sheer numbers [that change was achieved]……I think women ceased to be the novelty, which takes the pressure off you and takes the pressure off everybody else. In ten years the shift was huge.”

Pauline retired in 2006. By being at the forefront of change and demonstrating that she could not only do the job, but excel, Pauline helped pave the way for gender equality in the Navy. For more information on International Women’s Day please visit their website www.internationalwomensday.com