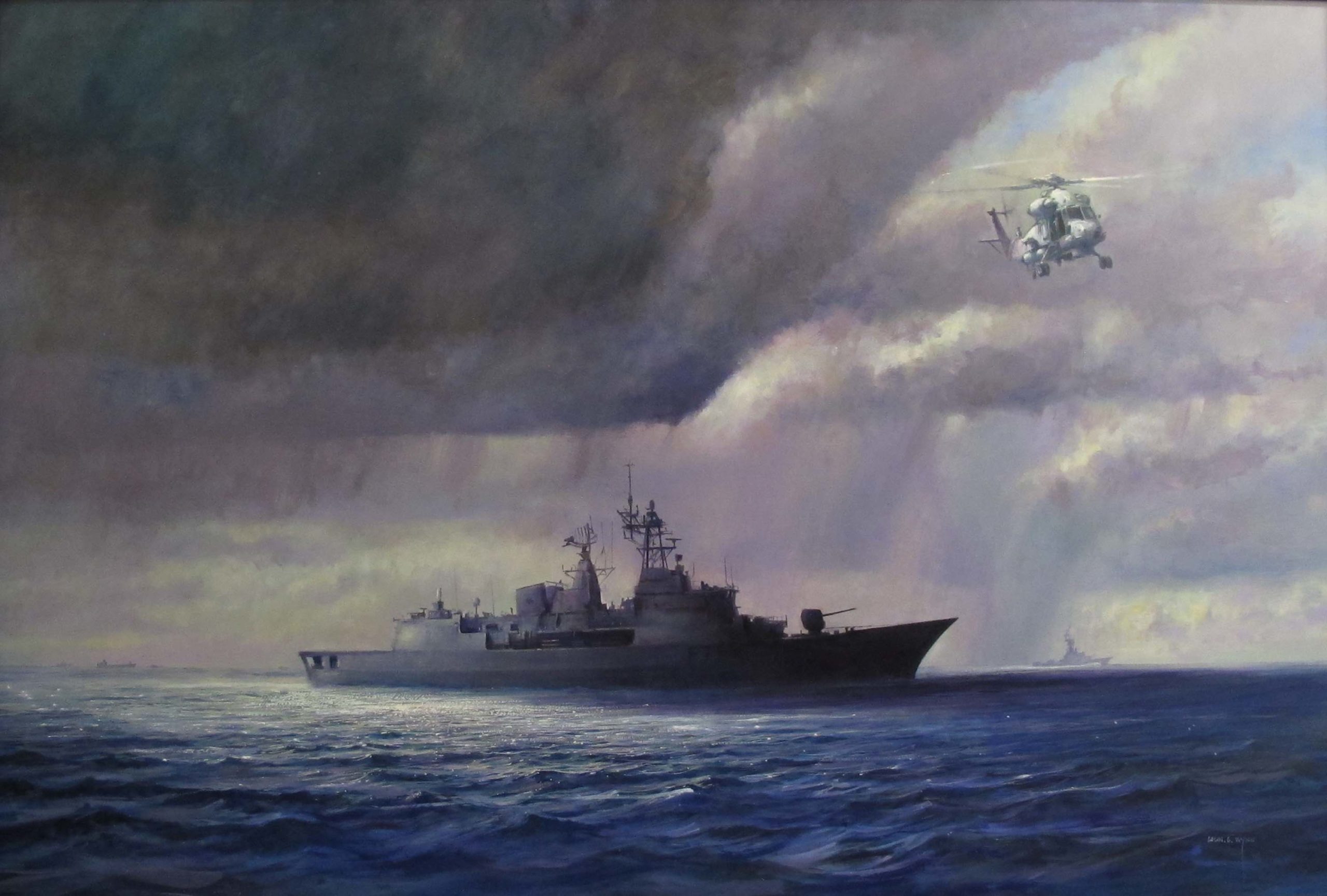 Reference no. FT 1114
Te Kaha and Seasprite participating in a FPDA exercise in the South China Sea in 2004. Painting by Colin Wynn

The Five Power Defence Arrangements (FPDA) were established on 1 November 1971 between Australia, Malaysia, New Zealand, Singapore, and the United Kingdom. It is currently the only standing multilateral defence agreement in Southeast Asia and is the second oldest military agreement in existence after NATO. The arrangements were established in the wake of decolonisation and independence movements in Southeast Asia, and the subsequent removal of British forces East of the Suez Canal. The FPDA was initially thought of as a transitional authority providing collective security to Peninsular Malaysia during the early decades of Singapore and Malaysia’s independence from the United Kingdom. However, the relationship between the five powers has persisted. Due to the peninsula’s strategic position between the South China Sea and the Indian Ocean, security of the peninsula provides security to the region as a whole and can also be seen as security of the Northern approaches to Australia and New Zealand.

The FPDA is not a formal agreement or alliance, as is evidenced in the wording of its name being a set of arrangements. The arrangements primarily provide for consultation between the five powers. There is a responsibility of the external powers (NZ, AUS, UK) to consult with Malaysia and Singapore in the occurrence of a military or security threat to the region. Regular meetings of the Chiefs of Defence (every two years) and Ministers of Defence (every three years) ensure that the consultative aspects of the arrangements are maintained, and that any threats or concerns are addressed as they arise. The FPDA is guided by principles of maintaining a non-threatening stance in the region and ensuring its objectives evolve at a comfortable pace to remain relevant throughout time.

While the FPDA was set up as a consultative arrangement, there has been an ongoing military commitment by the five powers. The primary defence component of the FPDA is the Integrated Area Defence System (IADS). In the early years of the FPDA the focus was primarily on air defences, and thus the IADS was initially the Integrated Air Defence System. The IADS Headquarters (HQIADS) is based at the Royal Malaysian Air Force (RMAF) Butterworth military base in Malaysia. The IADS has a heavy involvement from the Royal Australian Air Force (RAAF) and has always been commanded by a senior member of the RAAF. The RAAF periodically supplies fast jet detachments to RMAF Butterworth. In recent decades the defence capabilities of the IADS have expanded across all services and thus the RNZN has played an increasing role in supporting New Zealand’s commitments to the FPDA.

The five power nations conduct military warfare exercises on a regular and ongoing basis. The exercises aim to exercise FPDA forces in the conduct of combined joint maritime, air, and land operations for the defence of Peninsular Malaysia and Singapore. The exercises have the added benefits of maintaining relations between the five powers and maintaining interoperability and preparedness between military forces in case of future conflicts in the region.

Exercise Bersama Shield has its roots in the Integrated Air Defence System (IADS) Air Defence Exercise (ADEX) which was established in the early stages of the FPDA. ADEX was renamed Bersama Shield in 2004. While primarily an air defence exercise, the evolution of the security environment has seen an increased requirement for naval forces to participate in and support the exercise. The RNZN regularly contributes a frigate and replenishment tanker to Bersama Shield.

Exercise Starfish was an FPDA maritime exercise held annually off the coast of Malaysia and Singapore. It was inaugurated in June 1981 and was developed to further expand the FPDA’s capabilities away from the initial focus on air defences. The exercise focussed on conventional naval warfare activities. HMNZ Ships Otago (i) and Waikato (ii) participated in the inaugural exercise.

In 2004 the FPDA endorsed a set of proposals to expand their remit to include responding to non-conventional security threats such as maritime terrorism and piracy. Subsequently Exercise Starfish was renamed to Bersama Lima and has evolved to address these non-conventional threats. The exercise is now held biennially and aims to conduct combined joint operations in a multi-threat scenario.

HMNZS Ships Te Kaha and Aotearoa participated in the 2021 exercise which was renamed to Bersama Gold in honour of the FPDA’s 50th anniversary.

Exercise Flying Fish is an integrated maritime and air exercise conducted triennially. The Exercise was inaugurated in April 1997 and combined the existing maritime and air defence exercises (Starfish and ADEX) that are ordinarily held back-to-back each year, into one major exercise.

Flying Fish 2000 was held 3-17 July 2000. The RNZN’s contribution to the exercise was HMNZ Ships Canterbury (i), Endeavour (iii), and Manawanui (iii), as well as the Navy Diving Team.

Exercise Stardex is a joint maritime and air exercise conducted annually. From the success of the major combined services Exercise Flying Fish in 1997, Stardex was created as a continuation of Flying Fish at a reduced scale and is held annually except in Flying Fish years.

Stardex 99 was held 1-12 September 1999 and hosted in Malaysian waters. HMNZ Ships Te Kaha and Endeavour (iii) represented New Zealand at the Exercise, Endeavour being the only tanker in attendance.

Exercise Bersama Padu is a joint services Command Planning Exercise involving land, sea, and air forces. It was inaugurated in 2006 running from 5-22 September. The exercise is scheduled to take place every four years. The aim of Bersama Padu is to exercise in a multi-threat environment with a focus on defending trade routes also known as Sea Lines of Communication (SLOC). It was also the first FPDA exercise to include a logistics/supply element. The RNZN contribution to the inaugural exercise included HMNZS Endeavour (iii), HMNZS Te Kaha, and a team of divers.