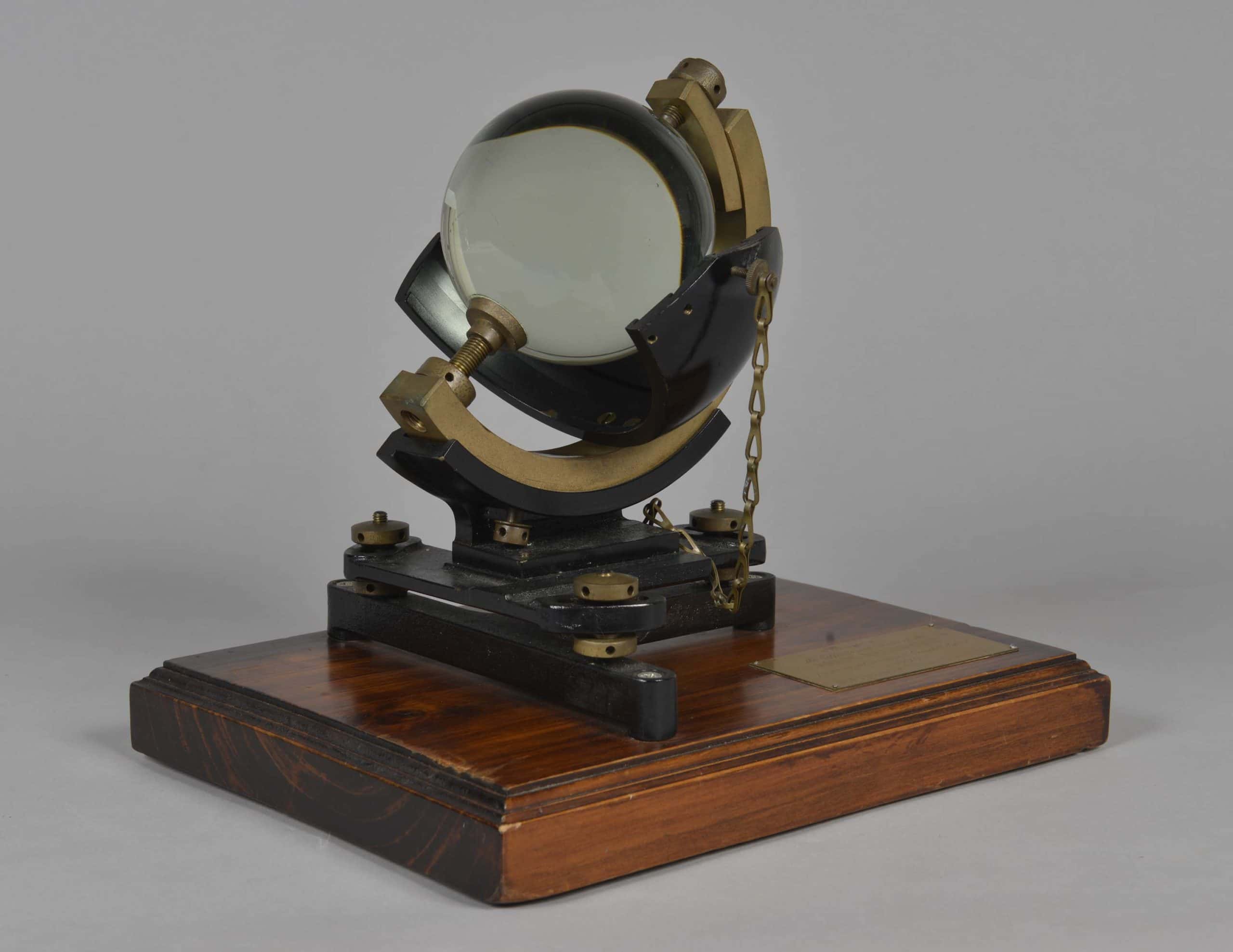 The Campbell-Stokes sunshine recorder MKII, Model 5156 consists of a glass sphere suspended in a metal frame. It is designed for a strip of specially designed paper or card to be inserted into the frame behind the sphere. When the sun shines through the sphere it burns the paper, giving a recording of the amount of sunshine a particular location receives throughout the day. Manufactured in 1956 by Casella (London) Limited.

This sunshine recorder was presented to HMNZS Manawanui in 1990. The gift came from the New Zealand Meteorological Service to thank the ship’s company for annually servicing the weather station at Campbell Island. Manawanui was not the first ship to deliver supplies, mail and personnel to the island. The first recorded supply run was undertaken by HMNZS Kiwi in the summer of 1948.

Campbell Island is a sub-Antarctic World Heritage Site situated 700 kilometres  south of Bluff. During the latter part of the 19th century, and the early part of the 20th, the island was home to sealers, whalers and farmers. After decimating the native mammal populations the hunters moved on – the farmers stuck it out for a while longer, but in 1931 they too gave up due to the isolation, transport, difficulties and tough environmental conditions.

New residents for the island

The advent of World War Two saw the island populated again. In 1939 HMS Leander (later to become HMNZS) sailed to Campbell Island and the Auckland Islands in search of German raiders. The first official observers to stay on the island arrived in 1941, their primary role also being to watch for enemy ships.

After the war the island continued to be home to a rotation of personnel who observed and recorded the climate and weather patterns. Up until 1995, a weather station was staffed by a group of scientists and support crew who stayed on the island for up to a year before being relieved by a freshly enthusiastic team.

The Campbell Island weather station relied on RNZN and merchant ships to transport food, mail, people and equipment. After the closure of the weather station, the RNZN continued to support the Department of Conservation in its work to upkeep the island.

In 2001, a massive project was undertaken to completely eradicate rats – RNZN was part of the support crew for this project. In 2009, HMNZS Te Kaha transported all the supplies needed for DOC to build a boardwalk around the island. Large sections of prefabricated boardwalk were airlifted from ship to shore by a Seasprite helicopter. Today the Offshore Patrol Vessels Otago and Wellington patrol the sub-Antarctic islands, transporting supplies and personnel for DOC and the MetService.

We will never know for sure, but I like to think that our sunshine recorder was used by the scientists on Campbell Island as they measured the meagre 650 hours of bright sunshine the island sees yearly. However, regardless of where or when it was used it still tells the story of RNZN role as part of a large team of New Zealanders that care for our unique and treasured natural habitats.

The image shown here is by Tudor Collins circa 1940s shows a sailor inspecting a sunshine recorder. We do not know where this image was taken, but we’re presuming it’s not Campbell Island as the sub-Antarctic climate is not ideal for being topless… where ever he was it’s possible that he was recording the best time of day to get a tan.