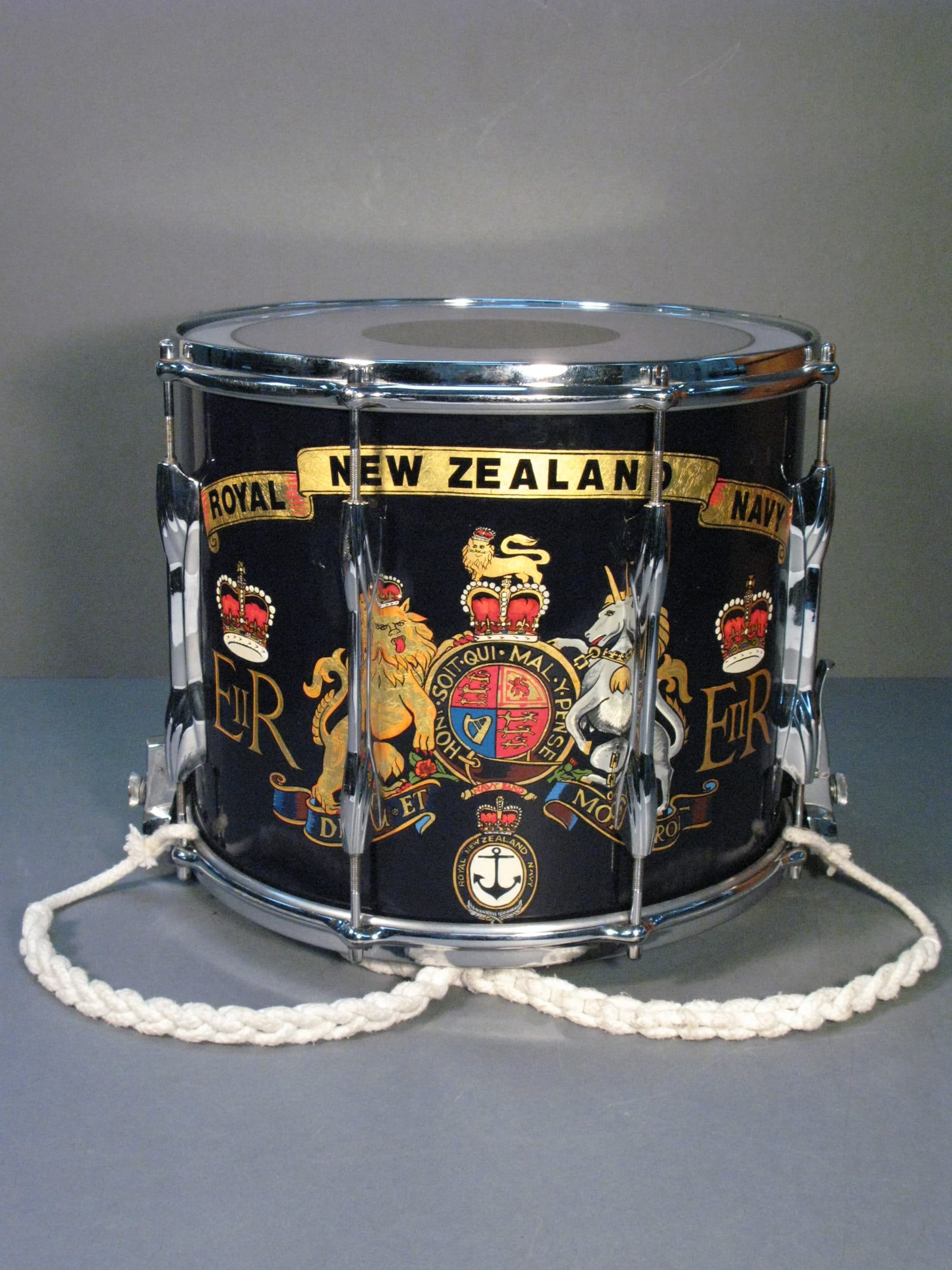 The drum has always played a special role in the military. They have been employed in battle for centuries to rally troops, intimidate the enemy, and to send signals.

Drums are also used for military drills – primarily for setting a marching pace – and communications; a military tattoo was originally a drum signal to mark soldier’s curfew.

In more recent times, drums have formed part of military concert bands whose role is to provide music for ceremonial, public relations, and entertainment requirements.

This drum was used by the Royal New Zealand Navy (RNZN) Band. It is a side drum, designed to be carried by its straps while marching and played with two drumsticks.

It is one of two drums that have been in the museum’s collection for many years.

However, in October 2011, these two drums were temporarily returned back to the Navy Band; not to be played, but to take a starring role in noteworthy event.

Saturday 1 October 2011 marked the 70th anniversary of the establishment of the RNZN. Senior naval officers and dignitaries assembled at the Houses of Parliament for the presentation of the new Queen’s colour by the Governor General.

The Queen’s (or King’s) colour is a special flag, in this case a White Ensign emblazoned with the Royal Cypher, which was first granted to the New Zealand Naval Forces by the monarch in 1926.

The changing of a colour is a special event – the New Zealand Navy Sovereign’s colours have previously been changed in 1937, 1953, 1970 and 1991 – which is marked by a ceremony governed by tradition and strict protocols.

Upon its presentation the new colour is draped across a stack of drums and then blessed.

In 2011, this stack was built from current band instruments supplemented by the two drums lent by the museum.

The custom is a deeply symbolic one, apparently harking back to drums being draped with a regiment’s colours to create an altar on the field of battle.

Following the ceremony the drums were safely returned to the museum and are now on public exhibition in the museum galleries. The current Queen’s colour is displayed at the Devonport Naval Base and is only paraded on special occasions.

Further information about the King’s/Queen’s colour can be found on the museum website:
https://navymuseum.co.nz/explore/by-themes/customs-and-traditions/monarchs-colour/

The 70th Anniversary colour parade is available to be viewed on youtube:
https://www.youtube.com/watch?v=BQw3ddYn3rw