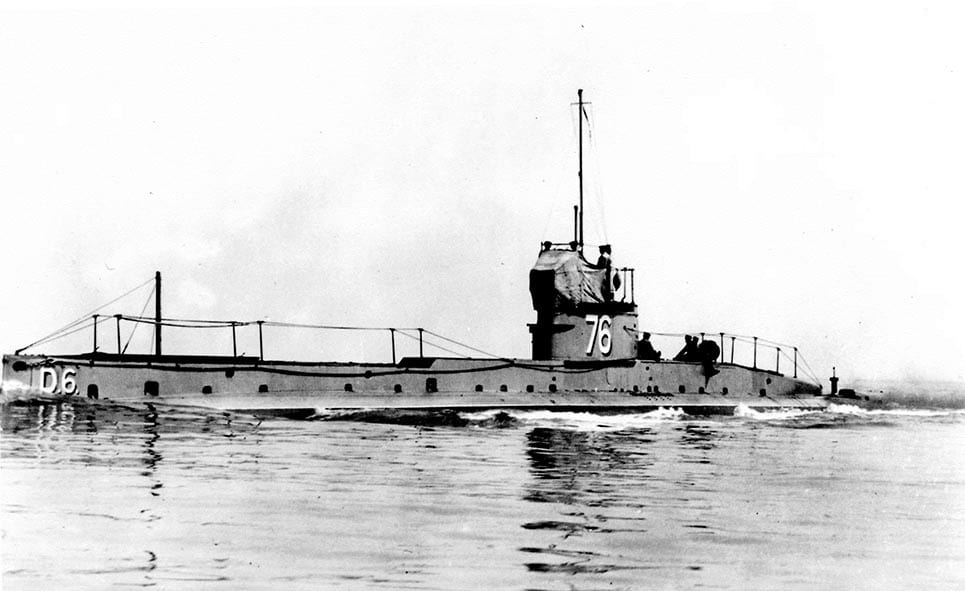 By 1917 Britain was in danger of losing the war because the shipping on which the country survived was being sunk at a greater rate than it could be replaced, by German submarines.

Countering the submarine threat was a complex challenge, with hundreds of ships, vessels and aircraft employed hunting submarines and also leading to significant scientific developments.  New Zealanders were involved in all areas of this aspect of the war.

One of the new weapons of WWI was the submarine and it quickly proved its effectiveness, becoming the major threat to British shipping in the early years of the war and came close to winning the war for Germany by 1917.  Countermeasures of various sorts were developed, some more successful than others.

The first anti-submarine measures were passive in nature comprising nets. Starting in February 1915, a series of indicator nets was laid across the Straits of Dover.

These were supplemented by mines and destroyer patrols.

It quickly proved its effectiveness, claiming U8 on 4 March, resulting in German submarines temporarily avoiding the English Channel.

Supplementing the nets was an extensive network of minefields.  These were laid around the British Isles and throughout the Mediterranean.

Apart from the Dover Barrage, there was another from the north of England to Norway and another across the Adriatic from Otranto.  In a post-war analysis of U boat losses, mines accounted for at least 94 of the 202 U boats sunk.

In WWI what was called ‘dazzle’ camouflage was developed.  This resulted in ships being painted in what now seem bizarre patterns designed to confuse a submarine as to the direction in which the ship was heading, as well as its size and speed.

The final passive measure against submarines was camouflage.  In WWI what was called ‘dazzle’ camouflage was developed.  This resulted in ships being painted in what now seem bizarre patterns designed to confuse a submarine as to the direction in which the ship was heading, as well as its size and speed.

Throughout the war submarines had to spend most of their time on the surface, because submerged they relied on battery power for propulsion which resulted in low speed and short endurance.

Thus on the surface they could recharge their batteries and proceed at higher speed.  Additionally the submarine’s conning tower being higher out of the water than a periscope meant that ships could be sighted further away when on the surface.

The first offensive measure against the submarine threat was by instituting patrols by surface ships and aircraft.

However, in the event that a submarine was found, destroying it was not easy.  Gunfire was at first the only longer range method, but was only effective while the submarine was on the surface.

Ramming was also effective if the vessel could get close enough before the submarine submerged, but usually also resulted in major damage to the patrol vessel.

Later depth charges were introduced which gave the possibility of sinking a recently submerged submarine.

As the war progressed special patrol vessels were introduced, including Motor Launches in which a number of New Zealanders served and the ‘P’ and ‘Kil’ class patrol boats.

Aircraft patrols by the RNAS against submarines began early in the war and as more aircraft and airfields became available the North Sea was divided into a grid, resembling a spider’s web.

When on patrol the aircraft would be directed to patrol specific sectors of the grid. To destroy any submarine they found, small bombs were carried.

These carried concealed guns and were known as Q-ships or submarine decoy ships.  Although manned by men of great courage and dedication the 139 or so decoy ships only sank ten submarines.

The first effective anti-submarine weapon for use against a submerged submarine was the depth charge.

The depth charge was an iron drum containing 150 pounds (68 kg) of explosive, activated at a pre-determined depth.

At first the depth charge was activated by a rope, setting off the charge when it came taut, but a hydrostatic pistol was soon introduced.  Motor launches also carried what was called a lance bomb.

These were grenades, resembling pineapples on the end of a broom stick.  One New Zealand officer later recalled that he was unable to determine how these could be used without eliminating the user.

Means of detecting submarines underwater was a major challenge

and a section of the Board of Invention and Research, under Sir Ernest Rutherford tackled this problem.

The first practical device was the hydrophone, which when lowered into the sea

could detect the sound of a submarine’s engine and the direction in which it lay.

There was however, no means of determining distance.

By 1918, a primitive means of detecting a submarine by use of a pulse of sound had been devised and the first set was at sea just prior to the Armistice.

Known as “ASDIC” (Anti-Submarine Detection Investigation Committee) until the term was superseded in the 1960s by the American “Sonar” (Sound Navigation and Ranging) this device was not fully operational until 1924.

Other means of detecting submerged submarines, by the use of sea gulls and later sea lions, although tried, did not prove practical.

By mid-1917, the solution to the ever increasing number of ships being sunk by submarines had been implemented.

Although strenuously opposed by the First Sea Lord, Admiral Jellicoe and leading to his dismissal, the convoy system was to prove the solution to the submarine problem.