Raid on Zeebrugge and Ostend 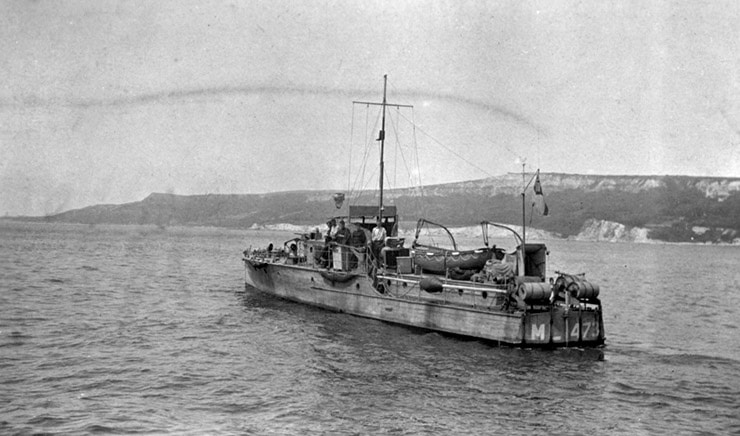 The raids against Zeebrugge and Ostend in April-May 1918 were spectacular and carried out with much courage and daring. A number of New Zealanders were involved, mainly from the Motor Boat Patrol.

One third of the New Zealanders involved were decorated, including two who received the Conspicuous Gallantry Medal.

The aim of the two complementary operations was to block the Bruges ship-canal at Zeebrugge and Ostend Harbour.

This had been proposed as early as November 1916 but not taken up. In late 1917, the proposal was re-examined and the result was OPERATION Z.O., promulgated on 7 April 1918.

This called for block ships (old cruisers filled with cement) to sink themselves in the two harbours, thereby stopping the enemy from being able to use them.

Three blockships plus two submarines were to block Zeebrugge and two blockships Ostend. At Zeebrugge an additional attack was to be made by an old cruiser, HMS Vindictive. Vindictive was to go alongside the mole, land a detachment of marines and seamen who would destroy the guns defending the harbour. They would then blow up as many installations as possible before withdrawing.

The force sailed on 11 April for the attack. However, early the next morning, when 16 miles from Zeebrugge the wind direction changed and began to blow from the south, the wrong direction for the essential smokescreen to be effective and the attack was cancelled.

CMB 33, did not return. The loss was more than just unfortunate as it ran aground near the entrance to the harbour.

On board the Germans found the operation orders for the attack. This directly contravened a specific instruction that operational orders should not be carried in a vessel during an operation.

Chief Motor Mechanic Roy Alexander of Auckland was awarded the Distinguished Service Medal for his part in this raid.

However, he later died of wounds received during the raid in England on 21 August, 1918.

Although the next time suitable conditions of tide and moon would not occur for another month, Admiral Keyes was able to convince the Admiralty that the Operation should be attempted at the next opportunity of the right tide, some two weeks later.

This, decision was made irrespective of the fact that it coincided with a full moon.

The attacks which took place on 23 April and the follow-up raid on 9 May were of great dash and daring. In the storming party on the mole was a company of seamen and marines from HMS New Zealand under Lieutenant Commander A.L. Harrison.

Lodwick had his Lewis gun blown out of his hands before leaving the ship, but recovered it and went ashore, the Lewis gun being hit by German bullets five or six times while he was on the mole. Around the time that the recall was sounded for the storming party, Lieutenant Commander Harrison regained consciousness and taking all the men he could find stormed the mole again.

All of these men were also killed or wounded. Harrison was killed and his body picked up by Able Seaman Eves who tried to carry him back on board before he was severely wounded and later taken prisoner.

In the Dunkirk cemetery lies a permanent reminder of New Zealand’s participation in the great raids on Zeebrugge and Ostend.

Motor Mechanic J.F.H. Batey of the Coastal Motor Boat CMB 33, is buried there. Batey’s body was washed ashore on 17 April 1918, he had been killed in action on 12 April.

During the raid on Ostend Lieutenant Malcolm Kirkwood was First Lieutenant of ML 532 with Captain Hamilton Benn, the Senior Officer of the ML Force embarked. The primary task of this vessel, one of three, was to rescue the crews of the blockships, Brilliant and Sirrius.

During the approach the block ships were illuminated by searchlights and became the subject of intense fire from the shore batteries.

ML 532 increased speed and went ahead of the two ships, making smoke.

In an attempt to follow Brilliant through the smoke, ML 532 came bow-on to the port side of the cruiser which had run aground, completely smashing the bows of the ML, shifting both engines on their beds and breaking the exhaust pipes, which filled the engine room with dangerous fumes.

Keeping the vessel afloat was a major achievement, but at the cost of the gassing of the engine room personnel.

After rescuing the crew of Brilliant, ML 276 towed ML 532 clear and Lieutenant Kirkwood was able to get one engine restarted before losing consciousness, however this enabled the vessel to reach England and he was awarded the Distinguished Service Cross.

FOR THREE SOLID WEEKS WE HAD THE THING HANGING OVER OUR HEADS, AND ALL OF US HAD REACHED THE STAGE WHERE WE DIDN’T CARE WHAT BECAME OF US. IT WOULD BE ALMOST IMPOSSIBLE TO DESCRIBE THE FEELINGS OF ANY OF US, BUT WE DID ACHE FOR THE TIME TO BE UP AND DOING. AS FOR SACRIFICE, WELL …. WE NEVER THOUGHT OF THAT.

On the night of 9/10 May, there was a further attempt to block Ostend, this time using Vindictive and Sappho, as block ships with 7 Monitors, 22 destroyers, 30 MLs and 10 CMBs. Shortly after the force left Dover, Sappho had to return to harbour, but as Ostend could effectively be blocked by one ship, the attack proceeded.

The first task was to mark the wrecks of Brilliant and Sirius and while this was being done CMBs launched torpedoes at the pier heads, thoroughly alerting the Germans.

Vindictive was navigated into the harbour blind, visibility being curtailed by smoke and a sea mist.

To confirm he was in position the Captain of Vindictive lit a special flare (1,000,000 candle power), which showed that he was about 200 yards from his planned position, but also gave the German gunners a target.

The ship was duly scuttled and MLs 254 and 276 closed to take off the crew. Both were badly hit, 254 close to sinking when HMS Warwick was able to take off everybody before it was scuttled.

ML 276 with CMM Chivers on board had 55 holes in the hull and the Commanding Officer later received the Victoria Cross and Chivers the Distinguished Service Medal.

The attacks were carried out with great courage and although there were over 500 casualties, there was also a well-deserved selection of gallantry medals.

As in many such instances, only a relatively few of those who deserved to be recognized, could be.

Nevertheless one third of the New Zealanders involved were decorated, including two who received the Conspicuous Gallantry Medal.

From an operational perspective, the raids were not successful, as the Germans continued to be able to operate submarines from the two ports much as they had done before the raids.