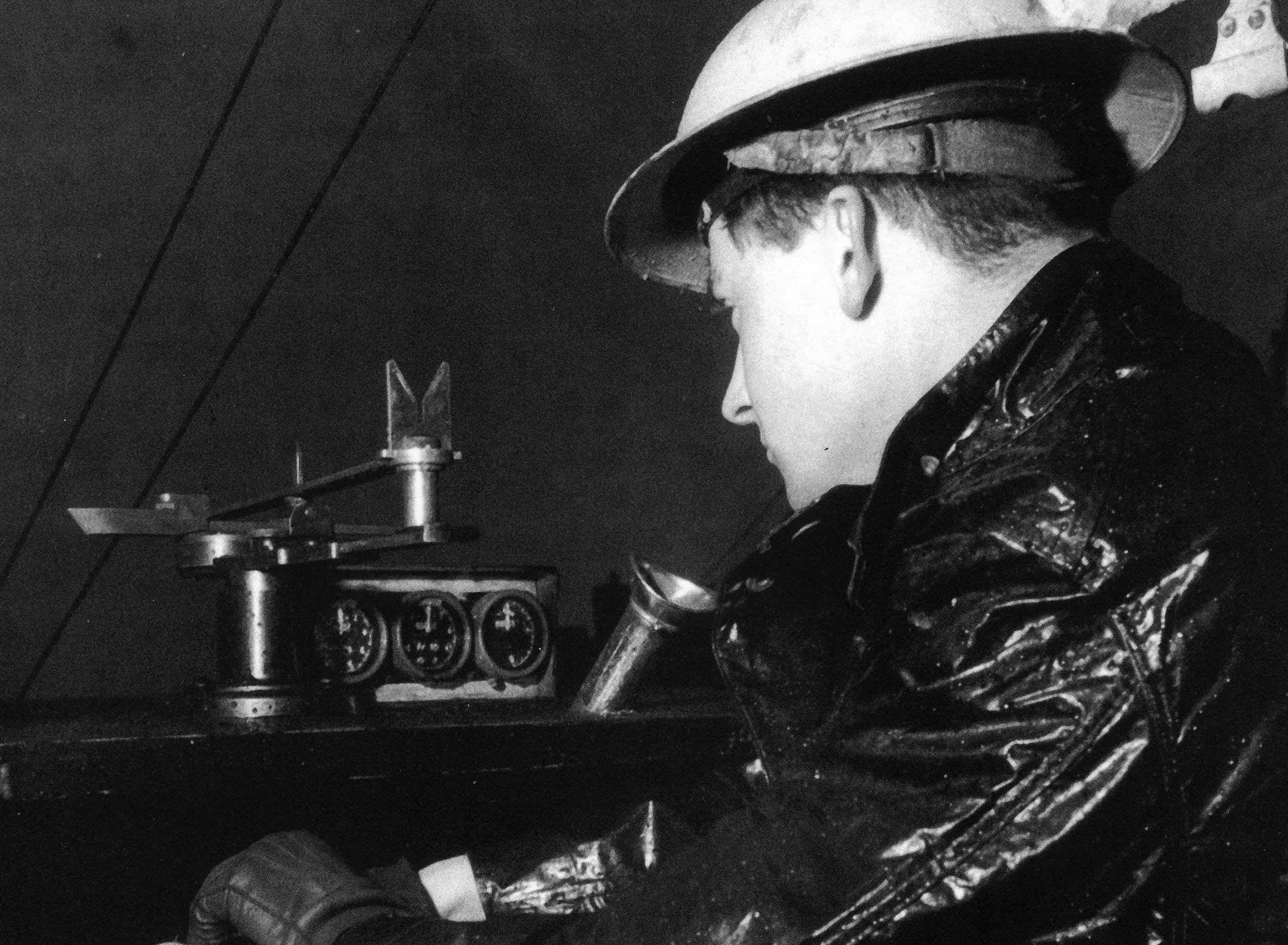 Reference no. APE 0116
Lt GJ Macdonald on bridge at Felixstowe 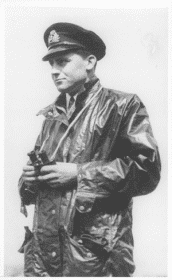 He was then selected as officer material under the Scheme B recruitment programme and along with other New Zealanders was sent to Britain aboard the SS Akaroa. He arrived in Britain in January 1941. He was first sent to the shore establishment HMS King Alfred located near Brighton for training as an officer. Some 55,000 Temporary Naval Reserve Officers would pass through this establishment during the Second World War. The course lasted twelve weeks. Candidates were taught how to command, how to give and take orders.  Ice-cream bikes were used to practice fleet manoeuvres which were also fitted with masts to practice signalling. Macdonald graduated first in his class.

He had wanted to serve with other New Zealanders aboard the cruiser HMS Neptune. This was refused and instead he chose Coastal Forces. A six week course followed at HMS St. Christopher in seamanship in small boats, handling, and gunnery. At the completion of the course Macdonald wanted to serve aboard a Motor Gun Boat (MGB) but was posted to Motor Torpedo Boats (MTB). He was promoted to Temporary Acting Sub-Lieutenant at 20 in 1941. This rank for was hostilities only. He would have to serve for twelve months before he would be confirmed in the rank. A number of New Zealanders found their way into Coastal Forces and saw a great deal of action, both in the English Channel and in the Mediterranean.   These small craft, engaging the enemy at an average range of 100 yards, even passing between the ships of enemy convoys to sink them with depth charges, required a special type of person. The RN had disposed of fast attack coastal craft in the interwar period. It was only in 1936 that nineteen new vessels were ordered. They were deployed at Hong Kong and Malta.

After completing the six week course he was posted to Northern Command at Felixstowe which was major naval base during the Second World War. The MTB flotillas were based at HMS Beehive.  It was a former RAF Flying Boat base used in the interwar period and was opposite the CinC Nore HQ at Harwich and across from HMS Ganges. It had the distinction of never having been successfully attacked by the Luftwaffe during the war.

The English Channel had a defensive set-up as follows:

This was all to protect coastal convoys travelling at 6-12 knots escorted by armed trawlers.

Macdonald’s first posting was MTB14 as midshipman. This craft used petrol engines, had a wooden hull, was capable of 33 knots and was armed with two torpedoes with no reloads and two twin mount machine guns. The torpedoes did not have a launcher they were dropped off the back of the MTB. This type of vessel had a complement of two officers and eight ratings.

He then served aboard MTB241. As for MTB14 it carried two torpedoes no reloads, one twin .50cal machinegun mount and two Vickers machineguns. As a twenty-year old Commanding Officer he was the youngest in the Commonwealth. He was then posted to MTB31in January 1942 as First Lieutenant. This craft carried a crew of ten. By this time a MTB’s armament consisted of two torpedo tubes (no reloads) and a twin .50cal machinegun mount in powered turret. The hull was an updated version of MTB14’s wooden hull, and the petrol engines were capable of 40 knots.  To allow the MTB to cruise at 16-17 knots silently while on operations Macdonald developed a dunfloat. This would one of many mechanical inventions he developed for operational use.

On 3 March 1942 while serving in MTB31 Macdonald took part in a successful attack on a German coastal ship had sunk it but was pursued by German E-boats and badly damaged. The CO of MTB31 was badly wounded and Macdonald took over. He organised the wounded and arranged to be rescued. In an account of this action he is described as ‘an imperturbable New Zealander.’[1] For this action he was awarded the Distinguished Service Cross.[2]

As the Coastal Forces expanded to meet the challenge posed by the German E-Boats Macdonald was soon to be given a higher command. He was given command of the 21st MTB Flotilla at the age of 21 after fellow officers petitioned the Coastal Forces Command. In June 1943 he was promoted to Temporary Acting Lieutenant with seniority from 1 October 1943. His reputation grew within the MTB service and a history of the Coastal Forces records that he had ‘an uncanny knack of always doing the right thing.’[3] At the same time the RN Coastal Forces were using the tactic of zone attacks against German shipping. The MTBs would operate in two groups. One would gain and hold the attention of the escorting E-Boats and torpedo boats whilst the other group attacked the merchant ships. Macdonald at the 21st Flotilla was in the thick of the action.

From February to June 1944 Macdonald participated in Operation MAPLE. This was minelaying with long-delay deploying mines as part of Operation NEPTUNE to protect the landing force from attack by German vessels. The 21st Flotilla operated with the 51st Motor Launch Flotilla escorting and protecting the minelayers. During these operations MTB241 was sunk on 30 March 1944 by a 4-inch (102mm) shell from German destroyer.

Macdonald’s award of the Distinguished Service Order (DSO) was given on 19 September 1944. This decoration was for an action off the Dutch Coast on the night of 4-5 July 1944. His 21st Flotilla consisted of MTB234 (his own vessel), MTB 224, MTB225 in one division and MTB 232, MTB244 in the other. The target for the Flotilla was a German coastal convoy of six vessels that had already been attacked on its way into a Dutch port near Den Helder. As the convoy departed the Flotilla would attack in a pincer movement. By this time the all Vosper MTBs had been equipped with the Dumblflow silencers that enabled the vessel to travel quietly at 24knots.  Macdonald’s division of three MTBs made three attacks on the convoy which were beaten off with heavy and accurate fire while the other division attempted to make a diversion.  Macdonald broke off contact and ordered the Flotilla to return to base.[4]

By now it was daylight and an unexpected contact another German convoy of seven ships was made by radar. Standing orders in the Flotilla was to attack at any opportunity even if the conditions did not favour the attackers. A torpedo run was made by Macdonald’s division and the MTBs turned away from the German ship at about 700 metres. The German ships were caught completely by surprise as indicated by the first rounds of the larger guns which were starshells. MTB224 was equipped with a twin-mounted 20mm Mk IX Oerlikon which proved invaluable in suppressing the German gunfire.  Seeing the action, the other division then joined in. Two ships had been hit by a torpedo and were sinking.  The surviving German vessels were circling the stricken vessels, something that was not standard operating procedure in facing MTBs. The second division fired at an M-class minesweeper and a coaster, hitting the minesweeper. The result was two ships sunk, one left burning and the others with various degrees of damage. MTB234 was struck by a baseplate from a starshell, and MTB224 received two hits from 20mm AP rounds. There were no casualties or other damage. [5]

As senior officer of the 21st MTB Flotilla, Temporary Lieutenant G.J. Macdonald handled Motor Torpedo Boats 225, 234, and 224 with great courage and skill on the night of 4-5 July 1944 in three gallant attempts to attack an heavily escorted enemy transport until it took refuge in port. On turning homeward the MTBs met a convoy of six ships (Macdonald’s sketch shows seven) and, though day had broken, in the face of intense fire sank two by torpedoes and damaged two others by gunfire.[6]

His next MTB was equipped with radar and he remained in command of the 21st Flotilla until the end of the war in Europe. In May 1945 he was part of the MTB fleet that took the surrender of the German E-Boats.[7]

In a report dated October 1944 Macdonald was noted as:

George Macdonald was awarded the Distinguished Service Cross twice and the Distinguished Service Order for service in Motor Torpedo Boats. He was also Mentioned-in-Despatches and received the Humane Award for the rescues of a Chief Petty Officer. He returned to New Zealand after demobilisation and became an engineer with the Wellington City Council and developed a number of other significant inventions.

What are the lessons that naval officers can learn from Macdonald’s experience?

The Navy Museum has in its collection the torpedo sighting device [as above] that Macdonald developed for use aboard MTBs. It was used in the following manner:

This was a simple, non-electro-mechanical tool that took moments to use, acknowledging the loss of night vision due to the use of tracers. This sight was mass produced by the RN. But most importantly, you had to be familiar with your ship to use it correctly. One can imagine trying to do this on a dark night in the English Channel, in a MTB with the German’s firing at you.

[1] Lieutenant-Commander Peter Scott, Battle of the Narrow Seas: A History of the Light Coastal Forces in the Channel and North Sea 1939-45, London: Country Life Limited, 1945, p. 62.